The lawsuit was filed Tuesday in Washington, D.C., on behalf of Khashoggi's fiancee Hatice Cengiz and Democracy for the Arab World Now or DAWN, the human rights organization that Khashoggi founded shortly before his death. It names Prince Mohammed and a host of Saudi Ministry of Interior officials, accusing them of a “brutal and brazen crime” that was the result of “weeks of planning" and premeditation.

“Jamal believed anything was possible in America and I place my trust in the American civil justice system to obtain a measure of justice and accountability," Cengiz said in a statement Tuesday. 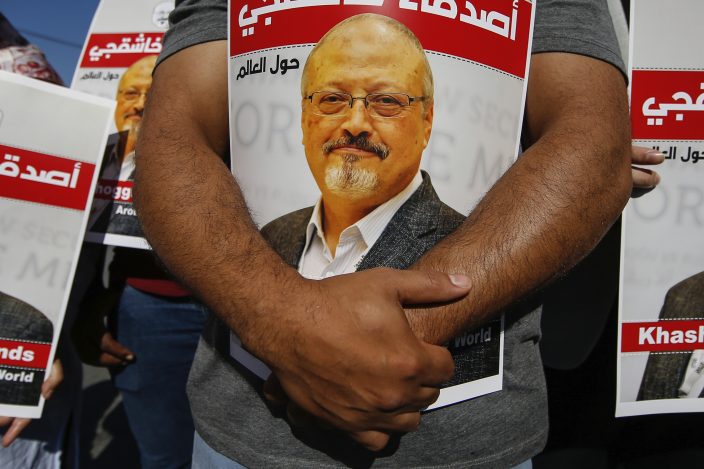 People hold posters of slain Saudi journalist Jamal Khashoggi, near the Saudi Arabia consulate in Istanbul, marking the two-year anniversary of his death, Friday, Oct. 2, 2020. The gathering was held outside the consulate building, starting at 1:14 p.m. (1014 GMT) marking the time Khashoggi walked into the building where he met his demise. The posters read in Arabic:' Khashoggi's Friends Around the World'. (AP PhotoEmrah Gurel)

Khashoggi disappeared on Oct. 2, 2018 after entering the Saudi consulate in Istanbul, seeking documents that would allow him to marry Cengiz, a Turkish national who was waiting outside the building. He never emerged.

Turkish officials allege Khashoggi was killed and then dismembered with a bone saw inside the consulate. His body has not been found. Turkey apparently had the consulate bugged and shared audio of the killing with the C.I.A., among others.

Western intelligence agencies, as well as the U.S. Congress, have said the crown prince bears ultimate responsibility for the killing and that an operation of this magnitude could not have happened without his knowledge.

A prominent government critic, Khashoggi had founded DAWN in order to push for democratic and human rights reform in Saudi Arabia and throughout the Arab world. Tuesday's suit alleges that the defendants “saw Mr. Khashoggi’s actions in the United States as an existential threat” to their political interests and sought to lure him inside the consulate where a specially dispatched hit squad awaited.

“Defendants resolved to put an end to Mr. Khashoggi’s efforts by any means necessary,” the suit states.

Saudi officials initially offering conflicting accounts, including claiming that Khashoggi had left the building unharmed. But amid mounting international pressure, they settled on the explanation that Khashoggi's death was a tragic accident, saying that the team was under orders to merely persuade him to return to the kingdom. The official account is that the meeting unexpectedly turned violent, resulting in Khashoggi's accidental death.

In September, a Saudi court issued a final verdict sentencing five mid-level officials and operatives to 20-year jail sentences. The court had originally ordered the death penalty, but reduced the punishment after Khashoggi's son Salah, who lives in Saudi Arabia and has received financial compensation from the royal court for his father’s killing, announced that he forgave the defendants. Three others were sentenced to lesser jail terms. The Saudi court did not implicate Prince Mohammed or other senior Interior Ministry officials.