The Latest on Game 1 of the World Series (all times local):

Pentatonix will sing the national anthem before Game 1 of the World Series between the Los Angeles Dodgers and the Tampa Bay Rays. The Grammy-winning a cappella group from Arlington, Texas, prerecorded the song that will be shown on video at Globe Life Field. 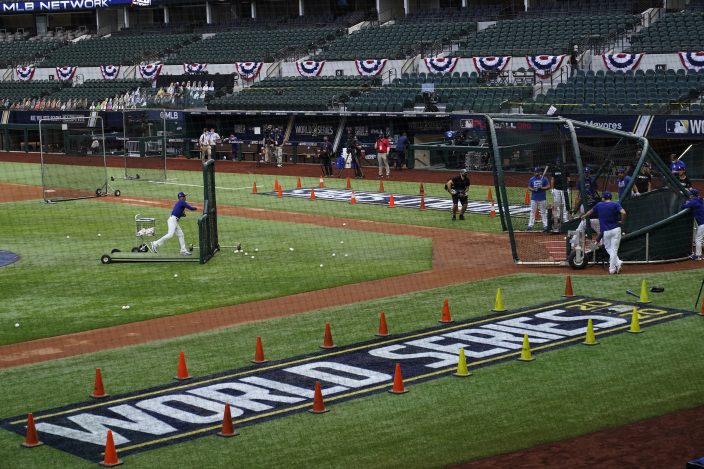 Members on the Los Angeles Dodgers take warms up during batting practice before Game 1 of the baseball World Series Series against the Tampa Bay Rays Tuesday, Oct. 20, 2020, in Arlington, Texas. (AP PhotoTony Gutierrez)

Texas Gov. Greg Abbott will give the call of “Play ball!”

Ceremonial first pitch duties will be handled by four frontline healthcare workers who are serving during the coronavirus pandemic. Married nurses Jamie Edens and Ryan Ward are from Tulsa, Oklahoma. Erika Combs is a nurse in Dallas. Brittney Burns is a nurse practitioner from San Antonio.

Cody Bellinger was in his normal spot in the starting lineup for the Los Angeles Dodgers in Game 1 of the World Series against the Tampa Bay Rays.

Bellinger was batting sixth and playing center field Tuesday night, two days after knocking his right shoulder out of whack during his emphatic celebration after hitting a go-ahead homer in the clinching Game 7 of the National League Championship Series.

Kiermaier was still dealing with a sore left wrist after getting hit by a 99 mph fastball in Game 3 of the AL Championship Series against Houston.

Organizers of the March for Life, ...