Tua Tagovailoa will make his first NFL start next week for the Miami Dolphins, who are turning to him to replace Ryan Fitzpatrick, a person familiar with the team's decision said Tuesday.

The person confirmed the decision to The Associated Press on condition on anonymity because the Dolphins hadn't made an announcement.

The change by coach Brian Flores will come after the Dolphins’ bye this week and has been long anticipated, but the timing is surprising because the team won its past two games to improve to 3-3. Tagovailoa will start at home against the Los Angeles Rams on Nov. 1. 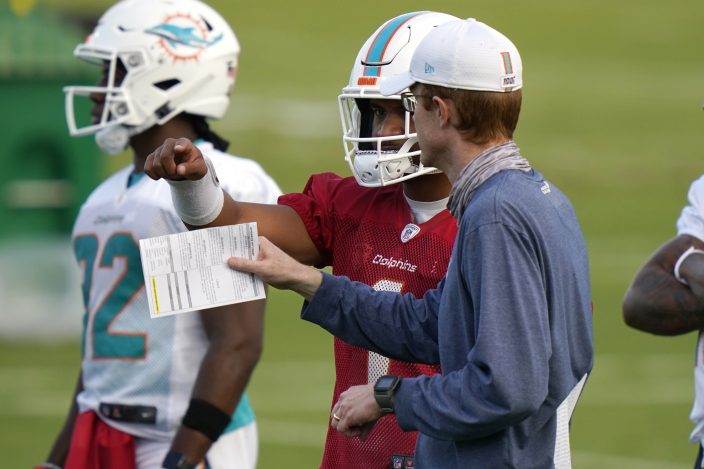 Tagovailoa made his pro debut in mop-up duty at the end of Miami's 24-0 victory Sunday over the New York Jets. He will become the 22nd quarterback to start for the Dolphins since Dan Marino retired following the 1999 season.

Touted as a potential franchise quarterback, the dynamic Tagovailoa raises the profile of a team that has been off the NFL radar for much of the past two decades. He was drafted in April with the fifth overall pick — the highest choice Miami has devoted to a QB since Bob Griese in 1967.

Tagovailoa is coming back from a serious hip injury that cut short his Alabama career last November. The recovery slowed his preparation to assume a starting NFL job, as did the coronavirus pandemic that forced the cancellation of offseason drills and exhibition games. Fitzpatrick, 37, described himself during training camp as a placeholder. He is being benched even though he ranks fifth in the NFL in completion percentage, and the Dolphins are on pace for their highest-scoring season since 1986 at 26.7 points per game.

Tagovailoa went 2 for 2 for 9 yards against the Jets, and after the game spent several minutes sitting alone on the field and on his phone with his parents.

“It was exciting to get out there,” he said following the game. “The most important thing that came out of my conversation with my parents was just that they were happy to see me out there and playing again.”

Tagovailoa also expressed gratitude Sunday for the support Fitzpatrick has given him.

“Good drive, bad drive, he comes to the sideline and just talks through his process with why he did some things,” Tagovailoa said. “I’m very fortunate to have a mentor like him who is just very encouraging on the field, and he’s just very personable off the field, as well.”

Fitzpatrick led cheers from the sideline when Tagovailoa took the field for the first time in 11 months.

“That was a cool moment for him,” Fitzpatrick said. "We were all excited to see him get out there.”

Tagovailoa takes over an offense much-improved from a year ago, when Miami went 5-11 under rookie coach Flores. For the first time in franchise history, the Dolphins have started three draft picks in the offensive line, and they've allowed only 10 sacks after giving up a league-high 58 last year.

At Alabama, Tagovailoa threw 76 touchdown passes in 24 starts over his final two seasons. He replaced Jalen Hurts in the national championship game in January 2018 and rallied the Crimson Tide past Georgia, and the following season he was the Heisman Trophy runner-up.

“Most guys don’t have to go through what Tua went through in terms of the adversity that he had to overcome from an injury standpoint,” Alabama coach Nick Saban said Monday. "We hope that he does extremely well, and it surely won’t surprise me if that’s the case.”

Australia wins toss, opts to bat in series opener vs In ...

As 1st NFL start looms, Tua says he's not caught up in hype