Kyle Berkshire spent two years playing for the University of North Texas before his golf path switched over to power, and he capped off his remarkable surge by winning the World Long Drive Championship last year.

He is a main inspiration for U.S. Open champion Bryson DeChambeau, who is striving to hit the ball as far as he can. They have never met in person, but they speak regularly on the phone. It's a two-way street.

“He helps me out a little bit with the golf side, so it works out pretty good,” Berkshire said. “He's trying to gain distance. I'm trying to sharpen my game.” 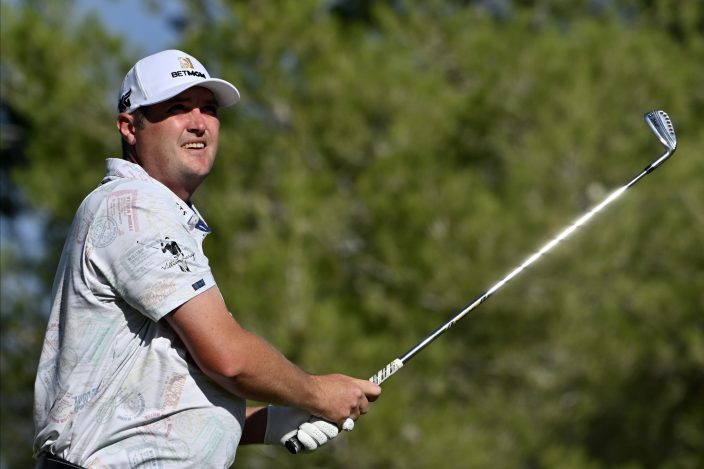 Berkshire, a 23-year-old from Maryland whose ball speed has topped out — so far — at about 230 mph, is ready to return to the more conventional game and hopes to eventually earn his way into tour events.

He said his handicap is at plus-3, still not quite where it was at North Texas, but he's making progress. And he's learned that working on his short game and shot-making is not affecting his ability to launch shots in the World Long Drive events.

“My last event I think was the best I've ever been,” he said. “The four weeks before, I didn't do any long drive. The night before the event, I was working on my wedges.” 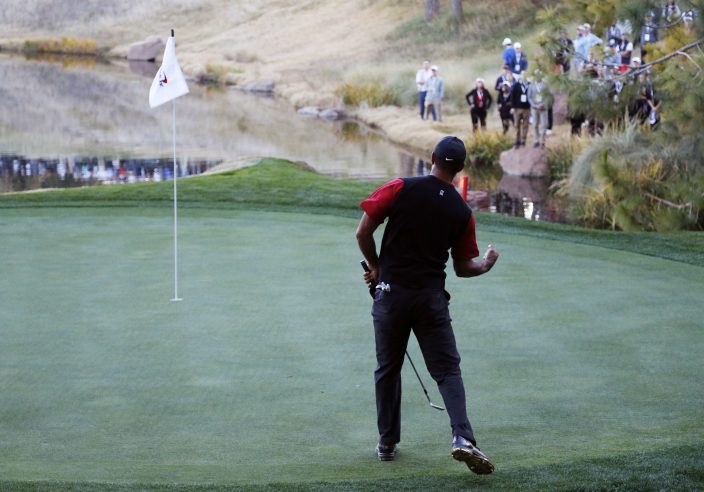 FILE - In this Nov. 23, 2018, file photo, Tiger Woods celebrates after making a chip into the 17th hole during a golf match against Phil Mickelson at Shadow Creek golf course in Las Vegas. Shadow Creek is back in the spotlight this week as it hosts the CJ Cup, typically played in South Korea. (AP PhotoJohn Locher, File)

Former champion Jamie Sadlowski is the most prominent player from the World Long Drive arena to play on pro tours. He has been in two PGA Tour events, at Colonial and the Safeway Open in 2017, missing the cut in both. But he has made a number of cuts on the Mackenzie Tour in Canada, and one cut on what is now the Korn Ferry Tour in 2015.

Berkshire wants to get his handicap index to a “solid (plus-)5." The first stop is mini-tours in Florida.

“I want to develop my game so if I get offered a sponsor exemption, I can prove I belong there,” he said. “I want to be at least able to make checks on the mini-tour."

As for DeChambeau? Berkshire is a big fan and hopes the U.S. Open champion can get a 48-inch driver ready before going to the Masters next month.

“If he can get the 48-inch driver, he will shoot 20 under or better,” Berkshire said. “It's going to be a slaughter.”

The Mayakoba Golf Classic in Mexico on Dec. 3-6 is the last PGA Tour-sanctioned event of 2020, and it won't have to worry about being upstaged by golf's biggest stars playing in the Bahamas.

The Hero World Challenge, hosted by Tiger Woods, has been canceled because of the COVID-19 pandemic. The 18-man event features only players from the top 50. Henrik Stenson is the defending champion after outlasting Jon Rahm on the back nine of Albany Golf Club last year.

Tournament organizers attributed the cancellation to “global restrictions” and other developments from the pandemic. They said it would return to Albany in 2021.

NO REGRETS FOR KO

Jin Young Ko last played on the LPGA Tour in November at the CME Group Tour Championship in Florida, ending her season by sweeping all the major awards. She has chosen to ride out the COVID-19 pandemic at home in South Korea and has no regrets.

She is the only top player to have skipped all three majors. Ko plans to return Nov. 19-22 in Florida and play the following two weeks, concluding with the U.S. Women’s Open.

“Given that health and safety are the most important things, this was an unavoidable choice,” she told Yonhap News Agency last week before her runner-up finish in a Korean LPGA event. “My parents were worried that something might happen to me, and I am their only daughter. I couldn’t just leave them behind.”

Ko remains No. 1 in the world. She has played five times on the KLPGA, with three top 10s. She will be No. 1 when she returns to America, with only one event this week ahead of her return at the Pelican Women’s Championship.

“I am not getting caught up in results this year,” Ko said. “Winning tournaments and being world No. 1 is important, but what I am doing now is investing for the future. To make sure I will stay competitive for a long time, I am working on my body and my swing.”

It's not what you think. Not just anybody can go on a shopping spree.

The club is offering the online shopping only to patrons who are on record as having tickets. Those who obtain tickets or badges from a secondary source are not in the club's ledger and won't be getting a special access code.

The online system will allow the patrons of record to browse as often as they would like. But they are allowed only two transactions.

The tough news for Dustin Johnson is having to miss two big events because of his positive test for the coronavirus. That includes the Zozo Championship, effectively a home game for the world's No. 1 player because he's a member at Sherwood Country Club and his de facto in-laws — Wayne and Janet Gretzky — live there.

He is expected to return in two weeks at the Houston Open. And he won't have to be tested for the coronavirus in Houston, or the following week at the Masters, or anywhere for the next three months.

According to the PGA Tour, the CDC updated its guidelines this summer to say tests are not necessary for three months after someone has completed a 10-day isolation period.

The reasons are that a PCR test does not distinguish between live virus and dead, remnant virus. So a player — and this came up at Muirfield Village in July — might still be testing positive for months after the self-isolation.

The CDC also has said people likely are immune for at least three months after a positive test.

So the only test Johnson has to worry about is Augusta National, still no easy task.

Tiger Woods says he is not playing next week in the Bermuda Championship and has not made up his mind whether to play the Houston Open. He has never played the week before the Masters. ... Among players with full PGA Tour status, Cameron Tringale has won the most money ($11,945,616) without ever having won. He has made 284 starts on the PGA Tour as a pro dating to 2010. ... Jason Kokrak was already in the Masters without having won because he made it to the Tour Championship in 2019. His only concern was not being able to get his children involved in the Par 3 Tournament, which will not be held in November. With his victory at Shadow Creek, Kokrak qualified for next year's Masters, too. ... The Joburg Open in South Africa has been added to the European Tour schedule for Nov. 19-22. It last was part of the European Tour schedule three years ago.

Tiger Woods is defending a title for the first time since the Bridgestone Invitational in 2014. He didn’t qualify to return to the Tour Championship in 2019, and his title defense at the Masters was pushed back until next month.

“My game is a little bit like a jack-in-the-box. We just keep spinning it and it pops up every once in a while.” — Paul Goydos.