The Los Angeles Dodgers have several options for pitching Game 2 of the World Series, and manager Dave Roberts preferred to keep it that way. The only certainly is that they won't be depending on only one guy.

“It’s going to be a bullpen, whatever, kind of game, using various arms,” Roberts said before Game 1 Tuesday night. “Who starts that game, I just don’t know yet.”

The Tampa Bay Rays have 2018 AL Cy Young Award winner Blake Snell lined up to start Wednesday night. Snell was 4-2 with a 3.24 ERA in 11 regular-season starts this year, and is 2-2 with a 3.20 ERA in four postseason starts. 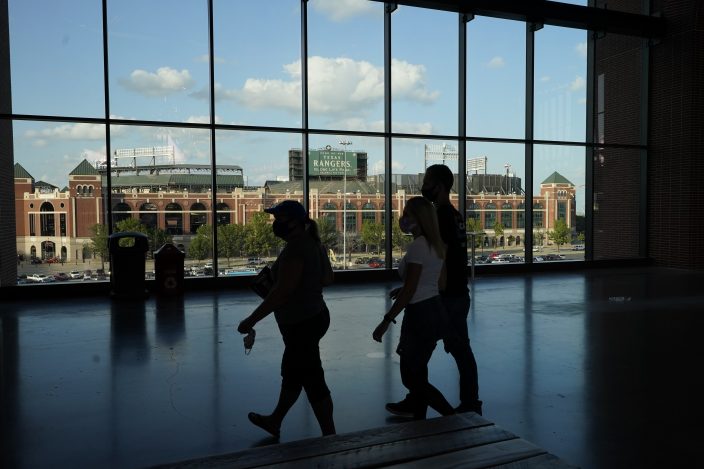 Globe Life Park, the former home of the Texas Rangers is visible through the windows of the of the new Globe Life Park as fans gather for Game 1 of the baseball World Series Series between the Los Angeles Dodgers and the Tampa Bay Rays Tuesday, Oct. 20, 2020, in Arlington, Texas. (AP PhotoSue Ogrocki)

Among the options for the Dodgers is Julio Urias, the 24-year-old lefty already in his fourth postseason. He closed out Game 7 of the NL Championship Series by retiring the last nine Atlanta batters on 39 pitches. He is 4-0 in his four appearances this postseason. His only start was NLCS Game 3, when he pitched five innings in a 15-3 win when the Dodgers had a record 11-run first before he threw his first pitch.

Dustin May has started three of his five games, but all of his appearances have been two innings of less. Fellow rookie right-hander and NLCS Game 2 starter Tony Gonsolin is also in the mix.

Depending on if and how Urias is used before then, he could also be a potential starter for Game 4, though Roberts again was revealing no plans. 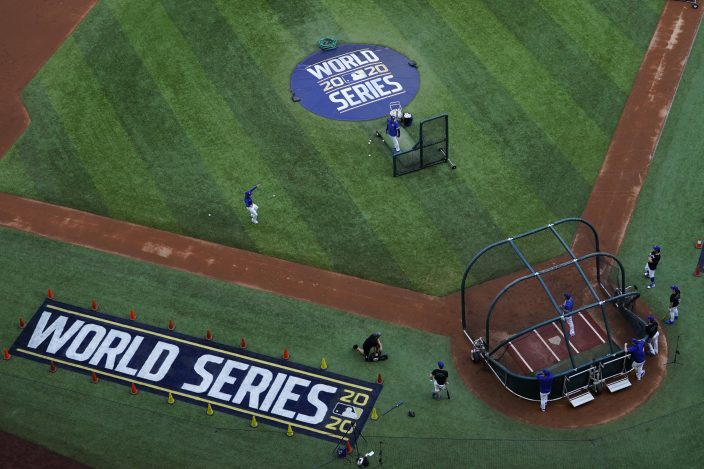 “To keep that optionality just makes sense, and to have Julio be in with us and understanding how we value him, certainly it’s helpful,” Roberts said.

Snell has faced the Dodgers only once in his career, in September 2019 at Dodger Stadium, when he stuck out four while retiring all six batters he faced in his return from the 10-day injured list. 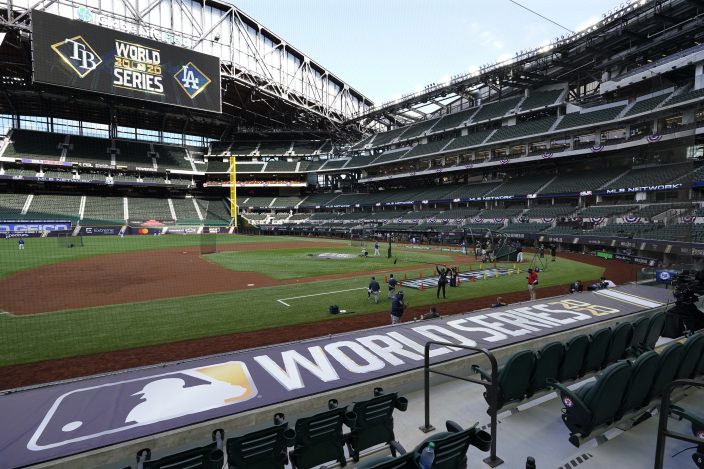 Members of the Tampa Bay Rays warms up during batting practice before Game 1 of the baseball World Series against the Los Angeles Dodgers Tuesday, Oct. 20, 2020, in Arlington, Texas. (AP PhotoTony Gutierrez)

Before Kevin Cash was hired as a first-time manager with the Tampa Bay Rays in December 2014, he was also interviewed by the Texas Rangers and was one the finalists for their vacancy that offseason.

Now Cash is leading the Rays in their first World Series since 2008, which is being played in the Rangers' new $1.2 billion stadium with a retractable roof.

Cash said he is still “extremely appreciative” of the opportunity the Rangers presented in that interview process, and said there was a time then that he was excited about whether he would get that job. 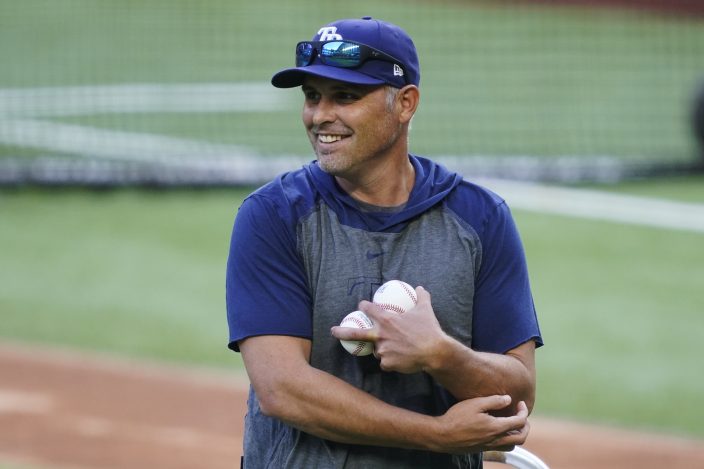 “But saying that, I’m pretty thrilled to be where I’m at, and in Tampa with all of the people I get to work with on a daily basis,” Cash said before Game 1.

Jeff Banister got the Rangers job after the 2014 season. He won AL West titles his first two seasons, and was there two more years before Dodgers third base coach Chris Woodward replaced him two years ago.

While the Rays had an AL-best 40-20 record in MLB's pandemic-shortened regular season, the Rangers were at the bottom of the AL with a 22-38 record.

Like it was throughout the National League Division Series and NLCS games that the Dodgers played there, the retractable roof at Globe Life Field was open for the World Series opener.

Major League Baseball plans to keep the roof open through the playoffs, except in the case of rain. There is no wet weather in the immediate forecast.

It was a pleasant night for the first World Series game played in Arlington since 2011, when the Rangers played in their second consecutive World Series. There were clear skies with the temperature expected to drop from the low 80s to mid-70s by midnight.