Latricia Robinson donned a surgical mask and marched into the Pinellas County Supervisor of Elections office on a recent day to drop off her ballot, one of more than 135,000 people in the Florida county to vote early so far this election season.

The 48-year-old St. Petersburg resident said the pandemic, racial tension and the harsh overall tenor of politics all weighed heavily on her this year. "This is the first time I've seen the world in such an uproar," she said after voting for Democratic presidential candidate Joe Biden. “We’re in chaos, and that's not the way to go."

As the campaign enters its final two weeks, Florida has again emerged as a critical state, and Pinellas, one of the largest counties in the state, is one of those places likely to track the final outcome. 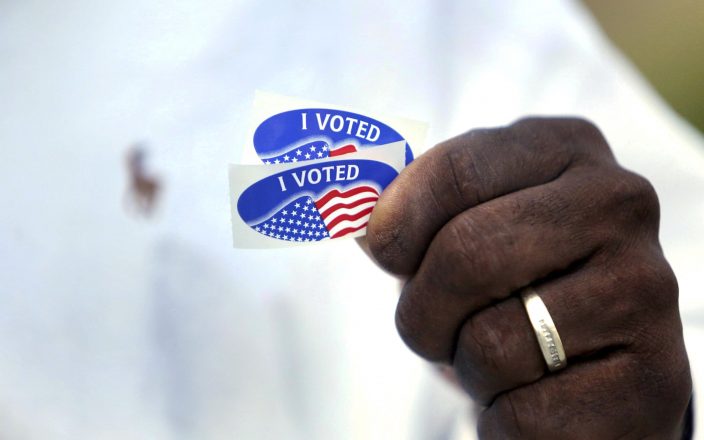 FILE - In this Monday, Oct. 19, 2020, file photo, Randy McKinney, of Clearwater, holds "I Voted" stickers moments after casting his ballot at the Supervisor of Elections Office at the Pinellas County Courthouse during early voting in Clearwater, Fla. Florida's Pinellas County is one to watch on election night. It was one of only four counties in Florida to switch from Obama to Trump. One thing everyone can agree on: Keep an eye on Pinellas on election night because it's a barometer for broader trends in the state and possibly the nation. (Douglas R. CliffordTampa Bay Times via AP, File)

“It is certainly a barometer of the broader trends,” said Daniel Smith, a political science professor at the University of Florida. ”It’s a dynamic county. It’s a good place to be watching the returns.”

Perched on the western tip of Florida’s famed Interstate 4 corridor, Pinellas is hard to categorize as its voters straddle the liberal-conservative divide. Democrat Barack Obama won the county twice, but then voters turned to Republican Donald Trump, by a mere 5,500 votes, and Pinellas was the largest of only four counties in the state to switch from Obama to Trump.

“It shifted further to the right than the state as a whole did,” said political analyst Kyle Kondik of the University of Virginia. 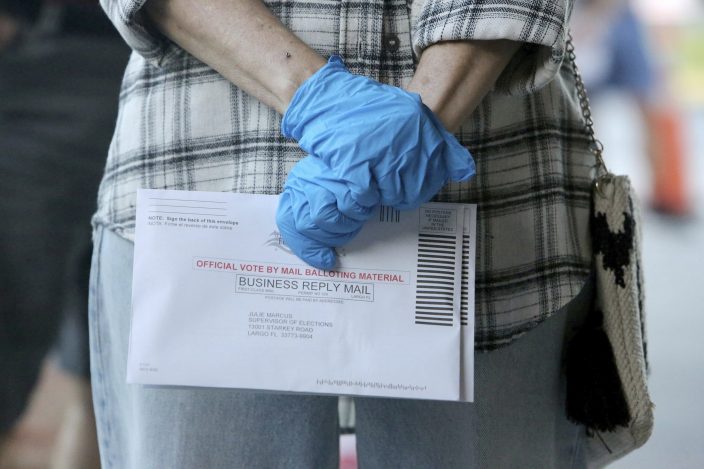 Or did it? In 2018, Pinellas voted for Democrats Andrew Gillum for governor and Bill Nelson for senate. Both lost.

Part of the reason it's so hard to capture the mood of the electorate here is because it's really three distinct regions in one. Pinellas is a peninsula, sandwiched between the Gulf of Mexico and Tampa Bay, and is the most densely populated county in the state. There are just over 713,000 registered voters, with slightly more Democrats registered than Republicans. No Party Affiliation voters come in a close third.

Its largest city — St. Petersburg — is in the south. It's home to a vibrant and historic Black community, one that's traditionally voted for Democrats. In recent years, the city has also become something of a hipster haven, with a proliferation of breweries, indie street markets selling kombucha and younger folks moving to modern condos located in the picturesque downtown.

Generally, the city is seen as a liberal stronghold, with an LGBTQ flag that flies above City Hall during Pride month and a mayor who often criticizes Republican Gov. Ron DeSantis.

In mid-county, there's sprawl and suburban families. Many commute to either St. Petersburg or across the bay to Tampa. They're concerned about taxes, health care and schools.

The northern part of the county is no less crowded, and there are lots of families there, too. But there are also large communities of older voters, and they tend to be more conservative and worried about issues like Social Security.

And to the west are a string of barrier island communities and sugar sand beaches. Those voters lean wealthy and conservative.

“The only segment of that area that's truly up for grabs is the central core,” said Darryl Paulson, a professor emeritus of government at the University of South Florida St. Petersburg.

Pinellas hasn’t changed much in terms of total population over the years. It’s hovered around a million residents for two decades unlike the robust growth seen in Miami, Tampa and Orlando. Pinellas has gained Hispanic residents but not at the same pace as other large counties. Its Black population has stayed mostly the same.

The pandemic — and its associated economic implications — is probably the top issue of most voters this year, especially among Democrats, who hold a slight advantage in terms of registered voters, Paulson said.

“Pinellas has been hit harder by the virus than other counties in other states,” he said. “Democrats are keeping focus on that issue. The whole state of Florida's economy is based on tourism, and it's no different in Pinellas.”

About 23,000 people have been diagnosed with the coronavirus in the county, according to state statistics, and there have been just under 800 deaths, the majority of them elderly people.

Those statistics were fresh on the minds of a trio of older friends walking into the county's supervisor of elections office on a recent day to drop off ballots.

“Look at the mess the country's in,” said 73-year-old Lee Whipple. “We've got the wrong man and the wrong party leading the country.”

“A womanizer,” Whipple chimed in.

All three said they were terrified of the coronavirus, and they cast ballots for Biden.

But some Republicans in Pinellas think Trump's done a great job with the pandemic and believe there are many who will support him.

“There was nothing in the Democrats' eyes that he could have done right,” said Alexis Selby, a 32-year-old St. Petersburg investment real estate agent. “Had he shut the whole country down, they would've faulted him for that, too. America is better now than it was four years ago. Even with this crazy pandemic, I think this country is better off.”

Selby says she wears Trump-branded campaign apparel around the city and gets a lot of support.

“There's a huge silent majority coming out of the woodwork,” she said.

Down-ballot candidates for state House seats say voters they've spoken with talk nonstop about the pandemic, but also say that they might split the ticket when voting for president and other seats.

“Democrats here are more open to displaying their love for their candidate. Republicans hide their love for Trump for fear of getting a brick through their window,” observed Matt Tido, a Republican statehouse candidate in St. Petersburg. “I can't predict which way it will go."

Tido noticed that he's seen a lot of newer, younger voters in Pinellas this year and isn't entirely sure how that will ultimately affect the results.

There's one thing everyone can agree on: Keep an eye on Pinellas on election night because it just might pick the presidential winner as it reflects the nation's deeply divided mood.

A federal appeals court in Philade ...

Florida GOP fights to animate Trump's base without president

Florida could be knockout punch for Sanders’ 2020 campaign