MELBOURNE, Australia — Australian authorities say they're treating a COVID-19 case in the city of Melbourne as a rare reinfection.

The only coronavirus case reported in the former hot spot of Victoria state on Tuesday had also tested positive to COVID-19 in July.

Victoria Premier Dan Andrews said Wednesday an expert panel had decided to classify the case as a reinfection rather than shedding viral remnants of the July infection. 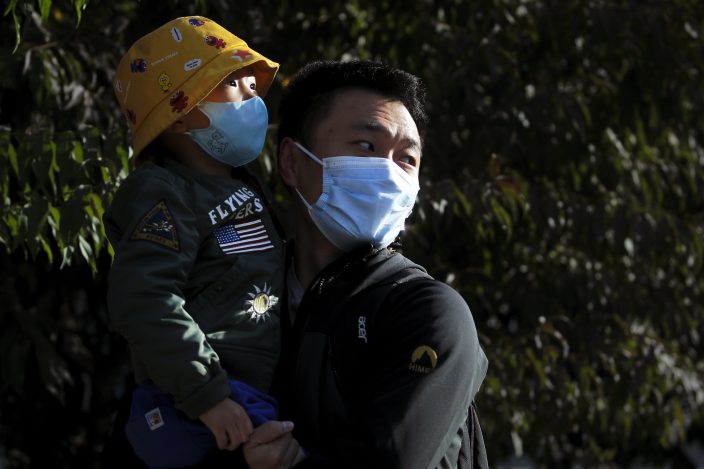 A man holds a child, both wearing face masks to help curb the spread of the coronavirus look as they wait to cross a street in Beijing, Wednesday, Oct. 21, 2020. (AP PhotoAndy Wong)

Andrews says the classification reflected “an abundance of caution” rather than conclusive evidence. He assumed further testing would be conducted into the case in search of a definitive result.

Melbourne has been in lockdown since early July, but restrictions in Australia’s second-largest city are easing this week as daily infection tallies remain low. 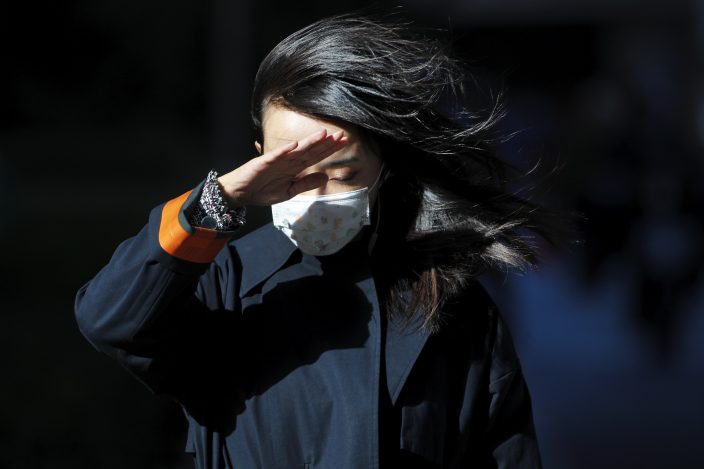 A woman wearing a face mask to help curb the spread of the coronavirus uses her hand to shield from the wind on a street in Beijing, Wednesday, Oct. 21, 2020. (AP PhotoAndy Wong)

— Leaders in US, Europe divided on response to surging virus 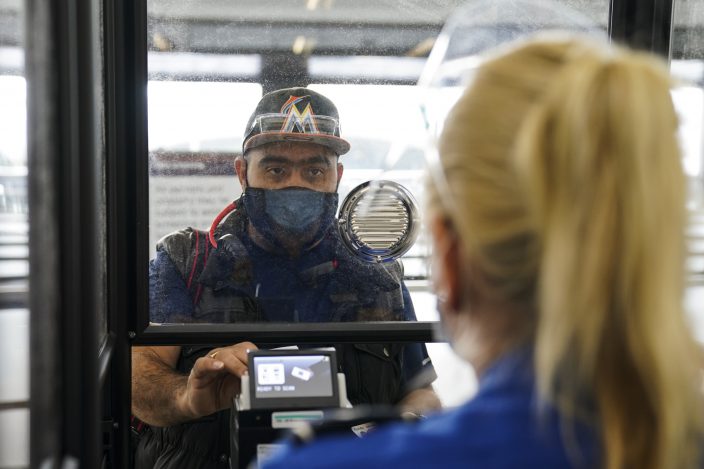 — Some teenage girls in Nairobi have turned to sex work to help feed their families. They cannot remember how many men they have had to sleep with since their schools closed this year.

— South Korea may be one of the world’s most wired nations, but remote learning is a challenge for many students and is particularly worrisome in a country so obsessed with education that 70% of high school graduates attend university.

— British Prime Minister Boris Johnson is imposing strict coronavirus restrictions on England’s second-largest urban area, after talks with officials in Greater Manchester collapsed over how much financial aid should be handed to people whose livelihoods will be hit by the new measures. 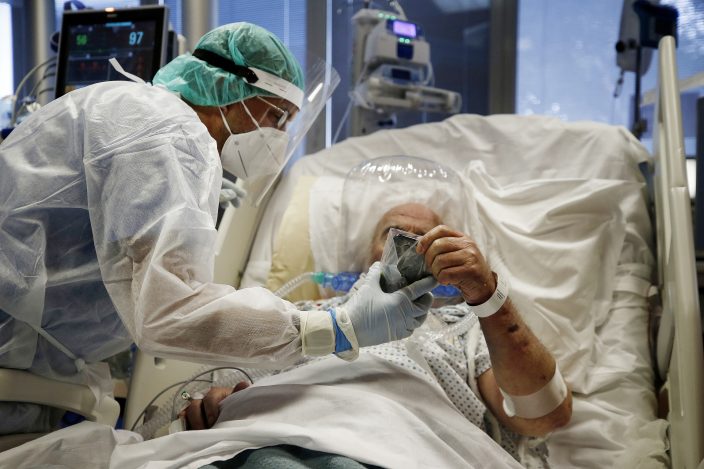 Medics tend to a COVID-19 patient at the intensive care unit of Casal Palocco hospital in Rome Tuesday, Oct. 20, 2020. The new surge of cases requiring hospitalization is causing worries in the Country that suffered the second highest toll in Europe during the Spring, as 10,874 new cases and 89 victims were registered today. (Cecilia FabianoLaPresse via AP) 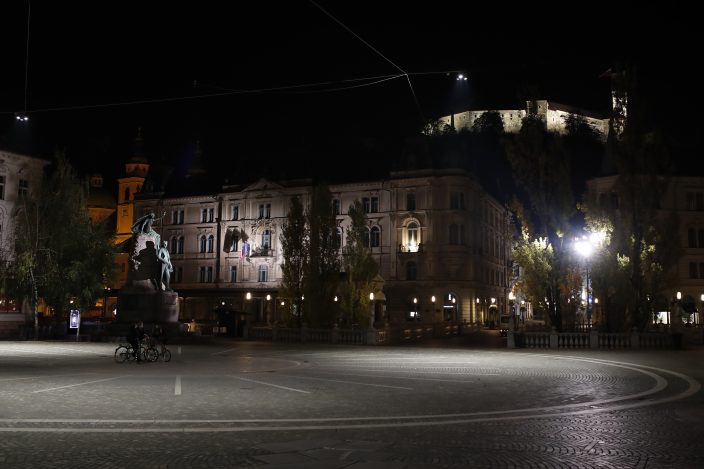 A view of the deserted main square due to the COVID-19 restrictive measures in Ljubljana, Slovenia, Tuesday, Oct. 20, 2020. Slovenia has introduced a nationwide overnight curfew in an effort to control the spread of the new coronavirus. (AP Photo)

A total of 235 crew from Russia and Ukraine were on the flight chartered by three fishing companies. Before leaving Moscow, they were supposed to have self-isolated for two weeks and tested negative for the virus. All remain in quarantine at a Christchurch hotel, and health officials say they expect more to test positive.

One of the companies says the workers were brought in because the future of an important industry is at stake. The company says it uses foreign crew because New Zealand workers either aren’t adequately trained or willing to do the work.

SAN FRANCISCO — A California private school has been ordered to pay $15,000 for defying a judge’s order to close classrooms and stop in-person teaching. 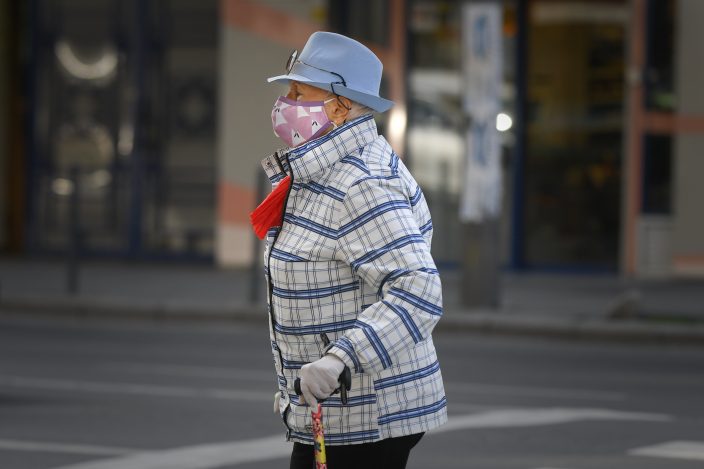 A woman wears a face mask for protection against COVID-19 infection while crossing a street in Bucharest, Tuesday, Oct. 20, 2020. Local authorities imposed the use of face masks in all public spaces, indoors and outdoors, closed schools, restaurants, theatres and cinemas after the rate of COVID-19 infections went above 3 cases per 1000 inhabitants in the Romanian capital Bucharest. (AP PhotoAndreea Alexandru)

It may be the first judgment of its kind against a California school for violating health orders aimed at slowing the spread of the coronavirus.

BOISE, Idaho — Idaho is seeing its largest coronavirus spike since the pandemic began, with the number of new cases increasing 46.5% over the past two weeks.

That has some health care experts urging Gov. Brad Little to take additional action to slow the spread of the virus.

The governor has said the responsibility for efforts to slow the virus falls on individuals. He urges people to wear masks, practice social distancing and wash their hands.

Gov. Jared Polis said Tuesday that he will instead encourage the people of Colorado to take responsibility for mask wearing, social distancing, getting tested, self-quarantining and other behaviors to stem the virus’s spread.

Polis says roughly 80% of the pandemic fight comes down to personal decisions. He also says local health agencies are best suited to deal with any rising cases among their residents.

SEATTLE — Washington state Gov. Jay Inslee is requiring colleges and universities to provide quarantine facilities for all students if they are exposed to the coronavirus.

The governor on Tuesday issued more restrictions for higher education campuses as the University of Washington struggles to contain an outbreak in its fraternities and sororities. There also have been outbreaks in Whitman County, home of Washington State University.

The new guidelines require colleges to provide isolation and quarantine facilities for Greek system houses, communal off-campus homes, students living in dorms and other personnel if they don’t have a place to go. Colleges without dorms or residential facilities will have to devise plans for addressing student and staff needs for isolation and quarantine in the event of exposure.

ANN ARBOR, Mich. — Students at the University of Michigan are being ordered to stay in place for two weeks after a surge of coronavirus cases driven by social gatherings on and off campus.

Local health officials said Tuesday that the surge is overwhelming their ability to confront the pandemic. Officials say coronavirus cases related to the university represent 61% of the total in Washtenaw County, compared to just 2% in August.

More than 1,000 students have been infected since the start of fall term despite limits on gatherings and classes that are mostly held online. Undergraduate students can attend in-person classes and also leave their residences for exercise, work, food, medical appointments, voting and religious services.

In response to the order, university President Mark Schlissel says even more undergraduate classes will shift to remote instruction. Students who want to leave campus housing for the balance of the term could receive a refund or credit.

NEW YORK — A new study shows that older workers are facing higher unemployment than midcareer workers amid the coronavirus pandemic.

The study released Tuesday from researchers with the New School university in New York City found that workers 55 and older lost jobs sooner, were rehired slower and continue to face higher job losses than their counterparts ages 35 to 54.

The researchers say that from April through September, the older workers’ unemployment rate was 9.7% compared to 8.6% for midcareer workers. That’s based on a six-month rolling average.

The study says the rate was far worse for older workers who are black, female or lack college degrees.

NEW YORK — A new government report shows that since the coronavirus pandemic began, the U.S. has seen 300,000 more deaths than it usually would.

The Centers for Disease Control and Prevention has been tracking how many deaths have been reported and comparing them with counts seen in other years. Usually, between the beginning of February and the end of September, about 1.9 million deaths are reported. This year, it’s closer to 2.2 million – a 14.5% increase.

The CDC says the coronavirus was involved in about two-thirds of the excess deaths. CDC officials say it’s likely the virus was a factor in many other deaths too. For example, someone with heart attack symptoms may have hesitated to go to a hospital that was busy with coronavirus patients.

Deaths were up for different racial and ethnic groups, but the largest increase – 54% – was among Hispanic Americans.