Never before have NFL teams gone for 2-point conversions as often as they have this season, even if the decision sometimes has backfired.

The 58 attempts through six weeks are the most at this juncture of the season since the NFL adopted the 2-point conversion in 1994.

Going for 2 was a big part of the story line from this past weekend. 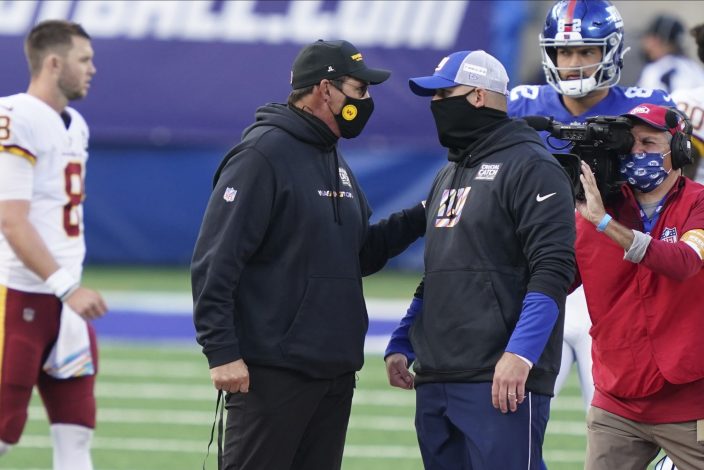 Houston interim coach Romeo Crennel made the unconventional move to go for 2 after scoring a touchdown to take a 36-29 lead over Tennessee on Sunday.

Deshaun Watson’s pass fell incomplete and the Titans drove for the tying score in the closing seconds, forcing overtime with an extra point rather than being forced to go for 2. Tennessee won the game with a touchdown on the opening drive of overtime.

Washington coach Ron Rivera also made the decision to go for 2 after scoring a TD with 43 seconds left, cutting the Giants lead to 20-19. Kyle Allen’s pass fell incomplete and Washington lost.

While those failures were noteworthy, teams have had decent success so far this season, converting half of the chances, slightly higher than the 47% conversion rate from the previous 20 seasons.

DEFENSIVE STAND: Defense stepped up across the league this past week with the 47.4 combined points scored per game the lowest of any week this season. The total is four points below the average from the first five weeks and a possible sign that defenses are finally starting to catch up to offenses after a record-setting scoring start to the season.

TD RECORDS: Tom Brady connected with Rob Gronkowski on a TD pass for the first time since the two teamed up in Tampa Bay. It was the 91st career TD between the duo, including the postseason. The only duos with more are Peyton Manning and Marvin Harrison with 114 and Steve Young and Jerry Rice with 92.

The TD was the 555th of Brady’s career in the regular season, one behind New Orleans’ Drew Brees for the most in NFL history.

UNDEFEATED SHOWDOWN: When Tennessee (5-0) hosts Pittsburgh (5-0) it will mark the sixth time in the Super Bowl era that two undefeated teams played in Week 7 or later. In the previous five showdowns, the winner went on to the Super Bowl with New England (2004) and Denver (2015) winning the title. The Patriots won two of those games in 2007 and Minnesota won in 1973 before losing the Super Bowl.

COMEBACK KIDS: The Colts were the latest team to overcome a big deficit, rallying from 21 points down to beat the Bengals 31-27 on Sunday. They were the first team since Kansas City in the 2016 opener vs. the Chargers to win a game they trailed by at least 21 points. In all, at least one team each week has rallied from at least 16 points down to win a game this season. There have been 19 games in which a team overcame a double-digit deficit to win, tied with 2011 for the most ever after six weeks.

Plenty of reasons for scoring's record-setting pace in NFL

Browns, Bills, Bears pile up wins despite being outscored

Seahawks, Packers off to high-scoring starts to season

Offensive numbers off the charts 3 weeks into NFL season

Kickers look out of sorts after no exhibition games

Winning division year after no playoffs commonplace in NFL