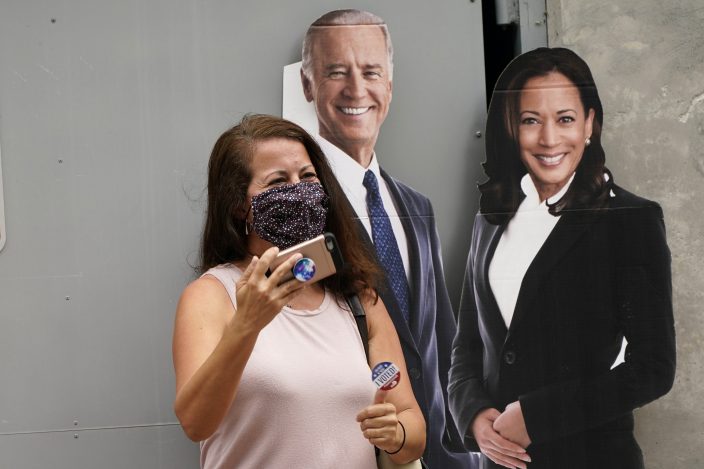 Yaidi Clery, left, holds up an "I Voted" sticker as she stands with a cutout of Democratic presidential candidate former Vice President Joe Biden, and candidate for Vice President Kamala Harris outside of an early voting site, Tuesday, Oct. 20, 2020, in Miami Beach, Fla. Florida begins in-person early voting in much of the state Monday. With its 29 electoral votes, Florida is crucial to both candidates in order to win the White House. (AP PhotoLynne Sladky)

DIFFERING PRIORITIES: President Donald Trump is hopping from one must-win stop on his electoral map to the next in the leadup to a final presidential debate that may be his last, best chance to alter the trajectory of the 2020 campaign. Joe Biden has been taking the opposite approach, holing up for debate prep in advance of Thursday’s faceoff in Nashville, Tennessee. Trump trails in polls in most battleground states. Working to reverse that, he stopped in Pennsylvania on Tuesday and is bound for North Carolina on Wednesday as he delivers his closing message.

BIDEN TRANSITION: Biden’s biggest challenge may begin the day after Election Day. If he wins, he’ll have just over 10 weeks to set up a new government. After making Trump’s handling of the pandemic a centerpiece of his campaign, Biden will have to show that his team can do better. He will also have to contend with what Democrats say is the damage the Trump administration has done to the bureaucratic machinery. And he’ll face pressure from liberals to deliver early policy wins. 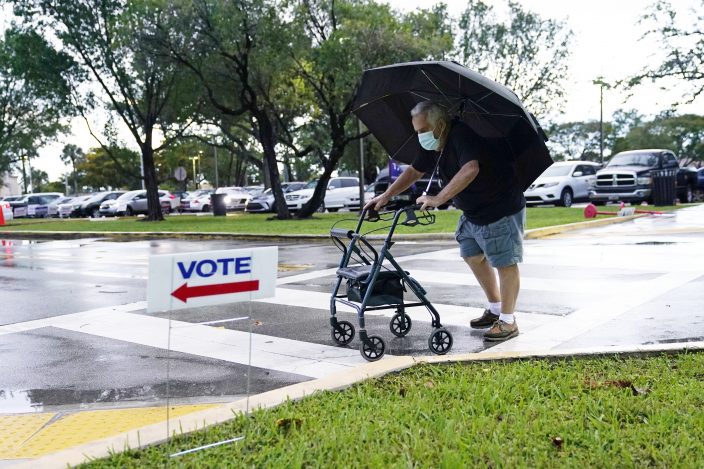 Franklin Castellon, 76, shields himself from the rain as he walks to an early voting site, Monday, Oct.19, 2020, in Miami. Florida begins in-person early voting Monday in much of the state as the Trump campaign tries to cut into an early advantage Democrats have posted in mail-in votes in the key swing state. (AP PhotoLynne Sladky)

ELECTION DISPUTE: The Supreme Court’s action in a Pennsylvania voting case has heightened fears among Democrats about Amy Coney Barrett joining the high court in time to decide a postelection dispute and with it, the winner of the White House. The justices split 4-4. Four conservative members of the court who would have granted the GOP’s request are likely to be joined soon by Barrett. That’s a potential majority in any election-related dispute, whether from Pennsylvania or any other battleground state where mailed-in ballots or a recount fight could decide the winner.

OPIOID CRISIS: The coronavirus outbreak and the Trump administration’s response to the pandemic have been a dominating theme in this year’s presidential race. That has overshadowed debate over how to handle the nation’s drug overdose crisis, which has contributed to the deaths of more than 470,000 Americans over the last two decades. The overdose death toll is only getting worse. It reached a new high of 71,000 in 2019, the vast majority related to opioids.

PRESSURE POINTS: Before the pandemic struck, the most serious global concern in 2020 was whether Washington and Tehran were on the cusp of a catastrophic war that would inflame the Middle East. The U.S. election stands to impact many thorny global dynamics — whoever wins.

FLORIDA WATCH: Pinellas County, home to St. Petersburg, is one to watch on election night. But unlike places such as Tampa and Orlando, which have steadily grown more liberal in recent years, Pinellas is harder to categorize. Residents voted for Barack Obama twice — and then Trump. It was one of only four counties in the state to switch from Obama to Trump. Pinellas will likely be a key because it’s a barometer for broader trends in the state and possibly the nation.

QUOTABLE: “One more vote, provided by a hard-right, Trump-nominated justice, could be the difference between voting rights and voting suppression.” — Senate Democratic leader Chuck Schumer of New York after the U.S. Supreme Court split 4-4 in a Pennsylvania ballot issue, allowing a lower court order to stand.