A Danish man convicted of murdering a Swedish journalist on his homemade submarine was remanded to custody Wednesday after he confessed to threatening several people as he attempted to break out of a suburban Copenhagen prison.

Prosecutors said Peter Madsen threatened a psychologist and a warden on his way out of the Herstedvester prison and allegedly pointed an object that looked like a gun at the driver of a van once he was outside the facility. He also told the police officers who handcuffed him when he was recaptured that he would detonate an explosives belt, which turned out to be fake, prosecutors said.

Madsen's attempt to escape from the prison on Tuesday was brief; he was recaptured after about five minutes. Prison personnel who followed him saw that he had jumped into a passing white van and informed police, who arrested one of Denmark's most notorious criminals around 500 meters (less than a half-mile) from the prison where he is serving a life sentence. 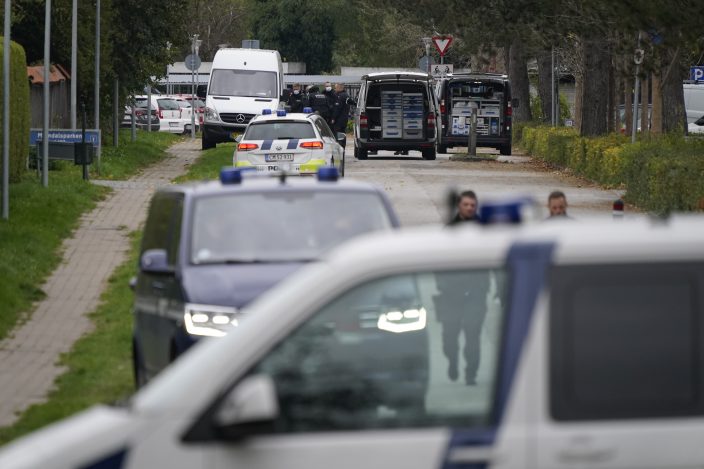 Police officers attend the scene after Peter Madsen was apprehended following a failed escape attempt in Albertslund, Denmark, Tuesday Oct. 20, 2020. The self-taught Danish engineer, who was convicted of torturing and murdering a Swedish journalist on his homemade submarine in 2017 before dismembering her body and dumping it at sea, on Tuesday was captured after attempted prison escape outside the suburban Copenhagen jail where he is serving life-time sentence. (Mads Claus RasmussenRitzau Scanpix via AP)

Madsen, 49, was convicted in 2018 for the murder of Kim Wall, a 30-year-old Swedish reporter he had lured aboard his homemade submarine in 2017 with the promise of an interview. He dismembered Wall's body and dumped it at sea. He now faces preliminary charges of attempted prison escape and making threats.

Preliminary charges are one step short of formal charges and allow police to hold Mardsen for two weeks while they investigate.

During a custody hearing at Glostrup City Court, Madsen answered “yes” when a judge asks if he confessed to the new charges. Prosecutors alleged that one or more other people helped Mardsen leave the prison, although defense lawyer Anders Larsen said Mardsen denies that anyone else was involved.

Police said after Mardsen was apprehended that he used an object that resembled a firearm and an imitation explosives belt when trying to escape.

Under Danish law, Madsen cannot get additional prison time for the escape attempt. But the terms of his incarceration can become stricter; for example, he could be cut off from contacts with other inmates and have his visits to a workshop and prison library reduced.

Madsen has denied murdering Wall, and claims she died accidentally inside the submarine, but Madsen has confessed to throwing her body parts into the Baltic Sea. He lost an appeal in 2018

Life sentences in Denmark usually mean 16 years in prison, but convicts are reassessed to determine whether they would pose a danger to society if released and can be kept longer.