This fall's presidential debates have chewed up moderators.

President Donald Trump steamrolled Chris Wallace with constant interruptions in the first one, a performance that cost the Republican incumbent support in the polls. Susan Page struggled to make the vice presidential candidates adhere to time limits their campaigns had agreed to in advance.

Next up: Kristen Welker. 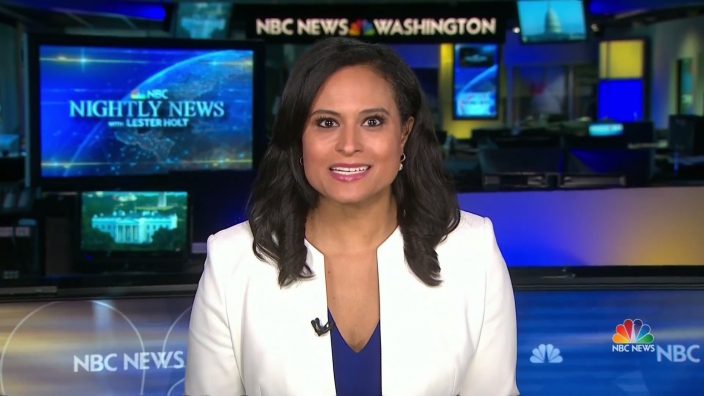 The NBC News White House correspondent is scheduled to moderate Thursday's second and last session between Trump and Democrat Joe Biden. It's hard not to feel trepidation for her.

Both of her predecessors came into the assignments with more experience. While Welker was one of four questioners at a Democratic presidential debate last fall, this is by far the 44-year-old journalist's biggest stage. Trump and his supporters have already tried to get in her head by attacking her in advance.

Colleague Savannah Guthrie's well-received (except by Trump) town hall with the president last week offered Welker a roadmap to success, but also may have ratcheted up the pressure.

The Philadelphia-born Welker has been with NBC News since 2010, after local news stints in Redding, California; Providence, Rhode Island; and her home city. A former intern at the “Today” show, she now hosts the program's weekend edition.

She's the first Black woman to moderate a presidential debate since Carole Simpson in 1992.

Earlier this month, Trump aide Jason Miller said on Fox News that he has “a very high opinion” of Welker and suggested she would do an excellent job as moderator. She’s “very fair in her approach,” Miller said.

Yet last weekend, the president tweeted that Welker has “always been terrible and unfair, just like most of the Fake News reporters.”

It wasn't clear why she'd earned Trump's disapproval. Trump has questioned why Welker had disabled her Twitter account after C-SPAN's Steve Scully claimed — falsely, he later admitted — that he had been hacked. Scully was to have moderated an earlier debate that was canceled.

NBC said the halt to Welker's Twitter account was temporary and done for security, not to hide anything she may have tweeted in the past.

Some of Trump's supporters also dug up evidence that Welker's parents had contributed to Democratic campaigns in the past as a way of questioning her objectivity. There have been no such accusations levied against Welker, a registered independent.

“She's got her eye on the prize,” said Mitchell, who has been helping Welker with debate prep and praises her hard work. Welker wasn't made available for an interview.

The best defense against such pregame criticism, Mitchell said, “is to know what she's talking about.”

Still, after having watched the earlier debates, Mitchell has no illusions about what her colleague is getting into.

“It's a hard challenge,” she said. “Chris (Wallace) and Susan (Page) are really experienced journalists. I've worked with both of them. It became impossible. I don't know if anyone could have handled that.”

Welker needs “to have the best night of her career,” Washington Post media critic Margaret Sullivan wrote this week. She needs to establish control in a way that Wallace and Page never did. Welker will have one potential assist: The debate commission said Monday that microphones for the two candidates will be turned off while their opponent gives a two-minute answer to an initial question.

While Welker can't fact-check everything that is said in the debate, Sullivan said the NBC correspondent “can and must keep the debate from becoming a super-spreader of disinformation.”

Oppenheim, who was in Nashville, Tennessee, this week to help with Welker's prep session and mock debates, said he believed no one is better suited to the task.

“She is focused on delivering for the American people a substantive conversation about the issues that voters care about and she's going to do everything in her power to make that happen,” he said.