It would have been just another Saturday night until Faridd Sierra got a phone call from his brother: come over. A fellow Honduran American is fighting for a unified boxing lightweight championship.

The 39-year-old from Dallas hadn’t heard of Brooklyn-born boxer Teófimo López until that phone call.

But by the 12th round of the fight between López and Ukrainian Vasiliy Lomachenko, Sierra and his brother were on their feet, cheering on the 23-year-old fighter to make history. He did. 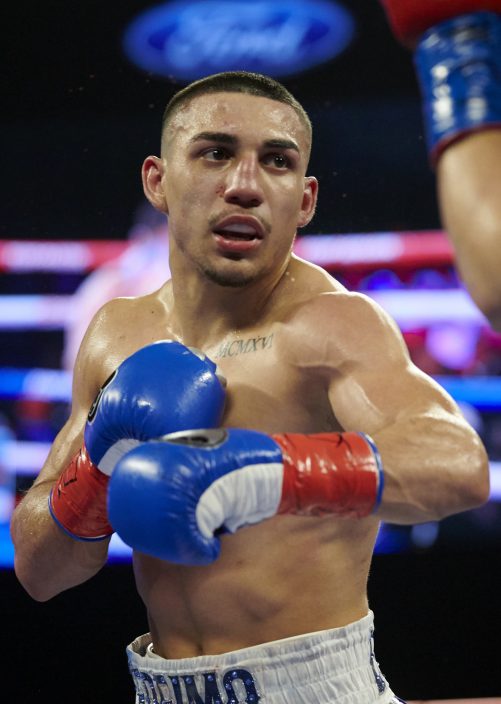 FILE - In this Feb. 2, 2019, file photo, Teofimo Lopez is shown during his lightweight boxing match against Diego Magdaleno, in Frisco, Texas. Brooklyn-born Teofimo Lopez stunned Vasiliy Lomachenko on Saturday, Oct. 17, 2020, to win a unanimous 12-round decision and unify the lightweight titles to join a rare group of boxers of Central American descent to capture a world championship. (AP PhotoCooper Neill, File)

Across the U.S. and Central America, Hondurans and Honduran Americans took to social media to express pride, excitement, and emotion over the improbable victory by López over the best boxing technician in the world.

The son of Honduran immigrants walked into the ring to a Biggie Smalls hip hop sample with swagger and walked out with multiple championship belts. Lopez (16-0) added the three titles held by Lomachenko (15-2) to the belt he won last year to become the undisputed 135-champion following a unanimous 12-round decision.

FILE - In this Dec. 14, 2019, file photo, Teofimo Lopez flips in the ring after defeating Ghana's Richard Commey by TKO during the second round of an IBF lightweight boxing match, in New York. Brooklyn-born Teofimo Lopez stunned Vasiliy Lomachenko on Saturday, Oct. 17, 2020, to win a unanimous 12-round decision and unify the lightweight titles to join a rare group of boxers of Central American descent to capture a world championship.(AP PhotoMichael Owens, File)

The victory came for Honduran Americans after years of watching Honduran and Central American migrants fleeing violence only to end up in detention centers in the U.S. and Mexico. Images of migrant children in cages and hearing stories about migrant children being separated from family have only added to the anxieties and fears, according to Patricia Montes, a Honduran immigrant activist living in Boston.

“It feels sometimes people don’t even see us as human,” Montes said. “But now we have a champion and it tells us we can do anything.”

Ceasar Avelar, a dairy factory worker who lives in Pomona, California, and whose mother is Honduran and father is from El Salvador, immediately texted relatives as soon as López won. “The dude looks like my brother,” the 37-year-old Avelar said. “This is a jolt. It’s kind of like looking in the mirror, and for the first time, seeing ourselves for real.”

Avelar, an aspiring poet who is working with writer Matt Sedillo, said López inspired him to keep reaching for his dream. “This is a new beginning, man,” he said.

Rudy Mondragón, a UCLA Chicana and Chicano Studies doctoral candidate who is studying boxing, said the sport has long served as a gateway for immigrants and marginalized communities in the U.S.

“Like Johnny Tapia (the former bantamweight champion from Albuquerque, New Mexico), Teófimo López is a disrupter,” Mondragón said. “Except he’s breaking all the stereotypes about what Central American athletes, especially those from Honduras, can do. He’s changing the status quo.”

Even the López social media hashtag, #TheTakeaway, is a source of Central American pride in the U.S. since it sends a message that there is a new population coming to fight for what they want, Mondragón said.

Only a handful of Central American athletes have generated such excitement as López in recent years. San Francisco Giants shortstop Mauricio Dubón, who was born in Honduras, has a following and frequently pays homage to the land of his birth. Former boxing champion Roberto Durán of Panama generated fans during a career that spanned into five decades. And Salvadoran American boxer Carlos “El Famoso” Hernández won the IBF World Super Feather Title in 2003, making his own history.

After the fight, López’s father said they intended to build boxing gyms in Honduras.

Sierra, who works at the substance abuse prevention nonprofit Youth180, said he intends to share the López story with his students and believes it will also inspire them. “This didn’t hit me until I saw celebrities like Magic Johnson and Manny Pacquiao tweeting congratulations,” Sierra said. “This is just the beginning.”

Associated Press Writer Russell Contreras is a member of the AP’s Race and Ethnicity team. Follow Contreras on Twitter at https://twitter.com/russcontreras