Tyronn Lue is stepping into his new job as coach of the Los Angeles Clippers fully aware of the pressure to bring the first NBA championship to the long-suffering franchise. As if Lue needed a reminder, owner Steve Ballmer proclaimed, “My personality is all about winning.”

It's been nearly two years since Lue worked as a head coach. He was fired in Cleveland after an 0-6 start to the 2018-19 season and used the down time to work on himself before joining Doc Rivers' staff in Los Angeles this past season.

“I lost 35 pounds, changed my diet. That was the main thing, focus on myself," Lue said Wednesday via Zoom. "After Cleveland, I had the whole season to reflect on what I could have done better.” 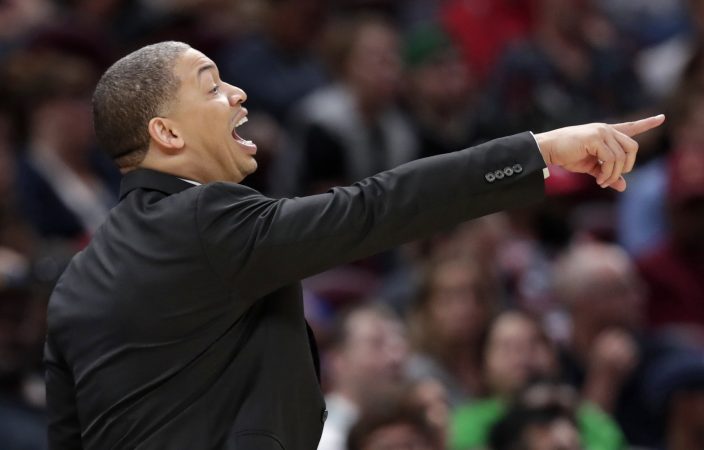 FILE - In this Oct. 6, 2018, file photo, Cleveland Cavaliers head coach Tyronn Lue yells instructions to players in the second half of an NBA preseason basketball game against the Boston Celtics, in Cleveland. Tyronn Lue has agreed in principle to become the next coach of the Los Angeles Clippers. Final terms were still being worked on, according to the person who spoke to The Associated Press on condition of anonymity Thursday, Oct. 15, 2020, because no contract had been signed. (AP PhotoTony Dejak, File)

Now it’s Lue’s turn to try to take the Clippers where the franchise has never been before — beyond the second round of the playoffs.

“I’m big on pressure,” he said. “If you don’t have pressure that means you don’t have a chance to win a championship. I want to be one of the greatest coaches.”

Ballmer said, “Ty is my kind of guy. He wants to move, move, move, learn, absorb, think new thoughts, which I think is essential to keep pushing yourself.” FILE - In this Oct. 19, 2018, file photo, Cleveland Cavaliers head coach Tyrone Lue directs his players against the Minnesota Timberwolves in the first half of an NBA basketball game, in Minneapolis. Tyronn Lue has agreed in principle to become the next coach of the Los Angeles Clippers. Final terms were still being worked on, according to the person who spoke to The Associated Press on condition of anonymity Thursday, Oct. 15, 2020, because no contract had been signed. (AP PhotoJim Mone, File)

Lue, 43, already has three NBA championships on his resume — two as a player with the rival Lakers and one as coach of Cleveland when LeBron James played for the Cavaliers. He also led the Cavs to the Finals in 2017 and '18, but both times they lost to Golden State. Lue went 128-83 in parts of four seasons with them.

The Clippers — in the first season of Kawhi Leonard and Paul George playing together — went 49-23 this regular season, the fourth-best record in franchise history. Leonard and George can both opt out and become free agents after next season.

It'll be up to Lue to balance the personalities of his two Leonard and George, who by nature are quiet and reserved. He's dealt with superstars before, having coached James and been a teammate of the late Kobe Bryant.

“Our two players, they lead by example. Practicing hard and working hard every day individually on their game,” Lue said. “You're not going to have the best players be your leaders all the time. It's going to be collective.”

Lue believes keeping everyone healthy is the key for next season, whenever it starts. Leonard was on a load management program last season because of a left knee injury and only played in 57 games. George missed all of training camp and the first several games while recovering from offseason shoulder surgery.

Lue said he wasn't sure about Leonard's load management for next season without first talking to the team's medical staff.

Rivers established a winning tradition, taking the Clippers to the playoffs in six of his seven seasons, by far the most successful stretch in franchise history. Playing in the NBA bubble in Florida, the Clippers wasted a 3-1 lead over Denver and lost in the Western Conference semifinals in mid-September.

“I definitely gave it time. It’s very important to me that we don’t do anything in the heat of the moment,” Ballmer said. “Doc and I needed to have some chats. After a few chats, we decided collectively that it was probably right to move in a different direction.”

Rivers wasn't out of a job for long, getting hired the same week to coach the Philadelphia 76ers.

Ballmer was quick to address Rivers' departure, bringing it up even before mentioning Lue.

“I really want to thank Doc Rivers. Doc was obviously a fantastic championship coach,” Ballmer said, apparently referring to the 2008 NBA title Rivers won as coach of the Boston Celtics.

“He’s been a mentor since I first purchased the Clippers six years ago. I’m so grateful to Doc. Doc is a very special human being. He’s been a great ambassador and a great person. I wish him well in Philadelphia, except for the two days a year when we play him.”

Lue experienced a loss when Rivers was sent packing.

“It's been tough,” he said. “Doc has been my mentor since I’ve been in the league. Without Doc, I wouldn’t be in this position today.”

Lue was a candidate for other head coaching jobs this offseason. Ballmer cited Lue's accountability and his ability to connect with the players as factors that make “the best of the best is Ty Lue.”