The Latest on Game 2 of the World Series (all times local):

The Los Angeles Dodgers have certainly settled into the new ballpark deep in the heart of Texas.

Game 2 of the World Series will be the Dodgers’ 15th game at the $1.2 billion Globe Life Field. That is already half as many as the 30 games the Texas Rangers have played in their new home, which opened during the pandemic-shortened season. 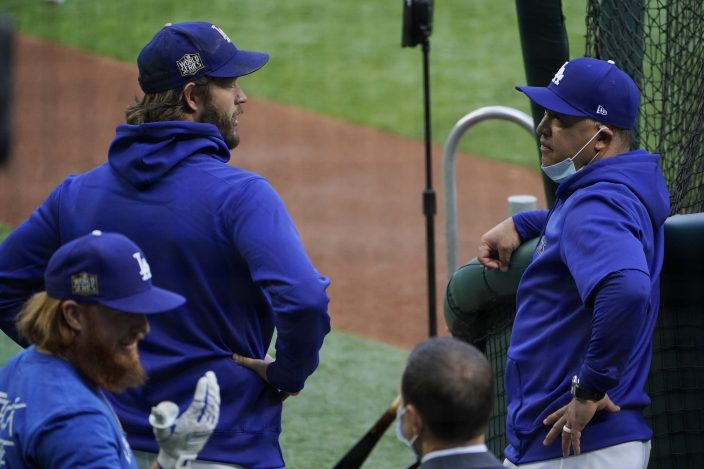 Dodgers manager Dave Roberts said before Wednesday night’s game that all the experience there has made it feel more like a home field and is definitely an advantage.

Los Angeles, which had the best record in the majors during the regular season, has been in the home clubhouse and home dugout for more than two weeks. That run began with a three-game sweep of San Diego in the National League Division Series, then a seven-game National League Championship Series win over Atlanta before facing Tampa Bay in the World Series

The Dodgers were on the other side for a three-game series during the regular season in late August against the Rangers.

Austin Meadows is leading off as the designated hitter for Tampa Bay and first baseman Ji-Man Choi is in the cleanup spot for the Rays in Game 2 of the World Series against the Los Angeles Dodgers.

With rookie right-hander Tony Gonsolin on the mound for the Dodgers on Wednesday night, the left-handed hitters Meadows and Choi were in the lineup after not starting the series opener against lefty Clayton Kershaw. The Rays had five left-handers in the batting order.

Kiké Hernández, who entered Tuesday’s 8-3 Dodgers win as a pinch-hitter after Glasnow was out of the game, is getting the Game 2 start at second base. Chris Taylor moves to left field, with AJ Pollock the DH and Will Smith the catcher after being the DH in Game 1.

Romania activist urges people to do something good ever ...

A gentle hero to many in Romania, ...