The Carolina Panthers 27-year-old wide receiver has been one of the biggest free-agent success stories in the NFL this season, currently second in the league in yards receiving (566) and tied for fourth in receptions (40).

Anderson came to Carolina after four seasons with the Jets, where he averaged 52 receptions and 765 yards and earned a reputation as the tall, skinny wide receiver who could blow the top off the defense at 14.7 yards per catch. 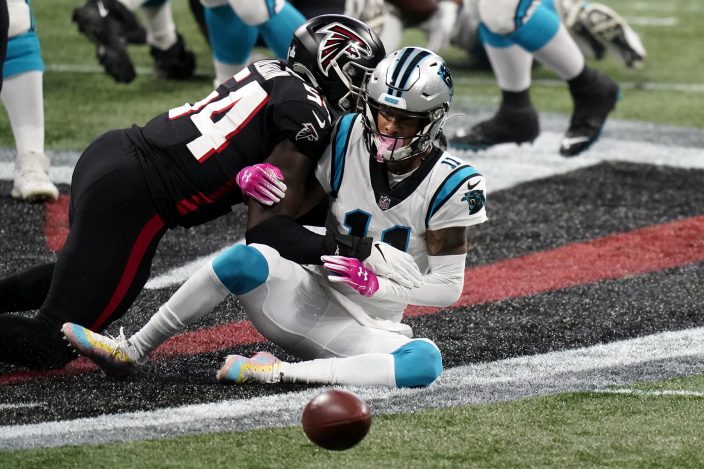 Now he’s showing he can be a reliable possession receiver, too, on pace for a career-high 106 catches for 1,509 yards entering Sunday’s game at New Orleans.

Panthers coach Matt Rhule, who coached Anderson at Temple, said he never bought into the notion that Anderson was just a straight-line receiver whose sole strength was his ability to run past defensive backs. 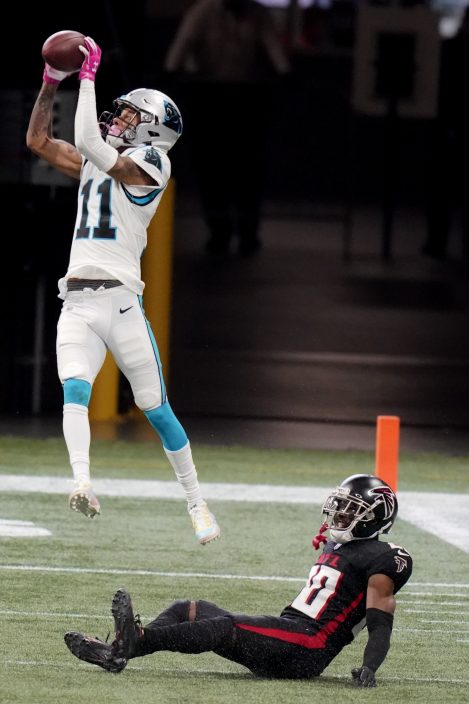 Carolina Panthers wide receiver Robby Anderson (11) makes the catch over Atlanta Falcons defensive back Kendall Sheffield (20) during the first half of an NFL football game, Sunday, Oct. 11, 2020, in Atlanta. Sheffield was injured on the play. (AP PhotoBrynn Anderson)

That's why Rhule pushed for Panthers general manager Marty Hurney to sign Anderson when he became an unrestricted free agent. The Jets thought they were going to be able to retain Anderson, but instead he signed a two-year, $20 million contract with Carolina — one that is beginning to look like a bargain deal — to rejoin Rhule.

Rhule said Anderson has been “fearless” in Carolina's offense, able to work underneath the coverage and make catches in traffic. 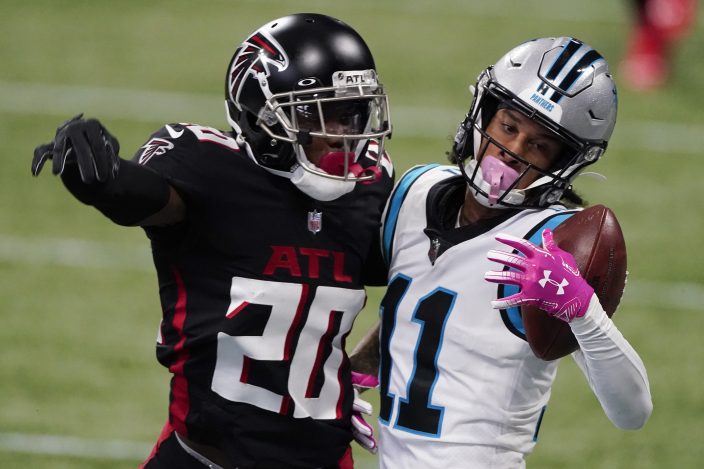 Anderson showed that last Sunday when he laid out to haul in a 38-yard reception from Teddy Bridgewater along the left sideline.

Anderson doesn't mind being called a deep threat — he has a 75-yard TD reception this season — but believes he's so much more.

“I've just have been able to show that I’m an all-around receiver, which I already kind of knew about myself,” Anderson said. 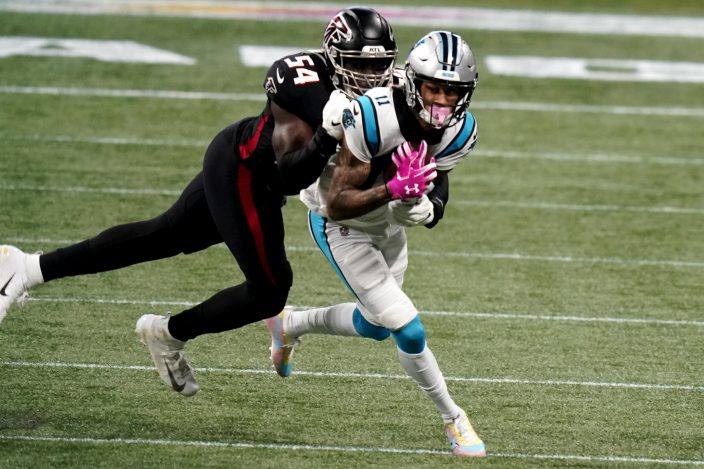 He credits playing in offensive coordinator Joe Brady's system as part of the reason he's putting up gaudy numbers. His chemistry with Bridgewater, whom he worked with extensively after they signed with the Panthers on consecutive days, has made a “huge impact,” too.

“Him having that trust in me and him understanding and wanting to take time to teach me has helped my game a lot," Anderson said.

While D.J. Moore has been steadily referred to as Carolina's No. 1 receiver, it's been Anderson who has been Bridgewater's most reliable target, catching 40 of 51 balls throw his way.

But Moore has played well at times, too, as has Curtis Samuel, who missed last week's game with a knee injury.

“It’s one of the better receiving corps that we’ve seen with the addition of Anderson coming in,” Saints coach Sean Payton said. "You can see the confidence that those guys are playing with and you do recognize a lot of your schemes, a lot of different formations and they’re not just ours. They’re kind of league wide, but the way they’re presented.”

Bridgewater put it back on Anderson, saying that labels aren’t always accurate.

“It was always in him,” Bridgewater said. “Maybe it was the system that he was in. You know how this league works. When you’re labeled one way, that travels with you.”

NOTES: Rhule said Christian McCaffrey will miss his fifth straight game on Sunday while recovering from a high ankle sprain. The injury was expected to keep the 2019 All-Pro running back out four to six weeks. ... The Panthers are auditioning kickers Casey Bednarski, Austin Parker and Taylor Bertolet this week in case Joey Slye is unavailable. Slye was placed on the COVID-19/reserve list on Wednesday along with offensive lineman Trent Scott. Rhule said he should know more by Friday if Slye will be cleared to play. ... Rhule said wide receiver Keith Kirkwood is done for the season after re-breaking his clavicle on Sunday against the Bears, but he's hoping to get safety Juston Burris (ribs) back at some point this year.

For most of his life, Venezuelan P ...