A man accused of fatally shooting a Houston police officer during a domestic disturbance call is facing both state and federal charges and could face the death penalty, authorities announced on Wednesday.

Houston Police Chief Art Acevedo said Manzano, who is from El Salvador, was in the country illegally. 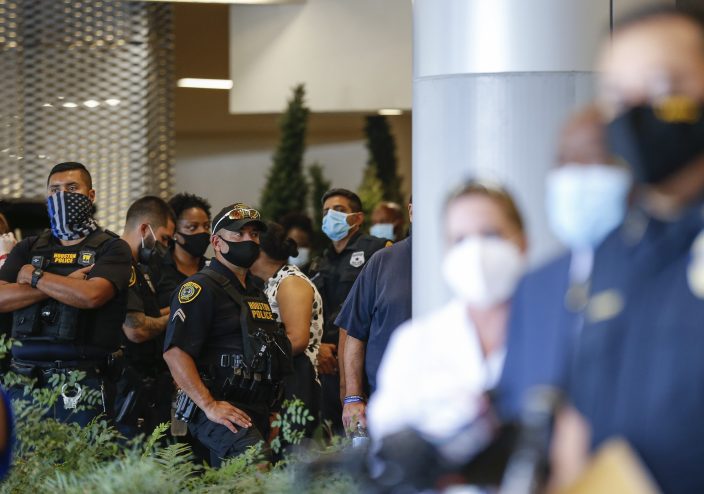 Houston Police officers watch as chief Art Acevedo talks to reporters about the death of Sgt. Harold Preston, at Memorial Hermann Hospital on Tuesday, Oct. 20, 2020, in Houston. Two officers were shot by a suspect during a domestic violence call at an apartment complex. (Godofredo A. VásquezHouston Chronicle via AP)

“This is a very evil person,” Acevedo said of Manzano. 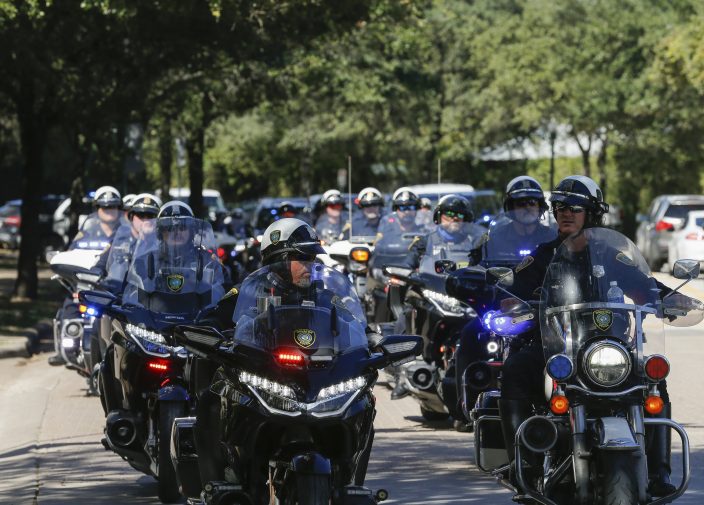 Houston Police officers escort the body of Sgt. Harold Preston from Memorial Hermann Hospital to the medical examiner's office, Tuesday, Oct. 20, 2020, in Houston. Two officers were shot by a suspect during a domestic violence call at an apartment complex Tuesday. The other officer Courtney Waller was shot in the arm and is in stable condition at a hospital. ( Godofredo A. VásquezHouston Chronicle via AP)

Court records did not list an attorney for Manzano.

Prosecutors have filed a motion asking that Manzano be held without bond once he is released from the hospital. The district attorney’s office has said it will probably seek the death penalty against Manzano, but no final decision has been made yet.

The shooting happened Tuesday morning when officers were called to an apartment in southwest Houston after Manzano’s wife had reached out to police on a domestic disturbance call. She was moving out of her apartment but Manzano would not let her in, police said.

The teenage son and police went to the apartment and when he opened the door, Manzano came out and began shooting at officers, according to police.

Acevedo said Wednesday that Preston, who was shot multiple times, was able to return fire and hit Manzano in the abdomen. Manzano barricaded himself in the apartment but later surrendered to authorities.

Preston, who had been with Houston police for 41 years, was about two weeks away from retiring, Acevedo said. Waller has been with the police department for three years.

Before Tuesday’s shooting, Manzano’s wife had filed a family disturbance report with police on Saturday and officers had responded to a domestic disturbance call at the apartment on Sunday.

Acevedo said that as part of his agency’s investigation, it will review whether charges could have been filed against Manzano prior to Tuesday’s shooting.

“Based on what I’ve seen so far in our review we did our best to deal with what we knew at the time and so did the DA’s office,” Acevedo added. “We didn’t have enough for them to accept charges.”

Police will also review whether letting Manzano’s son open the door to the apartment was the best approach by officers at the scene, he said.

“But right now, let’s just be real clear. There’s only one person responsible for the death of a police officer ... and that person ... is Manzano, solely Manzano,” Acevedo noted.

The shooting came amid an uptick in domestic violence in Houston and other cities as the coronavirus pandemic has forced people to spend more time in their homes.

Acevedo said Manzano prevented his wife from leaving him by threatening to reveal to authorities that she was in the U.S. illegally.

“I want her to know and all victims of domestic violence to know, that this department is here for you,” Acevedo said. “It doesn’t matter if you are rich or poor, if you’re Black or white ... and it doesn’t matter whether you are documented or undocumented.”

Most of the college football world ...