Democratic U.S. Rep. Kendra Horn, a lawyer from Oklahoma City, accomplished the most stunning political upset in the nation two years ago when she ousted a two-term GOP incumbent and captured a seat that had been held by Republicans for four decades.

But in this year's election cycle, Horn, 44, won't have the element of surprise she had in 2018, and both state and national Republican groups have launched a massive counter-attack to win back the seat that virtually every political prognosticator has listed as a toss-up.

Although Oklahoma has a reputation as a deep-red state, with Republicans controlling every statewide elected office and enjoying super majorities in both chambers of the Legislature, the 5th Congressional District includes the state's capital of Oklahoma City, which has become younger and more diverse over the last decade. 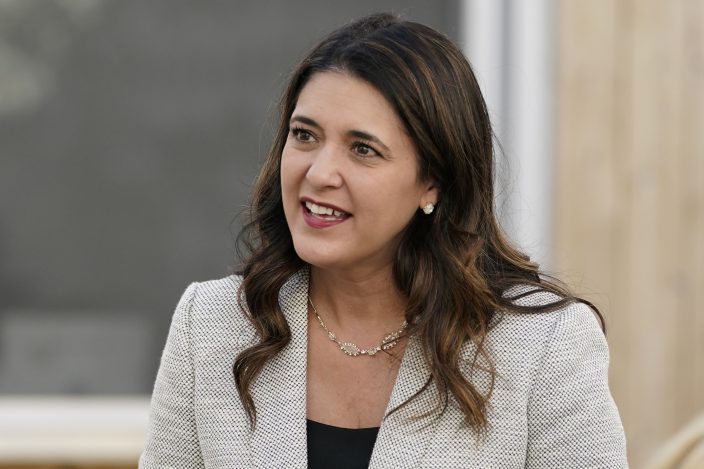 FILE - In this Wednesday, Sept. 30, 2020, file photo, Oklahoma state Sen. Stephanie Bice, Republican candidate for the U.S. House, talks with people at a meet-and-greet event in Oklahoma City. U.S. Rep. Kendra Horn pulled off one of the biggest political upsets in 2018 when she ousted a two-term Republican incumbent. But Horn won't have the element of surprise in this year's contest against Bice. (AP PhotoSue Ogrocki, File)

“This is not some right-wing paradise in Oklahoma City," said Mayor David Holt, who has avoided endorsing either candidate. “Oklahoma City does not have the same profile as the state of Oklahoma, and Congresswoman Horn's election was probably the strongest statement yet that the city was changing and behaving, really, more like a big city."

The race is among a number in the Southwest this year that show a conservative political tradition colliding with the increasing leftward drift of large and medium-sized cities.

In 2018, the Republican candidate for governor, Kevin Stitt, won his race handily in the statewide ballot but lost the city's vote by 13 percentage points to his Democratic opponent. In this year's primary, a gay, Black, Muslim woman won a legislative seat in the county, which is 3.5 years younger than the national average age.

Horn's district includes several traditionally conservative suburbs where the politics appear to be shifting. In well-to-do Edmond, a group of Democratic women created after President Donald Trump's 2016 victory has swelled to more than 500 members and become the largest Democratic group in Oklahoma after the state party.

“I've heard people say to me they've never heard the words Edmond and Democrat in the same sentence," said the group's president, Gwen Shaw. “Before the 2016 election, you just felt underground, like you were the only Democrat in the area."

Now the group's members are getting involved in precinct-level politics, holding fundraisers and knocking doors for Democratic candidates up and down the ballot.

Horn’s opponent this year is Republican state Sen. Stephanie Bice, who won the nomination in an August runoff against an opponent who strongly aligned herself with Trump, who won the district in 2016 by nearly 14 points.

Bice, 46, has earned a reputation as a political moderate in her two terms in the state Senate, writing a series of bills to help overhaul the state's antiquated alcohol laws and inviting a Hindu leader to deliver a prayer after the Legislature faced criticism for its lack of religious diversity.

“I feel like I’m the type of person that just gets things done, and I find reasonable, conservative solutions to do that, and I think Oklahomans respond to that," Bice said during a recent fundraiser in Oklahoma City. “That’s really what I want to do in Washington is try to take that same approach there: negotiate, compromise, but get things done for Oklahoma."

Bice's willingness to update the state's patchwork of alcohol laws, some of which were enshrined in the state Constitution, including limiting the sale of cold beer to alcohol content below 3.2%, appeals to voters like 34-year-old Edmond banker Cory Christofferson.

“That's evidence of getting the job done and creating local jobs, which is what the country needs," Christofferson said.

Listening to Horn on the campaign trail or in her television ads, it's hard to discern which party she belongs to. One ad features a Republican mayor in the small town of Jones praising her for helping secure funding for a bridge. Another ad includes a lifelong Republican business owner who says she plans to vote for Horn.

And while attack ads against Horn relentlessly link her to House Speaker Nancy Pelosi, a liberal boogeyman to conservative Oklahomans, Horn stresses her membership in the Problem Solvers Caucus, a group of 25 House Republicans and 25 Democrats who seek bipartisan consensus on issues before Congress.

“I have called out both Senate and House leadership, both sides of the aisle, and worked with the bipartisan Problem Solvers Caucus," Horn said during a recent debate with Bice. “I have stood up and will continue to stand up to the speaker and to anyone when they do something that is not in the best interest of Oklahomans."

That message of bipartisanship resonates with voters like Roland Herwig, 77, a retired federal employee from Edmond who said he plans to vote for Horn in November.

While Horn has outraised Bice, amassing more than $5.1 million to Bice's $2.7 million, according to the latest Federal Election Commission reports, even more money is flowing in from outside groups. More than a dozen national groups have poured nearly $10 million into the race, about evenly divided between both sides, according to the Washington, D.C.-based Center for Responsive Politics.

Holt, who was a Republican state senator being elected Oklahoma City's mayor in 2018, said either the Democratic or Republican candidate would fit the city well.

“Both women are hard-working, well-intentioned, good listeners," he said, adding, “These are both good public servants, despite what the TV ads will try to tell you."