Game 1 of the World Series was all about Mookie Betts and his quest to give the Los Angeles Dodgers a title and fans across the country a free taco.

Game 2 gave us a $27.50 hot dog that could feed the family, and a reminder that the Tampa Bay Rays may be even better than the sum of their bargain basement parts.

Now Major League Baseball can only hope that fans are hungrier for more. 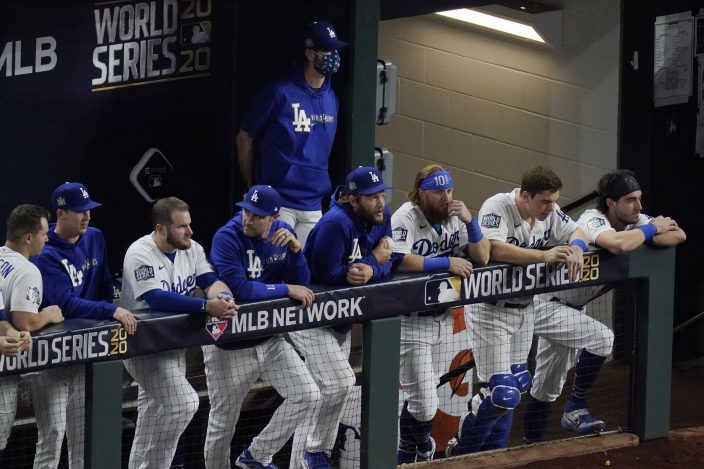 Members of the Los Angeles Dodgers watch during the ninth inning in Game 2 of the baseball World Series against the Tampa Bay Rays Wednesday, Oct. 21, 2020, in Arlington, Texas. (AP PhotoSue Ogrocki)

A World Series unlike any other is knotted 1-1 after the Rays jumped on a parade of early Dodger pitchers on their way to a 5-0 lead Wednesday night that they never relinquished. They did it behind two opposite field home runs from Brandon Lowe, who had been mired in a deep postseason slump, and a succession of pitchers who held the Dodgers to just five hits — though three of them left the park at spacious Globe Life Field in Texas.

Betts wasn’t a factor, but the Dodgers' makeshift pitching rotation was. A day after ace Clayton Kershaw pitched six strong innings, Tony Gonsolin got only four outs and the six pitchers who followed him weren’t terribly effective either.

The end result was a 6-4 Tampa Bay win that not only evened up the series but gave the underdog Rays a jolt of confidence just when they needed it the most. 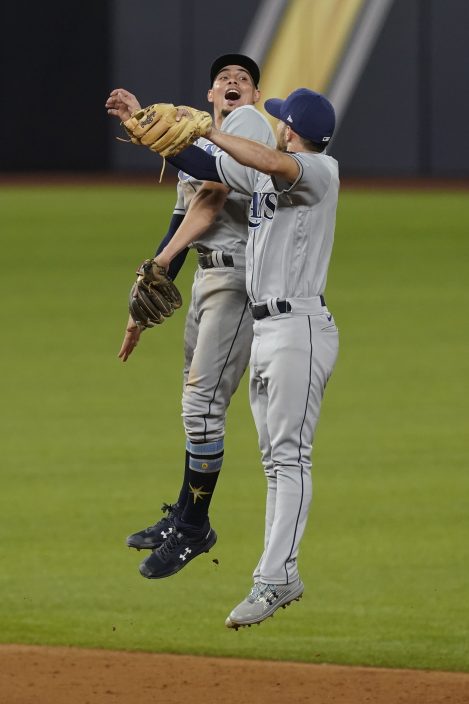 “We’re good and we’re here to play," pitcher Blake Snell said. ”It’s not going to be an easy World Series. We’ve got chemistry and we can play really good together. They’re going to have to bring it every night just like we will.’’

Just when Dodger fans were beginning to believe this could be the year the team’s 32-year World Series victory drought could finally be over, Snell didn’t allow a hit in the first four innings to stake his team to the lead. He didn’t make it through the fifth but struck out nine of the 15 Dodgers who went down swinging on the night.

Meanwhile, the Dodgers were going through so many pitchers early that Kershaw had to alert FOX announcer Joe Buck to the latest one as he was being interviewed in the dugout in the second inning.

If the game wasn’t a must win for Tampa Bay, it was pretty close. The Dodgers have manhandled opposing teams all year, and the idea of giving them a 2-0 lead in a best-of-7 series had to make even manager Kevin Cash nervous.

But Lowe — who entered the game hitting .107 with one home run in the postseason — set the tone with a home run in the first inning and suddenly the Rays seemed to regain the swagger that was nowhere to be seen the night before.

“Tonight was a huge game for him and for our team as well,’’ Joey Wendle said. “Today was a little bit of a better indicator what kind of team we are.”

What the Rays are is a small budget team that plays big even when they struggle offensively as they did against the Houston Astros. They’ve got interchangeable pitching parts that Cash is a master of moving around and they’ve got defense for the games they need it.

They weren’t exactly embarrassed in Game 1, but they weren’t the Rays we’ve seen all season. That seemed to change with Lowe’s first inning home run when, suddenly, they seemed to believe they belonged with a team in its third World Series in four years.

“I think it’s just the guys we got in the locker room, how close everyone is,” Lowe said. “Everyone in that locker room will die for the guy beside him. They’re going to go out there and give everything they have no matter what it is. They came out, they beat us yesterday, but we understood that you can’t change what happened. We got to show up, and we got to take care of business today.”

A competitive series is always welcome, of course, but maybe even more in the strangest year in modern baseball. The playoffs have been entertaining enough but they haven’t generated a lot of buzz and Game 1 was the lowest-rated World Series opener ever.

Maybe that was why Buck and the FOX crew were so fixated on tacos given away for a stolen base in Game 1 and the huge Boomstick chili dog that got airtime Wednesday night. Between that and a fan making a catch of a home run and then throwing his glove on the field there was a lot to look at in between Dodger strikeouts.

Dodgers manager Dave Roberts, meanwhile, was already looking ahead to the rest of the series when, unlike Wednesday night, he'll be able to open with starters on normal rest.

“We feel great. We’ve got Walker (Buehler) going. We’ve got Julio (Urias) going and then we’ve got Clayton," Roberts said. "We're in a great spot.''

Tim Dahlberg is a national sports columnist for The Associated Press. Write to him at tdahlberg@ap.ort or https://twitter.com/timdahlberg

High court to decide whether Nazi art case stays in US ...

Jed Leiber was an adult before he ...