On a circuit hosting its first Formula One race, Lewis Hamilton can finally stand alone among F1 greats by beating Michael Schumacher's record for wins.

Victory at the Portuguese Grand Prix on Sunday would move the British driver onto 92 race wins, and surpass the German great's mark of 91 that for so long had been considered untouchable.

“I remember sitting at home watching the Grand Prixs and watching Michael win," Hamilton said. "I remember going upstairs with my brother afterwards and we would play computer games together and I would be Michael. So it's very, very surreal." 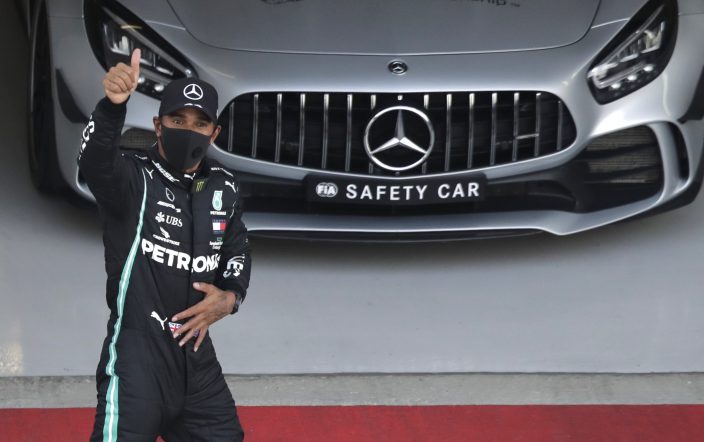 FILE - In this file photo dated Saturday, Sept. 26, 2020, Mercedes driver Lewis Hamilton of Britain gives the thumbs up after clocking the fastest time during qualifying for the Russian Formula One Grand Prix, at the Sochi Autodrom circuit, in Sochi, Russia. Victory at the Portuguese Grand Prix on upcoming Sunday Oct. 25, 2020, would move the British driver onto 92 wins, and surpass the German great Michael Schumacher's mark of 91 that for so long within F1 had been considered untouchable. (AP PhotoPavel Golovkin, FILE)

A win would also take Hamilton a step closer to matching Schumacher's record of seven F1 championship titles. He leads the championship by 69 points ahead of his Mercedes teammate Valtteri Bottas after winning seven of the first 11 races, and with only five remaining after Sunday's contest at the Autodromo Internacional do Algarve.

When Hamilton moved level with Schumacher on 91 wins at the Eifel GP in Germany two weeks ago, Schumacher's son Mick Schumacher — who leads the F2 championship — presented a visibly moved Hamilton with one of his father's racing helmets from his time at Mercedes.

“I was really honored by Michael’s family when they presented me with this helmet,” Hamilton said. 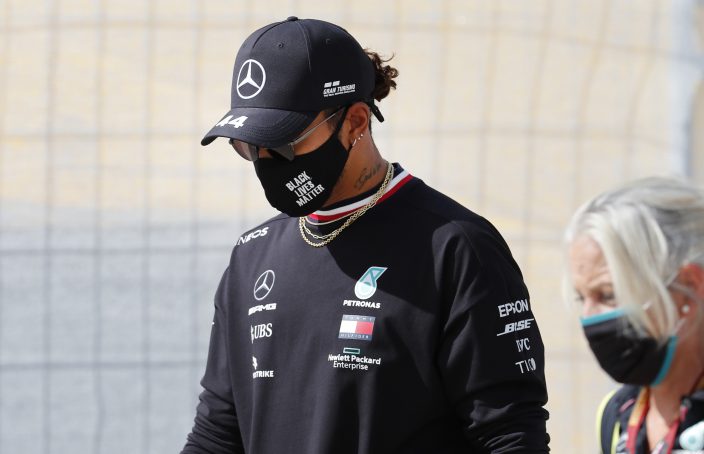 It was Schumacher's retirement from Mercedes — and F1 itself — which opened the door for Hamilton to make what was then considered a risky move when he left McLaren to join the Silver Arrows.

Bottas led the Eifel GP after taking pole position, but then ceded first place to Hamilton after a clumsy braking error. A despondent Bottas had to retire the car after 12 laps due to a failed electrical component in the engine.

“Seeing Lewis cross the line in Germany and take his 91st victory was a very special moment. Valtteri’s race, however, could not have gone much worse,” Mercedes' head of motorsport Toto Wolff said. “But one of Valtteri’s biggest strengths is his resilience and his ability to bounce back.” 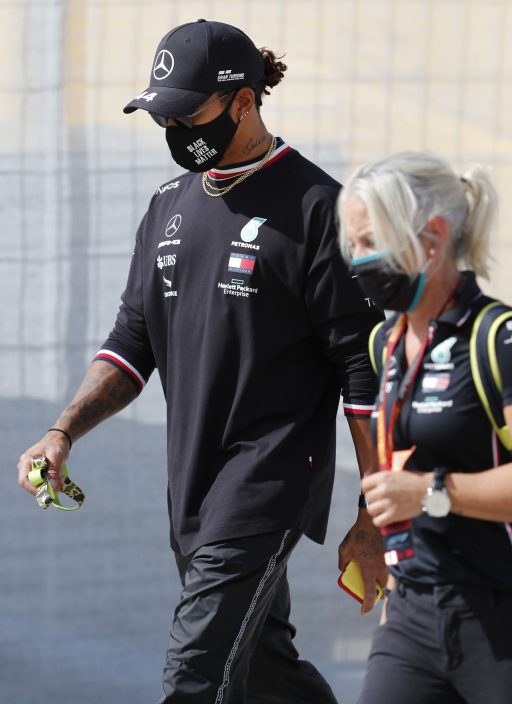 Still even a win in Portugal would do little for Bottas' chances of catching Hamilton, unless his teammate endures some bad fortune of his own in the handful of races remaining.

Portugal's 4.65-kilometer (2.9-mile) circuit — known as Portimao — is an undulating one with frequent elevation changes and where overtaking is expected to be difficult. It is the second new race of a coronavirus-hit campaign after the Tuscan GP at Mugello last month.

If Sunday's race is anything as intense as that crash-marred one at Mugello, then F1 fans will be in for a treat.

For Haas drivers Romain Grosjean and Kevin Magnussen it represents a chance to put themselves in the market for a seat next season. The U.S.-owned team with Ferrari engines announced on Thursday that the duo will be replaced next year, having scored only three points between them so far.

“The last chapter is closed and the book is finished,” said Grosjean, the veteran French driver.

For Hamilton, the story continues.

Bottas fastest in 1st practice for the Portuguese Grand Prix