The footage shows Trump growing increasingly prickly as CBS anchor Lesley Stahl presses him on a host of topics, including his response to the coronavirus pandemic, his slipping support among suburban women, the lack of masks at his rallies, and the “Obamacare” replacement plan he has long promised but failed to unveil.

“Look at the bias, hatred and rudeness on behalf of 60 Minutes and CBS,” Trump wrote Thursday as he tweeted the Facebook link. And he again preemptively criticized the moderator of Thursday night's final presidential debate. 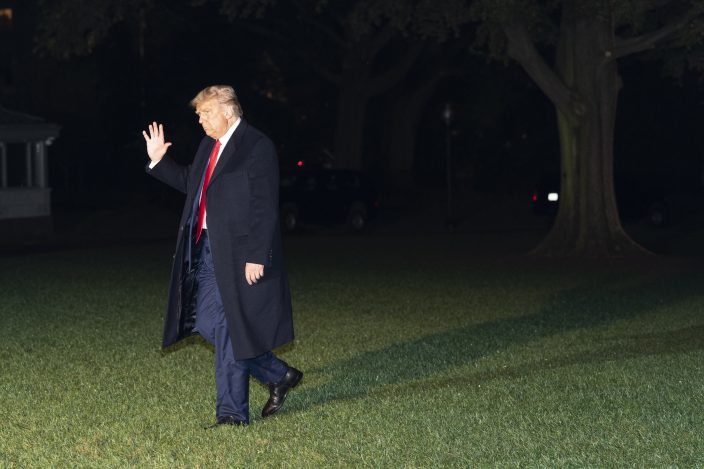 President Donald Trump waves as he walks on the South Lawn of the White House after stepping off Marine One, Wednesday, Oct. 21, 2020, in Washington, as he returns from a campaign rally in North Carolina. (AP PhotoAlex Brandon)

Throughout the interview, Trump returns to attacks on Joe Biden's son, based on an unconfirmed New York Post report, and accuses the media of being too soft on his Democratic rival.

As Stahl comments at one point that Trump is offering attack after attack, Trump responds: “It's not attack, it's defense. It's defense against attacks.”

As Trump continued to throw unsubstantiated allegations at Biden and former President Barack Obama, Stahl tried to explain: “This is ‘60 Minutes’ and we can't put on things we can't verify."

But Trump continued to criticize the mainstream media.

“Leslie, you’re discrediting yourself," he said.

The interview began on a tense footing as Stahl asked the president as the camera started rolling, “Are you ready for some tough questions?” and only grew more testy.

“You’re so negative,” he later commented.

“The White House’s unprecedented decision to disregard their agreement with CBS News and release their footage will not deter 60 MINUTES from providing its full, fair and contextual reporting which presidents have participated in for decades,” the network said in a statement.

“60 MINUTES,” it continued, "is widely respected for bringing its hallmark fairness, deep reporting and informative context to viewers each week. Few journalists have the presidential interview experience Lesley Stahl has delivered over her decades as one of the premier correspondents in America and we look forward to audiences seeing her third interview with President Trump and subsequent interview with Vice President Pence this weekend.”