The Arizona Cardinals are rolling and have shown they're serious about making a move up the standings in the NFC West. The problem is the other three teams in the division aren't going to budge easily.

The Cardinals (4-2) begin a three-game homestand on Sunday night when they host the undefeated Seattle Seahawks. Arizona's coming off a short week of preparation after an impressive 38-10 victory over the Dallas Cowboys on “Monday Night Football.” Seattle (5-0) has the benefit of extra rest after coming off a bye week.

Arizona coach Kliff Kingsbury said preparing for the Seahawks is another tough test in a season full of them. The four teams in the NFC West, including the Los Angeles Rams and San Francisco 49ers, all have at least a .500 record and are a combined 16-7. 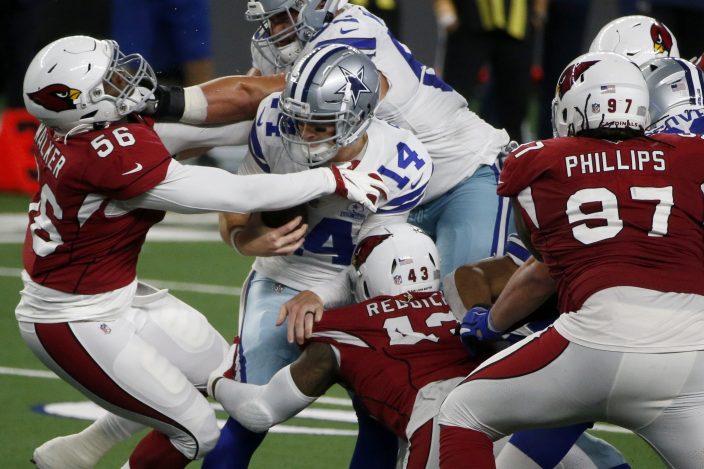 “Week in and week out, you see those scores, you watch the tape and just tremendous players, tremendous coaching,” Kingsbury said. “Very physical division, guys are flying all around and making plays week in and week out. It definitely motivates you to work harder and be better knowing what’s out in front of you.”

Seattle coach Pete Carroll said he was impressed by how well Arizona played against the Cowboys.

“The Cardinals couldn’t have done more to catch your attention than what they did Monday night,” Carroll said. “They looked great. They’re red hot and explosive and fired up and all of that. We’d better get our game right to have a chance.”

Seattle Seahawks quarterback Russell Wilson throws against the Minnesota Vikings during the second half of an NFL football game, Sunday, Oct. 11, 2020, in Seattle. (AP PhotoJohn Froschauer)

The Seahawks are undefeated despite giving up the most total yards in the NFL. The defense now has to try and contain Arizona's second-year quarterback Kyler Murray, who has run and thrown for touchdowns in five out of six games this season.

Murray was a little off-target against the Cowboys, completing just 9 of 24 throws. But he hit on an 80-yard touchdown pass to Christian Kirk and threw for a career-high 380 yards against the New York Jets two weeks ago.

“He can do everything. So I never sleep on him throwing the ball,” Seattle cornerback Quandre Diggs said. “Everybody’s going over the top about how crazy of an athlete he is, how fast he is, but he can throw the ball really, really well.” 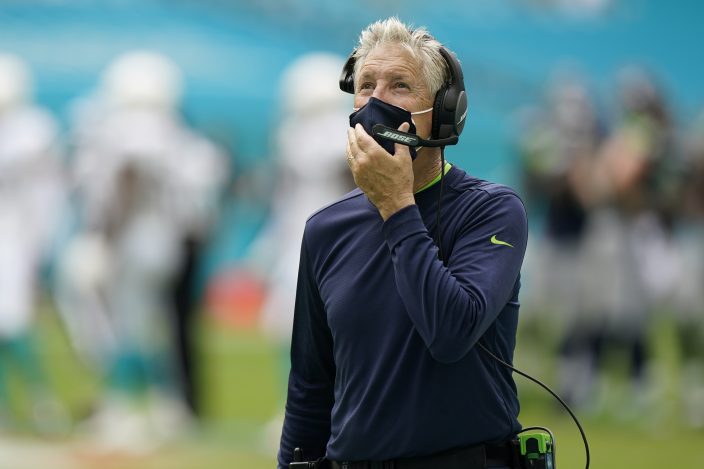 Seattle Seahawks head coach Pete Carroll looks up during the first half of an NFL football game against the Miami Dolphins, Sunday, Oct. 4, 2020, in Miami Gardens, Fla. (AP PhotoWilfredo Lee)

The Seattle-Arizona game was moved by the NFL to Sunday night in a schedule change that happened on Thursday.

The NFL shifted the Las Vegas game against Tampa Bay out of prime time after several Raiders players have been unable to practice this week because of contact tracing from the coronavirus. Arizona Cardinals head coach Kliff Kingsbury, center in black, jogs onto the field after their 38-10 win against the Dallas Cowboys in an NFL football game in Arlington, Texas, Monday, Oct. 19, 2020. (AP PhotoRon Jenkins)

Seattle’s trip to Arizona will finally immerse the Seahawks into the NFC West. Seattle has yet to play a divisional matchup, but that’s about to change in a hurry. Beginning with the game against the Cardinals, the Seahawks will play four of the next five against division foes, with matchups against Arizona as bookends to the challenging stretch.

Seattle also hosts San Francisco next week and travels to the Los Angeles Rams in Week 10. The Seahawks' lone non-division game during the stretch comes in Week 9 when they travel to Buffalo.

“It’s time to get rolling. This is when the real ball starts,” Seattle defensive tackle Jarran Reed said.

Arizona linebacker Haason Reddick proved to be a capable replacement on Monday for 2019 All-Pro Chandler Jones, who is out for the season because of a biceps injury suffered on Oct. 11. Reddick had two sacks against the Cowboys and has looked much more comfortable since switching to outside linebacker. The two-sack game was a breakout performance for a player who’s been slightly disappointing since being taken with the 13th overall pick in 2017.

“He’s much more comfortable where he’s at now, and you’re seeing the results,” Kingsbury said. “He’s able to use his athleticism. He’s a tough player, a physical player, very competitive. So it’s been awesome to see him have that success after kind of battling through what he dealt with.”

It’s taken just five games of his second season for DK Metcalf to announce himself as one of the top young wide receivers in the game. The last time he was on the field two weeks ago, Metcalf was catching his fifth touchdown pass of the season in the closing seconds for the winning score in Seattle’s 27-26 win over Minnesota.

Metcalf is leading the NFL in yards per reception at 22.5. He’s second in yards per game at 99.2, trailing only Arizona’s DeAndre Hopkins. His 496 yards receiving is more than halfway to the entire total from his rookie season when he had 900 yards receiving.

Perhaps most notable, of Metcalf’s 22 receptions, 19 have gone for first downs.

Chris Carson has yet to have a breakout game running the ball this season. That could change versus Arizona, a team he’s had great success against in limited opportunities. In three career games against the Cardinals, Carson has rushed for more than 100 yards twice. In the third game -- in Week 16 last season -- Carson had 40 yards on eight carries before suffering a season-ending hip injury in the second quarter.

Carson's best rushing performance this season came in Week 4 against Miami when he rushed for 80 yards on 16 carries.

US consumer confidence drops to 96.1 as virus spreads

U.S. consumer confidence fell to a ...

Of the five players who made up Li ...