The Atlanta Falcons actually have a shot at a winning streak.

Ditto for the Detroit Lions, who haven’t won back-to-back games in more than a year.

At the moment, that's the sole focus for these struggling teams. 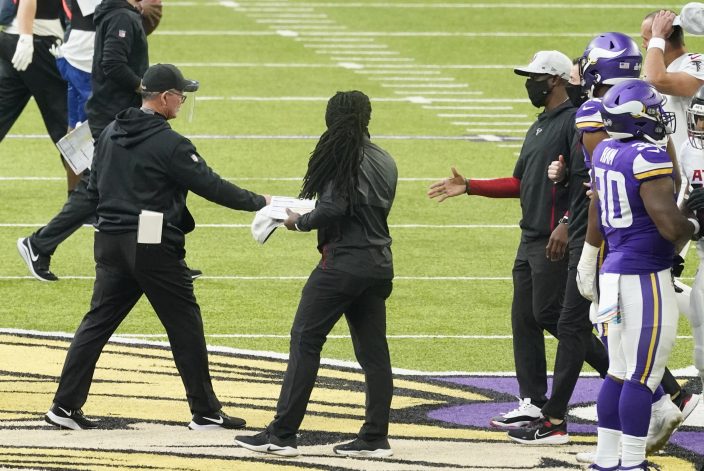 “I stopped looking at the standings about three weeks ago,” Falcons running back Todd Gurley said with a chuckle. “Just focus on the next week and the rest will take care of itself.”

Atlanta (1-5) began its season with five straight losses, becoming the first team in NFL history to lose consecutive games after leading by at least 15 points in the fourth quarter. 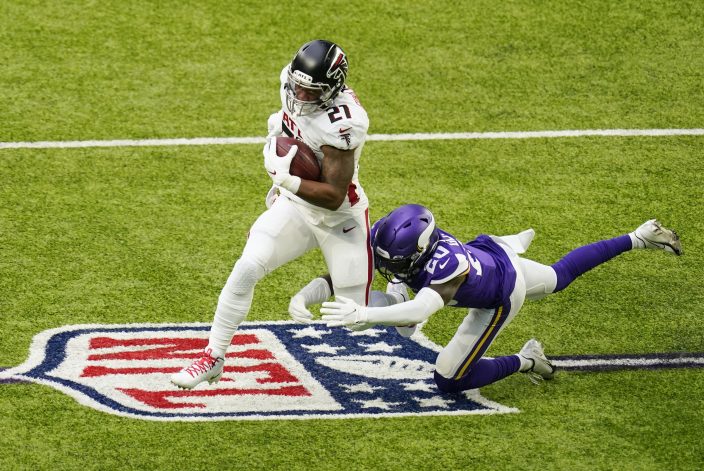 That led to the firing of coach Dan Quinn, who was replaced on an interim basis by defensive coordinator Raheem Morris.

The Falcons responded to the coaching change with an impressive 40-23 victory over the Minnesota Vikings, which lightened the mood considerably in the A-T-L.

“The guys are adopting this 1-0 mentality,” said Morris, who is hoping to work his way into the mix as Quinn's permanent replacement. “Everybody I see just keeps saying, ‘Hey, let’s go 1-0 again.'”

Coming off a bye week, the Lions (2-3) romped to a 34-16 victory at Jacksonville, finally showing they could hold a double-digit lead.

The Lions haven't had a winning streak since Weeks 2 and 3 of the 2019 season.

“That’s good for everybody just to have a little bit of confidence in some of the things we were doing and be able to see it and honestly see what I would call ‘two weeks of work’ really show up in a game,” said Detroit's Matt Patricia, who is facing questions about his coaching future.

Mimicking the Falcons, Detroit squandered leads of 17, 14 and 11 points in its three losses.

The bye week provided a chance to reset.

“We thought it was a really good time for us to grind it out and really take a look at the first four games," Patricia said.

Both teams can cling to the hope that better days are ahead. The Lions are heading into what appears to be the easier part of their schedule, while the last-place Falcons have played only one game against NFC South opponents.

“There's always light at end of the tunnel,” Gurley said.

Some things to watch for when the Falcons host the Lions before a socially distanced crowd at Mercedes-Benz Stadium:

After going 30 consecutive possessions without a touchdown pass, Falcons quarterback Matt Ryan got back on track against the Vikings.

Ryan completed 30 of 40 passes for 371 yards and four touchdowns, with no interceptions, to earn NFC offensive player of the week honors.

Ryan joined Drew Brees, Tom Brady and Aaron Rodgers as the only players in NFL history to complete at least 75 percent of their passes while passing for at least 350 yards and four touchdowns without an interception in multiple games.

With Julio Jones and Calvin Ridley at his disposal, Ryan may have a chance for another big day. The Lions allowed Jacksonville's Keelan Cole to catch six passes for 143 yards.

“There’s still a lot of work to do,” Ryan said. “We’ve got to find a way to get the job done this week. Every week, there’s a new set of challenges.”

The Lions may be moving toward the realization that rookie D’Andre Swift deserves the lead role in the backfield over 35-year-old Adrian Peterson, one of the great runners in NFL history.

Swift went for 116 yards and two touchdowns against the Jaguars, including a 54-yard burst that was the team’s longest rushing play of the season.

“There was a couple of really nice runs for him, particularly on our wide zones that he made some nice cuts, had some really good reads and I think from that point, maybe we gave him a couple extra carries because he was running it and seeing it so well,” offensive coordinator Darrell Bevell said.

Swift got off to a rough start this season when he dropped what could have been the winning touchdown in the final seconds of the opener against the Chicago Bears. But he's bounced back from that blunder, ranking second on the team with 16 receptions and averaging 6.1 yards per rush.

Before writing off Peterson, it is worth noting that he rushed for 93 yards last week and joined receiver Danny Amendola in pulling off a feat that hadn't been done in two decades.

With Amendola picking up 81 yards receiving, they became the first teammates at least 34 years old to have 80-plus yards rushing and receiving since 2000, when Rich Gannon and Tim Brown did it with the Raiders.

After struggling to slow the run early in the season, the Lions held Jacksonville to just 44 yards on the ground.

Now, they've got to face Gurley, who seems to be getting up to the speed in the Falcons offense. He rushed for 121 yards and added 29 yards receiving, marking his 15th career game with at least 150 yards from scrimmage since entering the league in 2015.

That's more than any other player over that span. He had been tied with Ezekiel Elliott and Christian McCaffrey.

Younghoe Koo has become a valuable weapon for the Falcons, making all but one of 16 attempts — including both tries from at least 50 yards.

Meanwhile, there's concern in Detroit over Matt Prater’s accuracy from long range. He's missed all three of his chances from 50 yards after going 7 of 8 at that distance a year ago.

Of course, it's also worth noting that Prater remains perfect inside of 50.