Fresh off winning the first NFL game ever played in Las Vegas, Raiders quarterback Derek Carr talked about how seeing Tom Brady’s picture on the front page of the newspaper this offseason as his possible replacement added fuel to his fire.

Carr now gets a chance to see Brady in person when the Raiders (3-2) host the Tampa Bay Buccaneers (4-2) on Sunday. Carr has already outplayed Drew Brees and Patrick Mahomes in wins this season and now can do the same against the six-time Super Bowl champion Brady.

“I really just don’t care,” Carr said. “I’m just doing my job, man. I’ve spent too many hours caring about that stuff, trying to prove the facts and those kinds of things. I just don’t care anymore. I’m here to do my job at the highest level I can possibly give to this team. ... I feel like we are at a good place right now, but coming off the bye week we've got to make sure we’re not sluggish.” 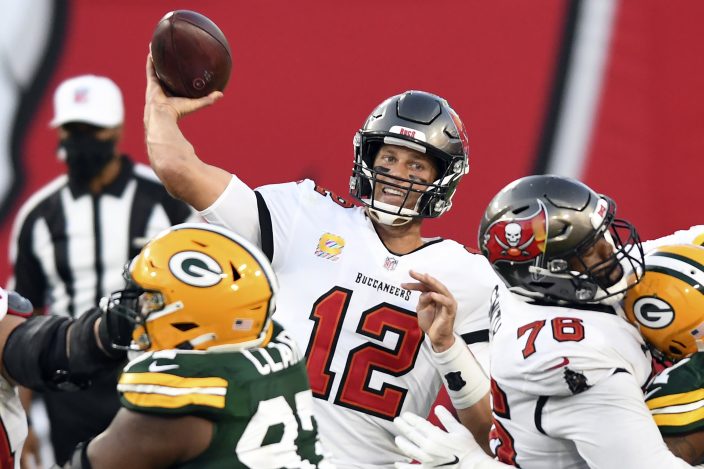 Las Vegas’ 40-32 win at Kansas City before the bye was the biggest for the franchise in years as the offense delivered one of its best games and the defense slowed Mahomes in the second half.

They could be short-handed for this game after the entire starting offensive line was placed on the COVID-19 list during the week after right tackle Trent Brown tested positive for the virus. If the other players keep testing negative they could be back for the game, which was moved from Sunday night to the afternoon.

Carr is playing perhaps his best football of his seven-year career as the addition of speedy rookie Henry Ruggs III has helped him be more aggressive pushing the ball downfield, while opening things up underneath for tight end Darren Waller and running back Josh Jacobs. 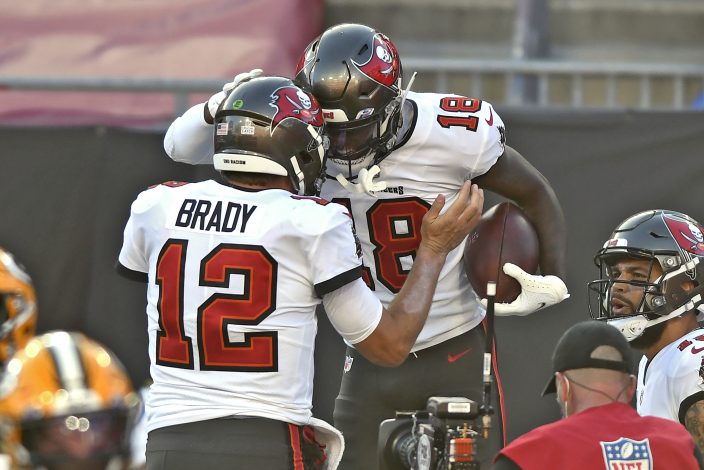 Carr has career highs so far in passer rating (115.9), yards per attempt (8.2) and completion percentage (73.1), while throwing 11 TD passes and only one interception.

“I think just the amount of time he’s spent with Jon (Gruden) now, knowing the offense and he’s a gym rat,” Bucs coach Bruce Arians said. “He’s in the office all the time studying. They put some great weapons around him now with Waller, Ruggs and Jacobs. That’s one of the best trios there is in football right now, but they’ve got other guys, too. Derek is protecting the football better.”

The situation with Brown made things difficult for the Raiders in their preparation for the game. They had to prepare for the game with four backup linemen and three practice squad players, while not knowing whether starters Kolton Miller, Denzelle Good, Rodney Hudson and Gabe Jackson would be able to play. Safety Johnathan Abram also was placed on the COVID-19 list because of close contacts.

“I don’t think that changes your mentality,” offensive coordinator Greg Olson said. “We’ve had situations where guys have gone down this season, we’ve lost some players. ... We’ve lost players and that’s just the mindset that we want our players to have and our offensive players to have. Everyone’s got to be prepared to go at any time and opportunities come in a lot of different ways, but we just prepare the same.”

Facing Brady brings up some bad memories for Gruden. The first time he played against Brady came in the 2001 playoffs when the “Tuck Rule” turned an apparent Raiders win into a loss after what appeared to be a game-sealing fumble was overturned on replay. New England won the game in OT and went on for its first of six Super Bowl titles with Brady. The loss ended Gruden’s first tenure with the Raiders.

“I’ve only been around him a few times — not too often — but it gets brought up every time we are around one another. I could see why he hasn’t gotten over it,” Brady said. “That was just an unbelievable game. I still see it today and it’s a great part of my football history and it’s probably a very sour part of their football history, but that’s the way it goes.”

The Bucs lead the NFL in total defense, allowing 282 yards per game. They’re No. 1 against the run (64.3) and tied with Baltimore for second with 11 takeaways — one behind Cleveland. They had five sacks and intercepted Aaron Rodgers twice, returning one of them for a touchdown during last week’s 38-10 rout of Green Bay, the league’s highest scoring team. The Packers finished with 201 yards, 52 after halftime. Arians said last week’s dominating performance set a standard for the defense moving forward.

“It was just a matter of letting loose, not being afraid to make a mistake and just go play. ... Just play like we’re capable of playing and don’t play — it’s not scared, just cautious,” Arians said. “Turn it loose.”

Gruden faces the Bucs for the first time since being fired as their coach following the 2008 season. Gruden spent seven years in Tampa Bay, beating the Raiders for the Super Bowl title in his first season in 2002 and winning a franchise-best 57 games in his tenure.

“I try not to get too deep, too philosophical,” Gruden said about facing his former team. “I had a great time in Tampa. A lot of my best friends are still there and live there, so I’m looking forward to competing.”

Tampa Bay’s Ronald Jones is aiming for his fourth consecutive game with 100 yards rushing. The third-year pro who shares the workload with Leonard Fournette and LeSean McCoy, who’ve both been slowed by ankle injuries, is third in the league behind Derrick Henry and Dalvin Cook with 472 yards.

Jones is tied with Cadillac Williams and Doug Martin for the second-longest streak of 100-yard rushing games in franchise history, trailing only James Wilder’s six-game streak in 1984-85.