Gardner Minshew and Justin Herbert don't remember much about the previous time they faced each other. The only thing they are focused on is trying to help their teams snap losing streaks.

Minshew's Jacksonville Jaguars and Herbert's Los Angeles Chargers are looking for their first wins since Week 1. The Jaguars (1-5) have dropped five straight while the Chargers (1-4) have lost their past four.

“It’s easy to get frustrated. It’s sometimes hard to find the bright side of things, but that’s what we have to do, and I think that’s what we are doing right now,” Minshew said. 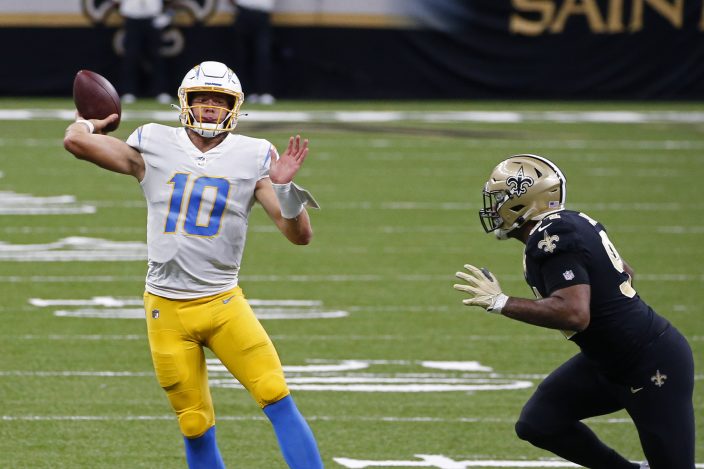 Minshew says he hasn't met Herbert, but he does have a victory over him from 2018 when he threw four touchdowns in Washington State's 34-20 victory over Oregon. Herbert said the only thing that stands out from that game is that the Ducks lost.

“He’s been really fun to watch and just the way he’s handled everything,” Herbert said of Minshew. “He is a top-notch guy and has had a lot of success on the field. I'm really glad to see a Pac 12 guy like that.”

Minshew played in 14 games and started 12 as a rookie last season after the Jaguars drafted him in the sixth round. He became only the fourth rookie to throw for 20 touchdowns with six or fewer interceptions, leading Jacksonville to six wins.

Success has been harder to come by this season. Even though Minshew has completed 25 or more passes in five straight games, he has also been picked off five times. Jacksonville has been plagued by slow starts during its losing streak, being outscored 82-40 during the first half.

Herbert, the sixth overall pick in April's draft, has exceeded expectations. His 68.8% completion rate and 107.1 passer rating in four starts are the highest by a rookie quarterback in NFL history with a minimum of 100 attempts.

Slow starts haven't been a problem for Los Angeles; it has been being able to hold on to a lead. The Chargers have blown double-digit advantages in three of their last four games, including 17-point second-quarter leads in the past two.

“I think finishing in the second half is gonna be huge for us. And putting together a full game is what’s gonna separate us,” Herbert said.

With Austin Ekeler on injured reserve with a hamstring injury, the Chargers will need more production out of Joshua Kelley and Justin Jackson to prevent teams from consistently applying pressure to Herbert.

Los Angeles is averaging about 2.9 yards per carry the past two games and has had eight carries go for no gain or negative yards. In its first three games it was 4.3 yards per carry and only seven attempts that were stuffed.

The Chargers may try to simplify their defensive game plan after their recent run of squandering leads. Defensive coordinator Gus Bradley said they have added more aggressive schemes but have been overwhelmed at times, especially late in games.

Another key will be for the Chargers to get consistent pressure on the quarterback, which is something they haven't done well recently. They had only five pressures in last Monday's 30-27 loss at New Orleans.

Jacksonville hopes to get kicker Josh Lambo (hip) back after missing the last four games, losses in which the Jags used four different replacements. It would be a fitting return for a guy the Chargers gave up on in 2017.

The Jaguars realized how spoiled they’ve been with Lambo the last four weeks, when Brandon Wright, Aldrick Rosas, Stephen Hauschka and Jon Brown missed a combined four field goals and an extra point.

Even though the Jaguars won in Oakland in December — the final game for the Raiders in the historic Coliseum — they have had little luck on the West Coast. Jacksonville is 3-12 on the opposite coast, with all three wins coming in Oakland.

They are 0-2 in San Francisco, 0-3 in Seattle and 0-4 in San Diego. Maybe the trend will change with their first trip to Los Angeles.