Sri Lanka's Parliament by a large majority has approved a constitutional amendment concentrating powers under President Gotabaya Rajapaksa and reversing reforms a previous government had made to curb authoritarianism.

After the August elections gave him the parliamentary votes to change the charter, Rajapaksa had said the amendment would be his government's priority because the reduced presidential powers hindered his work.

The 20th Amendment to the constitution was passed late Thursday with a 91-vote majority with 156 lawmakers in the 225-member Parliament voting in favor. Sixty-five lawmakers voted against. 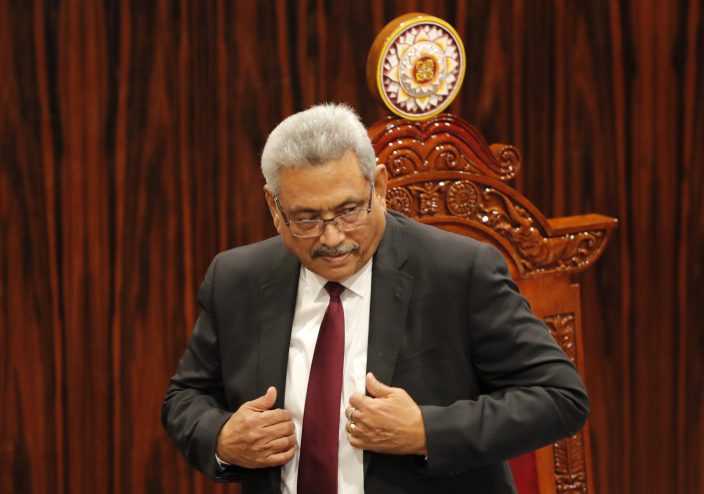 FILE - In this Jan. 3, 2020, file photo, Sri Lankan President Gotabaya Rajapaksa leaves after addressing parliament during the ceremonial inauguration of the session, in Colombo, Sri Lanka. A proposed amendment to Sri Lanka’s constitution that will consolidate powers in the President’s hands has raised concerns about the independence of the country’s institutions and the impact on its ethnic minorities who fear their rights could be undermined by the majoritarian will.(AP PhotoEranga Jayawardena, File)

With the change, Rajapaksa will be able to hold ministries, as well as appoint and sack ministers. He will also be the appointing authority of the elections, public service, police, human rights, bribery or corruption investigation commissions.

These commissions were perceived as independent with a constitutional council comprising of lawmakers from different political parties and civil personalities making the appointments. With the amendment, the constitutional council is abolished for a parliamentary council whose observations the president is not bound to implement.

The president can also dissolve Parliament after two years and six months of the Legislature being elected instead of the previous law that prohibited him from dissolving Parliament until six months before its five-year term ends. 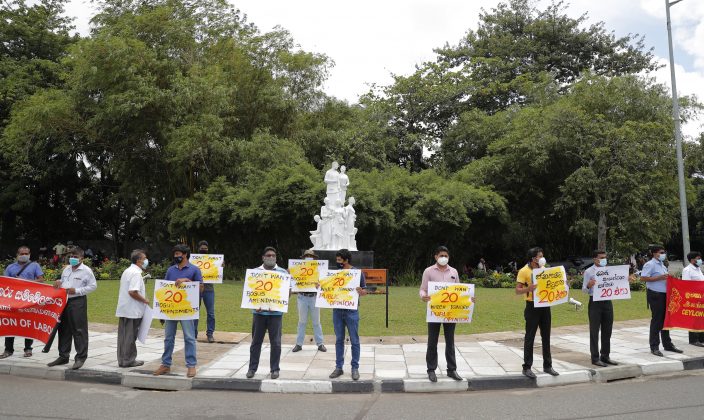 Sri Lankan trade union and civil society activists hold placards outside the parliament as they protest against a proposed constitution amendment that would consolidate power in the president’s hands in Colombo, Sri Lanka, Wednesday, Oct. 21, 2020. (AP PhotoEranga Jayawardena)

This will pave the way for a sibling who is a U.S. citizen to enter Parliament, further strengthening Rajapaksa family’s hold on Sri Lanka’s political power. Currently, Rajapaksa’s older brother, former President Mahinda Rajapaksa, is prime minister. Another older brother and three nephews are also lawmakers — three of them ministers. 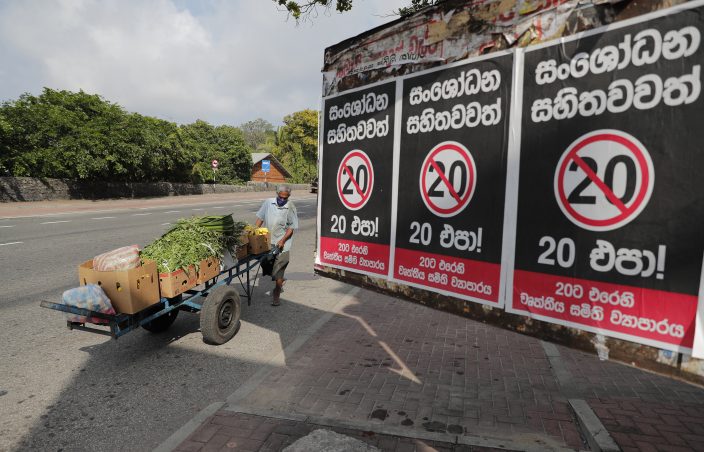 A Sri Lankan vegetable seller pushes his cart past posters against a proposed constitutional amendment that would consolidate power in the president’s hands in Colombo, Sri Lanka, Tuesday, Oct. 20, 2020. Sinhalese reads " No to 20 even with amendments". (AP PhotoEranga Jayawardena)

The amendment was passed with several changes because the Supreme Court had earlier determined certain clauses in the original proposals were against people's sovereignty and they needed approval in a public referendum to become law.

Accordingly, the government brought back clauses enabling citizens to challenge a president's actions in court, subjecting the president's office to financial audit and making the president answerable to Parliament. Also, a proposal that allowed the president to dissolve Parliament after year of the Legislature's election was changed to two years and six months.

Sri Lanka has been ruled under a powerful executive presidential system since 1978 but a reformist government in 2015 clipped much of the president's powers and gave them over to the Parliament and independent commissions, saying successive presidents had been more authoritarian.

However, Rajapaksa said reduced powers has deterred him from performing his duties.

After weathering criticism for cer ...

UN: Little time left to save millions of starving Yemen ...

The window to prevent a famine in ...