President Donald Trump and Democratic challenger Joe Biden met for the second and last time on a debate stage Thursday after a previously scheduled town hall debate was scrapped after the Republican incumbent became one of the millions of Americans to contract coronavirus.

For Trump, the matchup at Tennessee’s Belmont University was perhaps the final opportunity to change the dynamics of a race dominated, much to his chagrin, by his response to the pandemic and its economic fallout. For Biden, it was 90 minutes to solidify an apparent lead less than two weeks before the election. 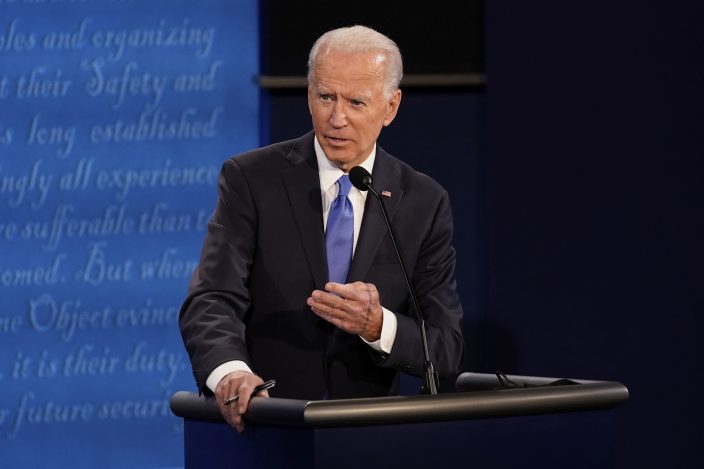 Trump's difficulty articulating a defense of his handling of the coronavirus remains a drag on his campaign at a critical juncture. The opening topic of the debate was entirely predictable — Trump has received variations of the same question in interviews and has rarely delivered a clear answer.

Asked to outline his plan for the future, Trump instead asserted his prior handling was without fault and predicted a rosy reversal to the pandemic that has killed more than 220,000 Americans.

Biden, who has sought to prosecute Trump’s handling of the virus in his closing pitch to voters, came prepared. “Anyone who’s responsible for that many deaths should not remain as president of the United States of America,” he said.

Three weeks after drawing bipartisan criticism for his frequent interruptions and badgering of his Democratic rival, Trump adopted a more subdued tone in the early portion of the debate.

Trump took to asking moderator Kristen Welker for the opportunity to follow up on Biden’s answers — “If I may?” — rather than just jumping in, and he thanked Welker repeatedly to boot.

Out of the gate, this debate seemed different from the first outing, when Trump’s incessant interruptions and flouting of time limits derailed the 90-minute contest from the outset.

Sure, there still were digs.

“We can’t lock ourselves up in a basement like Joe does,” Trump said, reprising his spring and summer attacks on Biden staying at his residence rather than campaigning in-person amid the pandemic.

Biden smirked, laughed and shook his head at Trump. He mocked Trump for once suggesting bleach helped kill coronavirus.

The two men had a lengthy back-and-forth about their personal finances and family business entanglements.

But on the whole, voters at home got something they didn’t get on Sept. 29: a debate.

It marked a recognition by Trump that his bombastic side was a liability with the seniors and suburban women voters who have flocked from the GOP to Democrats.

Aiming to alter the trajectory of the race, Trump returned to a tactic that he believes boosted him to the Oval Office four years ago — relentless personal attacks on his opponent.

Trump repeatedly leveled unsupported allegations against Biden and his son Hunter in an attempt to cast his rival and his family as corrupt.

Trump offered no hard proof for his assertions, and he has a record of making claims that don't withstand scrutiny.

A larger question may be whether voters are moved at all, especially those undecided voters whom both candidates are trying to win over.

WHAT IS THE REAL IMPACT?

More than 46 million Americans had cast ballots by the time the debate started. Both campaigns acknowledge Biden is has a clear edge for the national popular vote.

But Trump still has a path to a second term, through battleground states, by winning a majority in the Electoral College.

So the debate still has the potential to shape the race, even with a relatively small pool of voters who say they are undecided.

Trump made it his mission to sully Biden's preferred image as an elected official who looks out for the little guy. The president hammered the Democratic nominee as a career politician out to enrich his family.

That's not necessarily about persuading people to vote for Trump, who himself has international business entanglements and a questionable income tax history that he's never fully disclosed to the voters. Instead, Trump's play is about making fence sitters, especially in battlegrounds like Florida or Pennsylvania or Arizona, disgusted enough with their choices to stay home.

Biden, conversely, seemed intent on steering the conversation back to Trump and his handling of the pandemic and its economic fallout. And he tried at several points to talk directly to the camera, pitching his alternative plans. Those are tactics of a challenger nursing a lead: reinforce an argument for firing the incumbent and convince wobbly undecideds you're the better option.

Puerto Rico to lock down Sundays, close marinas for hol ...

Takeaways from the Democratic debate