Maybe all the delays involving the Titans and the jumbled NFL schedule led to the kind of showcase game we all need.

Yes, the COVID-19 outbreak in Nashville provided some understandably nervous and upsetting times. And it could be a harbinger for a league attempting to play a collision sport all across the nation during a pandemic. No one should ever downplay that. 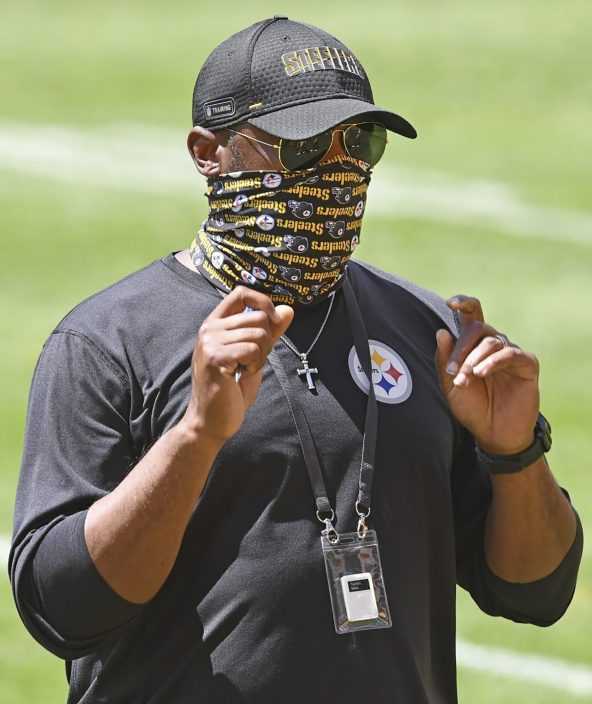 FILE - In this Aug. 17, 2020, file photo, Pittsburgh Steelers head coach Mike Tomlin looks on during practice at Heinz Field in Pittsburgh. On Sunday, Oct. 25, Steelers-Titans will be the eighth time in league history undefeated and untied teams with at least five wins have met in the regular season, the sixth such game since the 1970 merger, and only the fifth in the past 46 seasons. (Chaz PallaPittsburgh Tribune-Review via AP, File)

Sports-wise, there's no reason to downplay this matchup.

Steelers-Titans will be the eighth time in league history undefeated and untied teams with at least five wins have met in the regular season, the sixth such game since the 1970 merger, and only the fifth in the past 46 seasons.

“We’re humbled and excited to be in these five-star matchups," Steelers coach Mike Tomlin says. “We will show that appreciation by how we prepare and ultimately by how we play as we move into the weekend.” 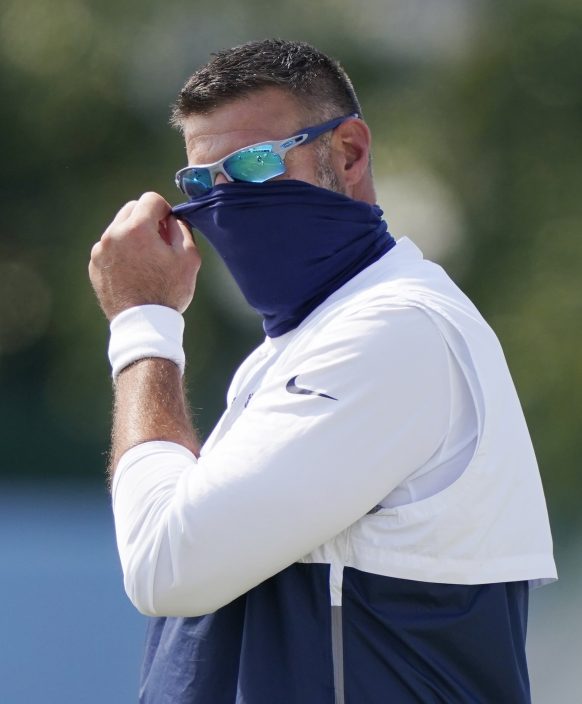 FILE - In this Aug. 18, 2020, file photo, Tennessee Titans head coach Mike Vrabel adjusts his mask during NFL football training camp in Nashville, Tenn. On Sunday, Oct. 25, Steelers-Titans will be the eighth time in league history undefeated and untied teams with at least five wins have met in the regular season, the sixth such game since the 1970 merger, and only the fifth in the past 46 seasons. (AP PhotoMark Humphrey, Pool, File)

The Steelers have played better nearly every week, and come off their usual annihilation of Cleveland. Tennessee has romped past Buffalo and needed overtime to subdue Houston since having its facility shut down amid the coronavirus issues.

“These are the type of games you look forward to, man,” says Titans linebacker Rashaan Evans, “having two undefeated teams going against each other and having great players on display on Sunday. I think it’s going to be an exciting game, and I’m excited too to be a part of it.”

It's only October, but it's fair to surmise the winner of this game is a favorite for the lone postseason bye under the new playoff format. 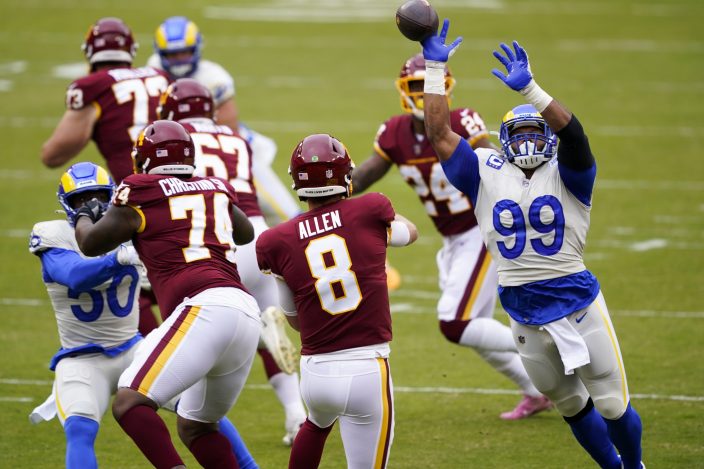 The action began with the Eagles (2-4-1) edging the Giants (1-6) 22-21 by scoring two late touchdowns, including the winner with 40 seconds remaining on Carson Wentz's 18-yard pass to Boston Scott. Philadelphia temporarily took the NFC East lead Thursday night and will maintain it if Washington defeats Dallas on Sunday. 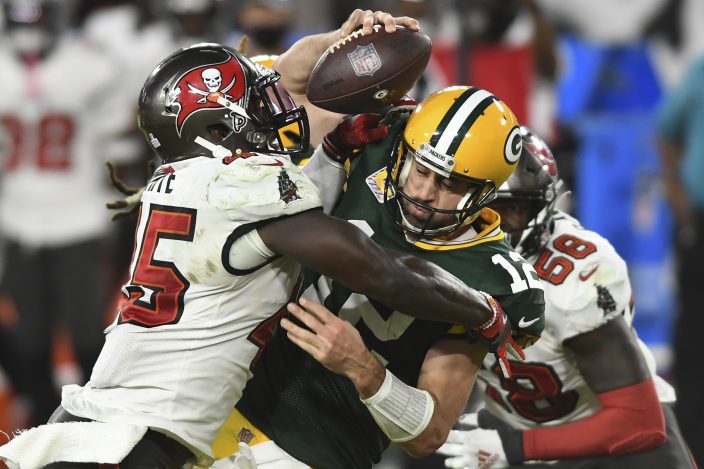 The Seahawks, whose defense has been a sieve despite the unblemished record, are 6-0-1 at Arizona since a 2012 loss.

They are scoring an NFL-high 33.8 points per game and winning the close wins: Seattle has outscored opponents by less than seven points a game. Arizona’s defense is yielding 18.7 points per game, the second-best mark in the NFL.

A victory Sunday in a game switched to prime time would be Russell Wilson’s 92nd regular-season win, tying Peyton Manning for the most in a quarterback’s first nine seasons. 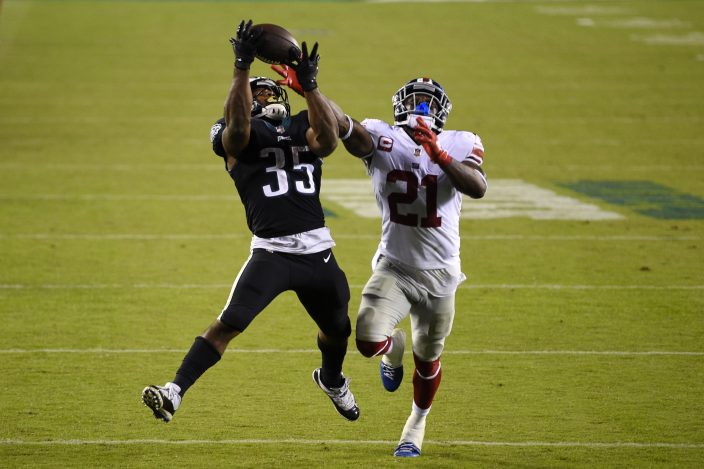 For the first time, Raiders coach Jon Gruden faces the franchise he led to a Super Bowl (2002 season) and that fired him (after 2008). At least he doesn't have to worry about snow and the Tuck Rule as he takes on Tom Brady.

Brady is 5-1 against the Raiders and his team comes off pitching a near-perfecto: The Bucs had no penalties, sacks allowed or turnovers last week in routing previously unbeaten Green Bay. They were the first team to do that since the Colts in 1999 against the Browns.

Las Vegas comes off an impressive victory at Kansas City. The Raiders had 24 QB pressures against the Chiefs, nearly equaling their total of 26 from the first four games. It was their most in a single game since having 25 vs. Denver in 2015.

But the Raiders also had a mini-outbreak of the coronavirus this week.

If new addition Le'Veon Bell plays, the Chiefs will become the first franchise to have a quarterback (Patrick Mahomes), tight end (Travis Kelce), wide receiver (Tyreek Hill) and running back (Bell) on the field who at some point was an All-Pro.

Kansas City is seeking a 10th consecutive win over the Broncos, who had won seven straight before the current skid.

The NFC North-leading Bears have their best start since the 2012 team won seven of its first eight games on the way to a 10-6 record. Chicago is 5-0 against the NFC, and the Bears are 3-0 on the road for the first time since the 2006 Super Bowl season.

Rams DT Aaron Donald is playing at a level that has earned him two Defensive Player of the Year honors. Donald plays his 101st game after getting the fourth-most sacks in NFL history through his first 100 (79 1/2). He has 7 1/2 sacks this season in the best six-game start of his career. Donald also has 3 1/2 sacks against the Bears.

Teddy Bridgewater was very popular in the Big Easy last year when he went 5-0 as the starter with Drew Brees injured. He shouldn’t expect any good vibes in his return.

New Orleans comes off a bye. Saints receiver Michael Thomas is expected to return from a Week 1 ankle injury and his one-game Week 5 team suspension stemming from a practice outburst. Thomas was the AP Offensive Player of the Year in 2019 after setting an NFL single-season record with 159 catches, and he was an All-Pro the past two seasons.

Another returning QB in Jimmy Garoppolo, who, like New England's Cam Newton, has had an up-and-down 2020. Oddly, the 49ers are 2-0 coming East, both wins at the New Jersey Meadowlands.

The Patriots come off losing at home to Denver despite not allowing a touchdown. Six field goals — and a bevy of errors by the offense and coaches — contributed mightily.

Following another flop in a statement game, the Browns can silence the doubters some by beating their Ohio rivals. They did so in Week 2, though the Bengals have gotten better since.

Browns DE Myles Garrett has a sack in five consecutive games and leads the AFC with seven. He got one of his three strip-sacks on Bengals QB Joe Burrow in the first matchup.

The other NFC Least game. It was 2001 when these two archrivals met with a lower winning percentage: They both were 0-4 and were “featured” on Monday night. Dallas won 9-7.

Given the Dallas defense right now, holding anyone to seven points in one quarter would be a major achievement.

Cowboys RB Ezekiel Elliott lost two fumbles in the loss to the Cardinals for the first time in his pro career. Elliott’s five fumbles (four lost) are two shy of his career high set two years ago.

Adam Gase has survived another week as coach of the Jets, though the prospects of his beleaguered team getting off the schneid against Buffalo are minimal. The Bills easily handled the Jets in the season opener, and Buffalo is coming in with a bad mood after two straight defeats.

Third downs could be significant. The Bills lead the NFL in third-down conversions on offense at 56.2%. New York, the only team shut out this season, went 2 of 17 at Miami and ranks last with a 30.23% conversion rate.

Aaron Rodgers comes off one of his worst performances in a 38-10 flop at Tampa Bay. The Packers look to avoid losing two straight games for the first time since Matt LaFleur took over in 2019. LaFleur began his NFL coaching career as an offensive assistant for the Texans from 2008-09.

Texans DE J.J. Watt, a three-time NFL Defensive Player of the Year, had a sack and forced a fumble at Tennessee. He needs one sack to become the first player in franchise history with 100.

Jacksonville's first game in Los Angeles, and the Jaguars enter it having lost five in a row. But they are the only team with three wide receivers with at least 25 receptions: Keelan Cole Sr. (27), rookie Laviska Shenault Jr. (26), and DJ Chark Jr. (25).

The Chargers have dropped four in a row, mostly close calls, and rookie Justin Herbert has impressed. He leads the league with a 140.9 passer rating on third downs. His 68.8% completion rate and a 107.1 passer rating are the highest by a rookie in league history with a minimum of 100 pass attempts.

A nice Bulldogs flavor visiting the ATL. Lions quarterback Matthew Stafford will playing in the state for the first time since he starred at the University of Georgia in 2008. Rookie RB D’Andre Swift and Stafford became the first former Georgia players to throw a TD pass and rush for a score as teammates in an NFL game since Charlie Trippi and Joe Geri in 1952 with the Chicago Cardinals.

Atlanta won its first game of the season by beating Minnesota as Raheem Morris took over for the fired Dan Quinn as coach.

Matchup of unbeatens in Buffalo, of all places

Much will be learned when Patriots visit Seahawks in Week 2