NEW DELHI — India has reported below 60,000 new coronavirus cases for a fifth day as the promise of a free COVID-19 vaccine turned into a key state election issue.

The Health Ministry says 54,366 new cases have taken the overall tally past 7.7 million on Friday. It also reported 690 deaths in the past 24 hours, raising total fatalities to 117,306.

India recorded a daily average of more than 61,000 cases last week. The ministry also said India’s active caseload was below 700,000. 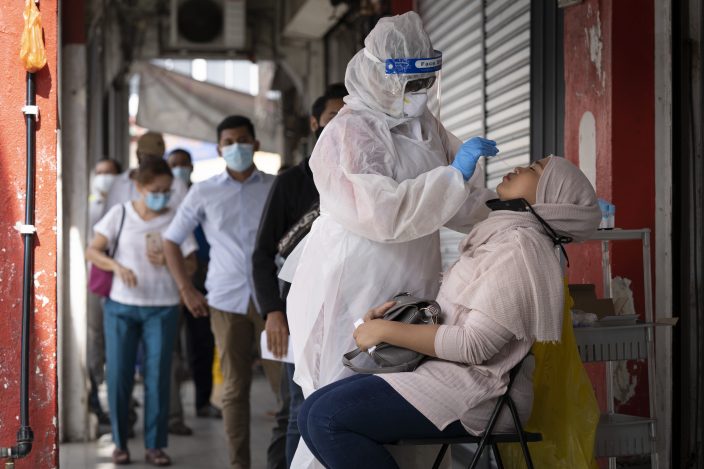 A doctor collects a sample for a coronavirus test outside a clinic in Kajang on the outskirts of Kuala Lumpur, Malaysia, Friday, Oct. 23, 2020. Malaysia restricted movements in its biggest city Kuala Lumpur, neighbouring Selangor state and the administrative capital of Putrajaya from Wednesday in an attempt to curb a sharp rise in coronavirus cases. (AP PhotoVincent Thian)

A political row erupted after Prime Minister Narendra Modi’s Hindu nationalist party promised free vaccination to people in eastern Bihar state where voting is scheduled to begin next week. Bihar is India’s third largest state with a population of about 122 million people.

Finance Minister Nirmala Sitharaman, releasing the party’s election manifesto, said every Bihar resident will be given free vaccination when it becomes available. She said at least three vaccines have reached the last trial stage and are on the cusp of production.

The promise angered the Congress and other opposition parties, which accused Modi’s party of politicizing the pandemic and playing on people’s fears. 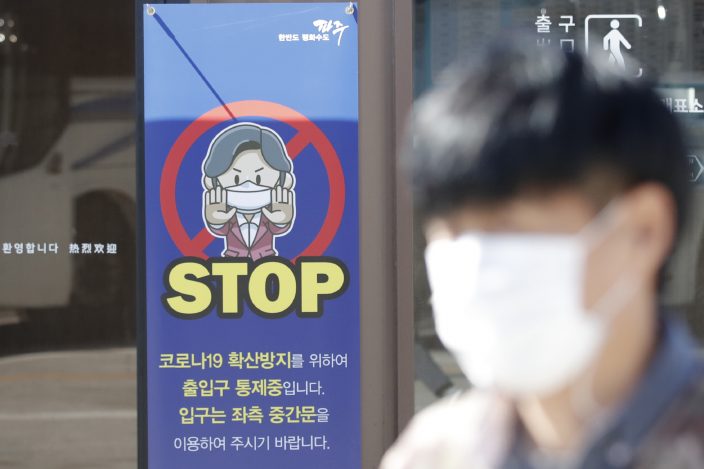 A man wearing a face mask walks past near a banner showing precaution against the coronavirus, at the Imjingak Pavilion in Paju, South Korea, Friday, Oct. 23, 2020. South Korea recorded its highest increase in coronavirus cases in more than 40 days on Friday as more infections were reported at hospitals and nursing homes. (AP PhotoLee Jin-man)

— France’s prime minister has announced a vast extension of the nightly curfew that is intended to curb the spiraling spread of the coronavirus.

— A scientist newly appointed as an advisor to the British government has expressed skepticism about focusing on the role of structural racism in the disproportionate effect that the coronavirus has on ethnic minority groups. 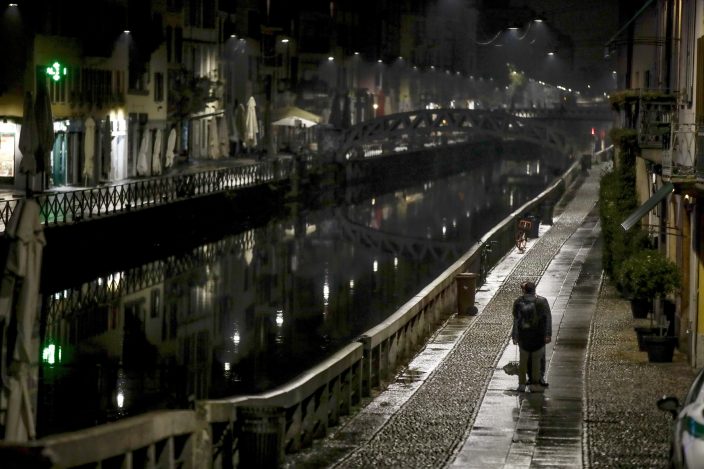 The unusually empty Navigli area, a popular evening spot of restaurants and pubs bordering canals in Milan, Italy, Thursday, Oct. 22, 2020. Authorities in regions including Italy's three largest cities have imposed curfews in a bid to slow the spread of COVID-19, as many of the cases in Lombardy's surging outbreak have occurred in Milan. On Thursday, an overnight curfew takes effect in the city, known for its lively night-time bar scene, and the rest of the region, as authorities try to slow the spread of the contagion. (AP PhotoLuca Bruno)

UNITED NATIONS — The U.N. chief says it’s “very frustrating” that leaders of the 20 major industrialized nations didn’t come together in March and establish a coordinated response to grapple with the coronavirus in all countries as he proposed. 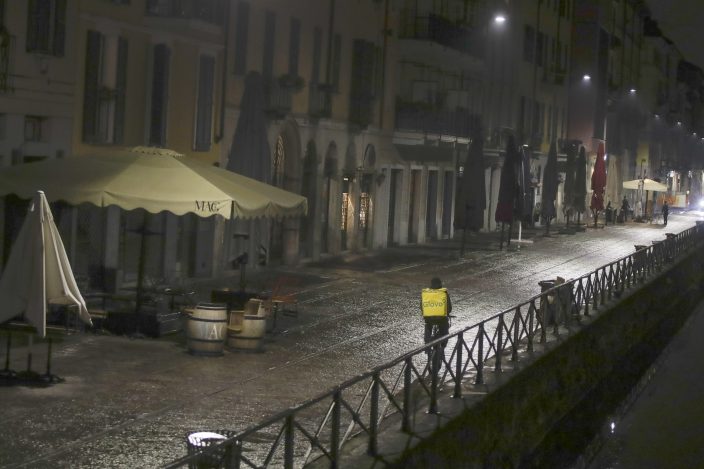 Pubs and bars are closed at the Navigli area, a popular evening spot of restaurants and pubs bordering canals in Milan, Italy, Thursday, Oct. 22, 2020. Authorities in regions including Italy's three largest cities have imposed curfews in a bid to slow the spread of COVID-19, as many of the cases in Lombardy's surging outbreak have occurred in Milan. On Thursday, an overnight curfew takes effect in the city, known for its lively night-time bar scene, and the rest of the region, as authorities try to slow the spread of the contagion. (AP PhotoLuca Bruno)

The result, he says, is every country is taking its own sometimes contradictory actions, and the virus is moving “from east to west, north to south,” with second waves of infections now affecting many countries.

Ahead of the Group of 20 summit next month, Secretary-General Antonio Guterres said in an interview with The Associated Press that he hopes the international community now understands “they need to be much more coordinated in fighting the virus.”

Guterres says the United Nations also will be “strongly advocating” during the G-20 summit for a guarantee that when a vaccine is available, “it becomes indeed available and affordable for everyone, everywhere.” 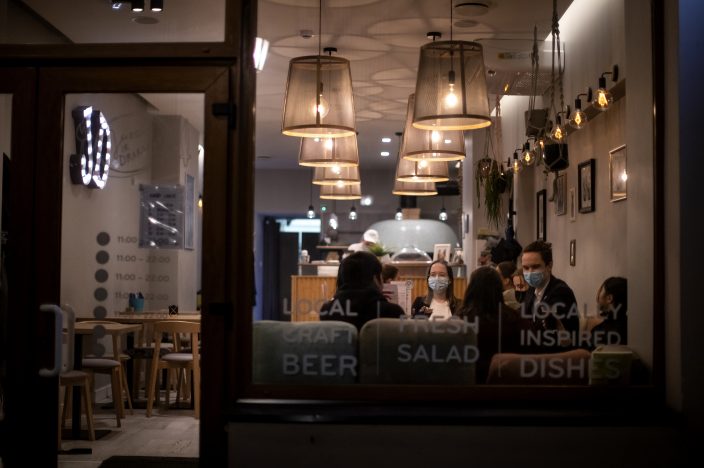 SEOUL, South Korea -- South Korea has reported 155 new confirmed cases of the coronavirus, its highest daily jump in more than 40 days as officials struggle to stem transmissions at hospitals and nursing homes.

The figures announced Friday brought the national caseload to 25,698, including 455 deaths. Officials say most of the new cases were local transmissions and primarily in the Seoul region, where hundreds of infections have been tied to a handful of hospitals and nursing homes.

A nursing home in Namyangju, east of Seoul, has emerged as the latest cluster of infections, with officials putting the facility under isolation after more than 30 workers and residents tested positive. Around 120 infections have been linked to a hospital in nearby Gwangju.

Friday’s daily jump was the highest since Sept. 11 when 176 new infections were reported.

BOISE, Idaho — A regional health board in northern Idaho has voted narrowly to repeal a local mask mandate, acting moments after hearing how the region’s hospital has been overwhelmed with COVID-19 patients and is looking at sending people as far away as Seattle for care.

The board heard Thursday that the hospital in Coeur d’Alene reached 99% capacity the previous day, even after doubling up patients in rooms and buying more beds. The board in Kootenai County then voted 4-3 to end the mask mandate. Kootenai is the third most populous county in conservative Idaho.

Gov. Brad Little has left it up to local health departments and school districts to decide on what restrictions, if any, are needed for the coronavirus pandemic.

SEATTLE — Health officials in Washington state say the number of people in the state who have been confirmed with coronavirus infections during the pandemic has surpassed 100,000.

The Department of Health reported 651 new virus cases and three new COVID-19 deaths Thursday. The latest numbers increased the state’s confirmed cases to 100,525 and the total number of people who have died to 2,289.

Inslee says cases are on the rise again in Washington, and he urges people to have fewer and shorter interactions with others.

AUSTIN, Texas — Texas Gov. Greg Abbott is sending more medical reinforcements to the El Paso area in response to a surge of coronavirus infections and cases of COVID-19, the illness the virus can cause.

The Texas Department of State Health Services and the Texas Division of Emergency Management will provide more medical personnel and equipment this week.

The move comes during the same week that El Paso County reported 3,750 new coronavirus infections, including 1,161 on Thursday. That number accounts for 17.5% of the 21,321 cases reported this week by the state’s 254 counties.

Active coronavirus cases in El Paso rose 864 Thursday to 9,569. The 558 confirmed COVID-19 patients hospitalized in El Paso, Culberson and Hudspeth counties account for more than one-third of all of that region’s hospitalized patients

HELENA, Mont. — Montana Gov. Steve Bullock says the state health department is pursuing legal action against several businesses in northwestern Montana for not following a mask mandate and other restrictions meant to prevent the spread of the coronavirus.

The announcement came Thursday as the state reported 932 newly confirmed coronavirus cases. That was far above the previous one-day high of 734.

The new cases include 173 in Yellowstone County and 112 in Flathead County, where the governor says businesses face legal action.

State officials also have launched a new website to allow people to submit complaints against businesses and events that are not complying with health directives.

ROSWELL, N.M. -- Officials at a military junior college in New Mexico say the school is under quarantine after more than 60 cadets and employees tested positive for the coronavirus. Those who tested positive are being kept isolated.

The quarantine at the New Mexico Military Institute is expected to last until Oct. 29. Parents will be allowed to visit only in special situations or emergencies, and officials say all campus facilities are being closed to the public for five weeks.

The closure comes as the state struggles with a surge in coronavirus infections. Wednesday marked another record day for daily confirmed cases, with 827, and state health officials reported an additional 669 cases Thursday. That brings the statewide total to nearly 39,380 since the pandemic began.