The second and final presidential debate, it turns out, was actually a debate — a brief interlude of normalcy in an otherwise highly abnormal year, and a reprieve for voters turned off by the candidates’ noxious first faceoff.

President Donald Trump and Democratic challenger Joe Biden spent 90 minutes Thursday sparring over their approach to the coronavirus pandemic, the future of the nation’s health insurance system and who is best positioned to de-escalate nuclear tensions with North Korea. There were heated clashes, but far fewer of the angry interruptions and crosstalk that made the opening debate nearly unwatchable.

A mute button mandated by the debate commission helped enforce decorum, clearing the way for Trump and Biden to make their closing arguments to the nation less than two weeks from Election Day. Both men have argued with pride throughout the campaign that there is little overlap between their visions for America, and that was abundantly clear in Thursday’s debate. 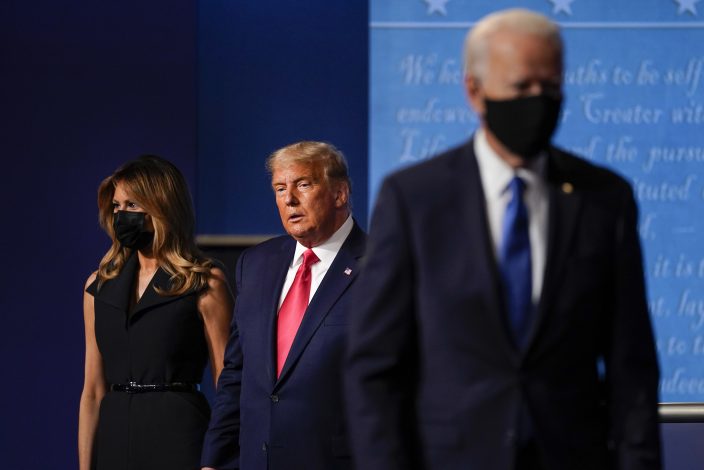 It was the president more so than Biden who entered the night needing to spark a shift in the race, given the public polls that have for weeks showed him trailing both nationally and in some key battleground states. But with nearly 50 million ballots already cast through advance voting, and views of the president long ago hardened among most voters, it appeared unlikely that a more civilized debate alone would significantly recalibrate the contest.

Trump has struggled throughout the year to shift the political terrain, unable to convince Americans that they should look past a coronavirus pandemic that has killed 225,000 Americans and infected more than 8 million. Instead, he’s been saddled by sharply negative assessments of his handling of the public health crisis, including his own COVID-19 illness earlier this month. Trump was briefly hospitalized, then quickly returned to the campaign trail for rallies that feature little mask-wearing and no attempts at social distancing.

Trump, who was the chief interrupter and aggressor in the first debate, insisted in Thursday’s debate that the country needed to “learn to live” with the virus and suggested his rival would damage the economy by taking drastic steps to shut down the country. Biden warned of a “dark winter” to come, with cases already on the rise in the U.S. as the weather cools and more activities move indoors, where the virus spreads faster. 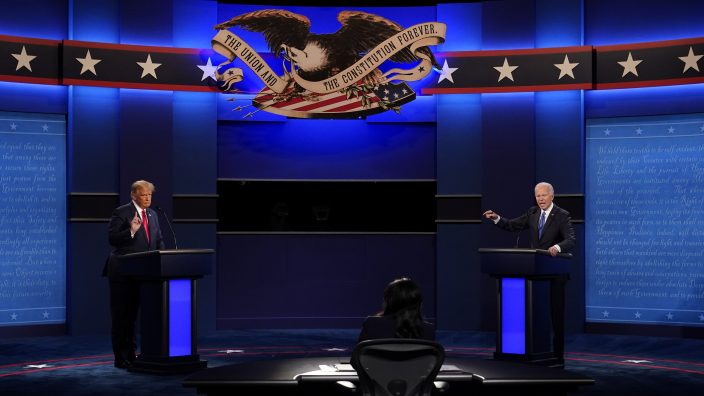 “Anyone who’s responsible for that many deaths should not remain as president of the United States,” Biden said. “I will end this. I will make sure we have a plan.”

Some of Trump’s advisers and allies had urged him in the lead-up to the debate to take a more traditional approach, focusing less on badgering Biden and more on drawing his rival out on their policy contrasts. Few had expected he would actually abide by that advice.

And though Trump was more measured than in the first contest, his more controversial impulses indeed flared at times. His answers were often filled with falsehoods, from his descriptions of initial COVID-19 death projections to his statements about the risks wind turbines pose to birds. He also made repeated references to unverified corruption allegations against Biden’s son Hunter for business dealings in Ukraine and China. 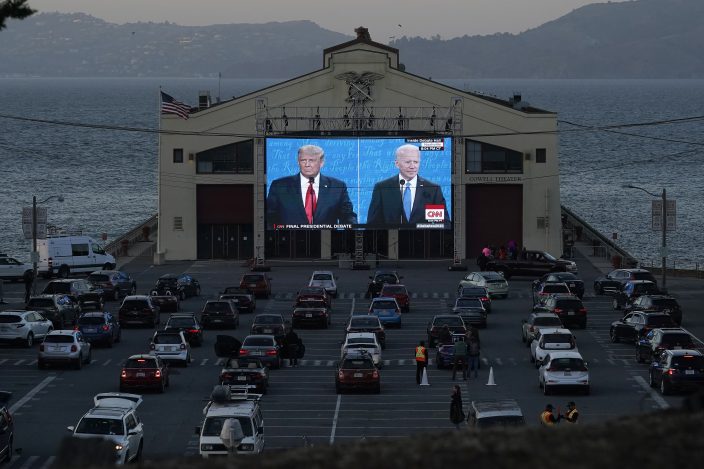 Trump’s campaign signaled in recent days that it planned to make the charges against the younger Biden a centerpiece of their closing argument to voters. In the hours before the debate, the campaign orchestrated a media appearance for a man who claims to have been one of Hunter Biden’s business partners — an attempt to create the kind of made-for-TV drama that worked for Trump in his 2016 race against Hillary Clinton.

But Biden isn’t Clinton, a candidate whose own negative standing with many Americans rivaled Trump's, and the Trump campaign’s efforts to cast him as a corrupt and money-hungry politician don’t appear to be resonate widely outside of Trump’s base.

If anything, Trump’s attempts to push the allegations in front of a wider audience in Thursday’s debate only appeared at times to ricochet back to him. After the president claimed without evidence that Biden has received money from foreign governments, the former vice president noted that his finances are detailed in more than 20 years of tax records he has made public. Trump has repeatedly refused to release his taxes, insisting he can’t do so while he is under an audit by the Internal Revenue Service.

For some frustrated Republicans, the exchanges over Hunter Biden were a prime example of what has put Trump at risk of defeat in November: a campaign that still appears to be grasping for a clear message and approach to taking on the Democratic challenger with just a handful of days before the election.

“Throwing everything at the wall to see what sticks was a fine strategy six months ago, but they’re still doing it twelve days from the election with 40 million votes already cast,” said Erick Erickson, a conservative writer.

The real number of votes cast is even higher: By the time Trump and Biden took the debate stage, more than 47 million people had already cast ballots.

Editor’s Note: Julie Pace has covered the White House and politics for the AP since 2007. Follow her at https://twitter.com/jpaceDC