Will Bruin scored off a corner kick in the third minute of second-half stoppage time, and the Seattle Sounders salvaged a 1-1 draw with the Portland Timbers on Thursday night.

After dominating most of the second half, Seattle finally found an equalizer in the dying moments of the match as Bruin was left unmarked at the back post and tapped in his first goal of the season.

It was Seattle’s first shot on target in the match and kept the Sounders and Timbers tied on top of the Western Conference standings, each with 32 points with 2½ weeks left in the regular season. It was also Bruin's first goal since April 13, 2019, when he scored twice against Toronto. Seattle Sounders goalie Stefan Frei, right, tumbles to the turf as the Portland Timbers score in the first half of an MLS soccer match Thursday, Oct. 22, 2020, in Seattle. (AP PhotoElaine Thompson)

Portland has allowed 12 goals in the final 15 minutes of a match this season.

Andres Flores scored early in the first half in his first appearance this season for Portland, giving the Timbers the early advantage. Flores scored in the 10th minute and the Timbers withstood 80 minutes of chances by Seattle before surrendering the tying goal.

It was the fourth and final meeting between the Cascadia rivals in the regular season with Portland winning twice and Seattle once to go along with the draw. 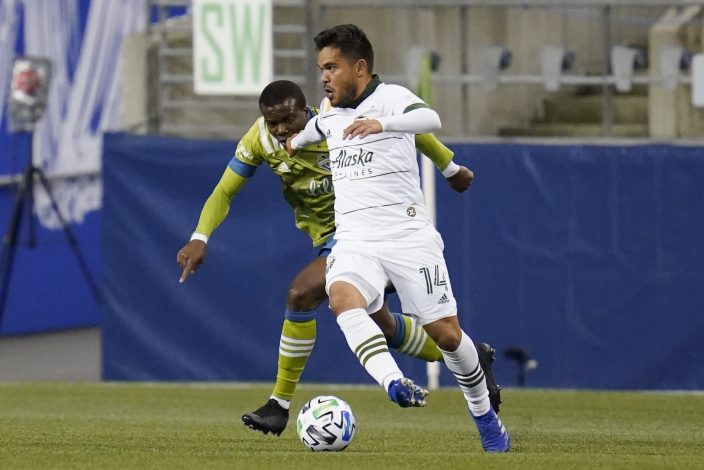 The Timbers (9-5-5) played without leading scorer Jeremy Ebobisse, who scored the only goal in Portland’s 1-1 draw with LAFC last Sunday but was also injured in the match.

Seattle (9-4-5) is now winless in its last three matches after a stretch of five wins in six matches that boosted the Sounders to the top of the Western Conference.

It wasn’t due to a lack of chances for Seattle. The Sounders controlled play for most of the second half, but failed to get any of its scoring opportunities on net to challenge Portland goalkeeper Steve Clark until Bruin’s goal. Seattle finished with 15 shots and one on target. Nicolas Lodeiro and Jordan Morris had point-blank opportunities midway through the second half, but sent their shots over the crossbar. Kelvin Leerdam also sent an open header over the bar.

Portland Timbers' Andres Flores (14) is congratulated after scoring against the Seattle Sounders in the first half of an MLS soccer match Thursday, Oct. 22, 2020, in Seattle. (AP PhotoElaine Thompson)

Flores was an unlikely candidate for the only goal. He hadn’t played for the Timbers since Sept. 22, 2019, against Minnesota United and his last goal for Portland came in 2018 at Vancouver.

But Flores was in the right spot to collect a rebound save by Seattle’s Stefan Frei and beat the Sounders goalkeeper with a right-footed shot to the near post. 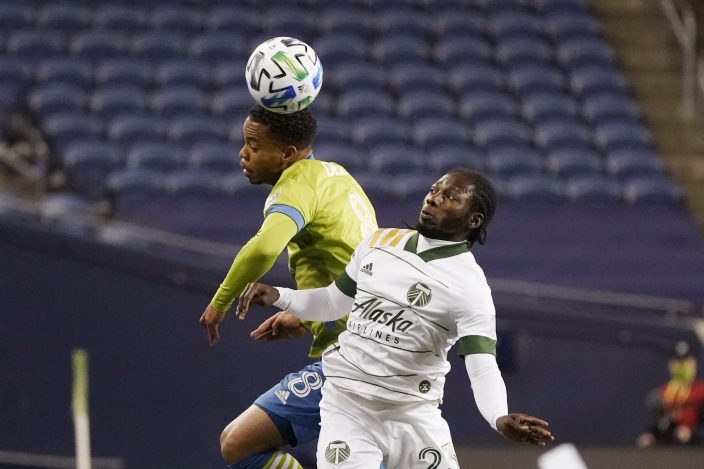 Seattle Sounders' Jordy Delem (8) heads the ball in front of Portland Timbers' Yimmi Chara in the first half of an MLS soccer match, Thursday, Oct. 22, 2020, in Seattle. (AP PhotoElaine Thompson)