Holding an 11-point lead with less than five minutes to play, the New York Giants were on the verge of a second straight win and getting back in the NFC East race.

They blew it, which is probably what one would expect from a team that opened the season by losing five straight games under new coach Joe Judge.

Carson Wentz threw two touchdown passes in the final five minutes and the Philadelphia Eagles beat the New York Giants 22-21 for their eighth straight win over their turnpike rivals to the north. 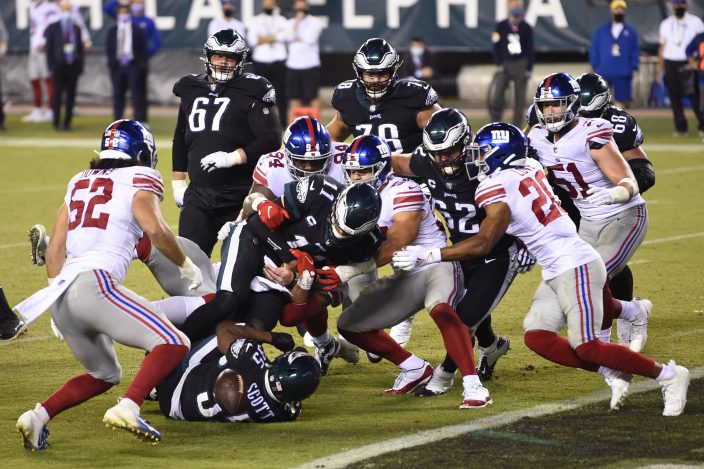 Philadelphia Eagles' Carson Wentz (11) cannot score on a two-point conversion attempt during the second half of an NFL football game against the New York Giants, Thursday, Oct. 22, 2020, in Philadelphia. (AP PhotoDerik Hamilton)

“We definitely let one get away,” said Giants tight end Evan Engram, who dropped a third-down pass just before the two-minute warning that would have allowed New York to keep possession and possibly run out the clock.

“It’s just not a good feeling,” Engram said. “We played a great fourth quarter and at the end we didn’t finish.”

The Giants opened a 21-10 lead on a short touchdown pass from Daniel Jones to Sterling Shepard, who was returning to the lineup after missing four games with a turf toe injury. Jones finished with two TD passes, an 80-yard run to set up a score, an interception and a lost fumble. 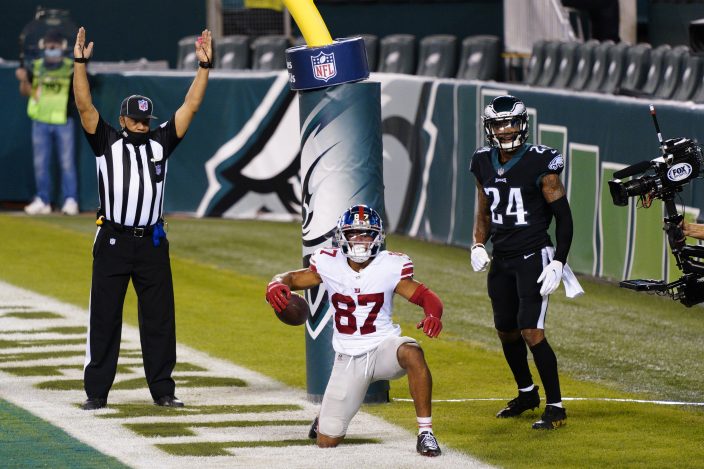 As usual, they only had themselves to blame. They gave up touchdown drives of 68 and 75 yards, saw Engram make a monstrous drop and finally saw Wentz find Boston Scott on an 18-yard pass for the game winner on a first-and-goal play with 40 seconds to go.

Safety Jabrill Peppers had the coverage on the running back who was coming out of the backfield and blamed himself.

“It was a good ball but that's a play I have to make, no ifs, ands and buts about it,” Peppers said. 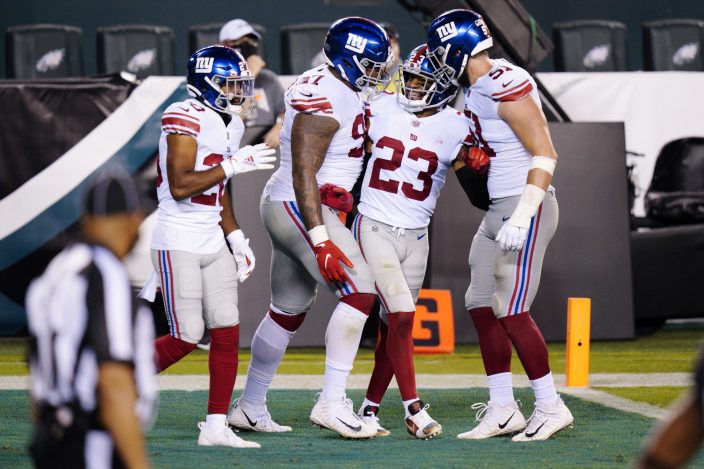 New York Giants' Logan Ryan (23) celebrates with teammates after the Giants forced a turnover on downs during the second half of an NFL football game against the Philadelphia Eagles, Thursday, Oct. 22, 2020, in Philadelphia. (AP PhotoChris Szagola)

Peppers said the loss was heartbreaking, especially with the division being wide open. Coming into the week, Dallas led with a 2-4 record.

“It hurts,” Peppers said. “We had a phenomenal chance in this game to win and we shot outselves up.”

It was a combination of bad plays and penalties that led to the loss and gave Philadelphia (2-4-1) the win. The Giants were whistled for nine penalties in the game.

“We’ve got to control the things we can control and that comes down to the penalties and the turnovers," Judge said. “We have to do a better job at that as a team to make sure we give ourselves the opportunities to capitalize on the work we’re putting in.”

econd straight win and a

Lampard not surprised to see Tottenham reborn under Mou ...