Although Khabib Nurmagomedov hasn't been inside the UFC octagon in 13 months, the life and mind of the unbeaten lightweight champion have been fully occupied.

He was scheduled to take on Tony Ferguson in April in the culmination of their epic fighting feud, but he couldn't get out of Russia due to the coronavirus pandemic. Nurmagomedov then endured the tragic loss of his father and lifelong coach, Abdulmanap, in July to a heart problem exacerbated by COVID-19.

Although he kept his grief mostly private, Nurmagomedov reportedly returned to training only a week after the death of his beloved father. He returns to the cage on Saturday night to face interim champion Justin Gaethje in the main event of UFC 254 in Abu Dhabi. 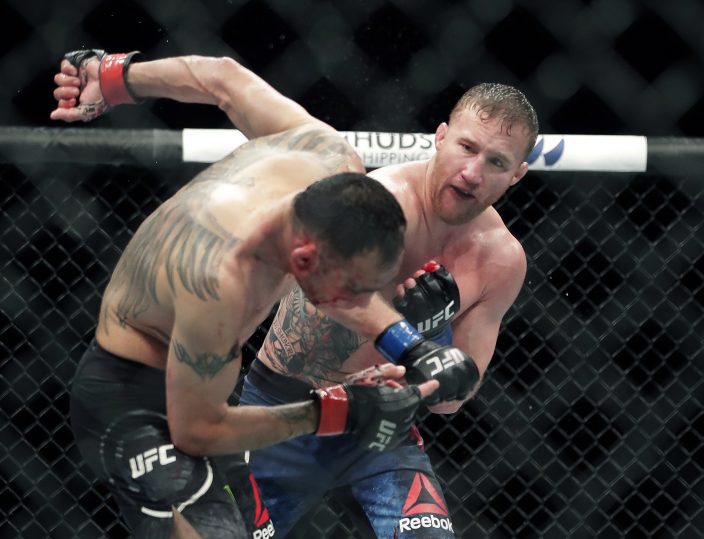 FILE - In this May 10, 2020, file photo, Tony Ferguson, left, falls backward after taking a punch from Justin Gaethje during a UFC 249 mixed martial arts boutin Jacksonville, Fla. Khabib Nurmagomedov will risk his unbeaten record and his UFC lightweight title against interim champion Gaethje in the main event of UFC 254 in Abu Dhabi on Saturday, Oct. 24, 2020. (AP PhotoJohn Raoux, File)

“Of course, it’s a little bit difficult when you have so much pressure on your shoulders,” Nurmagomedov said. “But it’s never easy.”

Nurmagomedov (28-0) achieved superstar status in 2018 by stopping Conor McGregor, and he gained worldwide notoriety a few seconds later by jumping out of the cage to fight members of McGregor's entourage. Known mostly for his wrestling-based dominance before that raucous night in Las Vegas, Nurmagomedov's bravado caught millions of fans' attention, while his vocal Muslim faith endeared him to millions more sports fans not often reached by mixed martial arts.

But Nurmagomedov had already earned the respect of fighters like Gaethje (22-2), who see the champion's discipline and determination as examples. The two fighters have been mutually respectful throughout their promotion of this bout on Fight Island, the UFC's secure Middle East bubble.

“I know he’s ultimately confident in what he does,” Gaethje said. “He’s done it 28 times. I expect him to believe that’s going to happen again. (But) I’m a performer. I always show up under the lights. I’ve been doing this as long as he has. It’s ingrained in us. I’m going to give everything I have and be proud of my performance.”

The UFC’s ninth show in the United Arab Emirates over the past 15 weeks is headlined by the single most anticipated bout in recent months, and Nurmagomedov’s global celebrity ensures it will be widely seen.

With heavy European and Asian interest in Nurmagomedov, the promotion scheduled UFC 254 for those audiences' prime-time viewing hours, rather than North America. That means the pay-per-view portion of the UFC 254 card starts in the early afternoon on the U.S. East Coast and in the late morning in Las Vegas, the UFC’s hometown.

But the main event is a fascinating clash between arguably the UFC's greatest wrestler and one of its most passionate brawlers.

Nurmagomedov's striking abilities have been responsible for only two of his UFC victories. Instead, the Dagestan-born champion wears down his opponents with wrestling and persistent, mauling pressure leading invariably to submission wins or one-sided decisions.

“He has a lot of good skills, and everything is unorthodox,” Gaethje said of Nurmagomedov. “Everything in there is (about) timing and space, and I believe he’s world-class in that regard. Doesn’t sound like he’s planning on striking much, though. He said (we'll spend) 25 minutes on the ground, so we'll see.”

Even though Gaethje is a former NCAA All-American wrestler, he has earned fortune and fame in MMA through his spectacular brawling predilections. He rolled from a World Series of Fighting title into the UFC with a series of electrifying knockout victories, and he has rebounded from back-to-back stoppage losses to Eddie Alvarez and Dustin Poirier with four more consecutive knockout wins over elite UFC opponents.

“I think he has dynamite in his hands,” Nurmagomedov said of Gaethje. “Very good kick. They’re all good when they stand up, but when I grab them, it changes a little bit. I think more than Dustin and other guys, he knows how to wrestle. It’s going to be hard, but I prepared myself to try to take him down 100 times.”

Gaethje earned his interim belt and the title shot in May with his impressive stoppage of Ferguson, the long-standing contender whose five previously scheduled bouts with Nurmagomedov had all been called off due to injuries or other problems.

Gaethje realizes his good fortune to be in this big-money bout against arguably the best lightweight in MMA history. The copper miner's son from Safford, Arizona, flew his parents to Abu Dhabi — in business class for the first time in their lives, he said gleefully — for the big event and his chance at UFC history.

“I’ve never been to a place like this before,” Gaethje said. “I’m not even supposed to be here. This is supposed to be Tony Ferguson. Thank God I got that opportunity, and I took his soul. ... We’ll both go out there and we’ll fight for our lives. It’s who we are.”