ON THE TRAIL: President Donald Trump will be in Florida; Democratic challenger Joe Biden will be in Delaware; Vice President Mike Pence will be in Pennsylvania; and Biden's running mate, Kamala Harris, will be in Georgia. 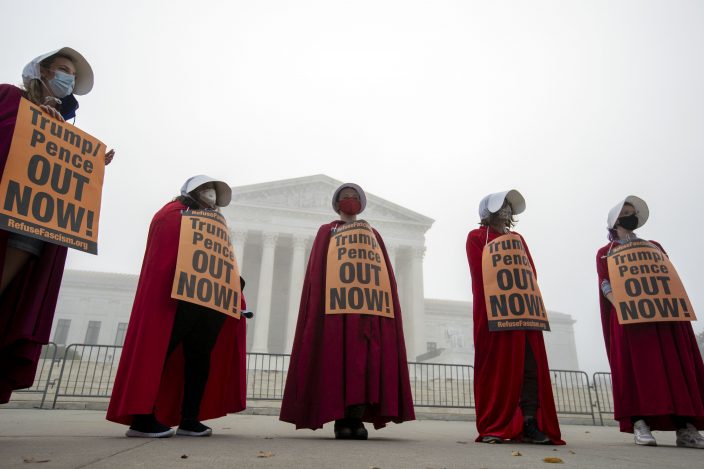 MAKING THEIR CASE: Trump and Biden fought over how to tame the raging coronavirus in the final 2020 debate. They largely shelved the rancor that overshadowed their previous faceoff in favor of a more substantive exchange that highlighted their vastly different approaches to solving the major domestic and foreign policy challenges facing the nation. Trump sought to portray himself Thursday as the same outsider he first pitched to voters four years ago. Biden, meanwhile, argued that Trump was an incompetent leader of a country facing multiple crises.

RUSSIAN MEDDLING: Russian hackers have targeted the networks of dozens of state and local governments in the U.S. in recent days and have stolen data from at least two servers, federal officials say. The warning, less than two weeks before the election, amplified fears of the potential for tampering with the vote and undermining confidence in the results.

INTERLUDE OF NORMALCY: The second and final presidential debate, it turns out, was actually a debate — and a reprieve for voters turned off by the candidates’ noxious first faceoff. There were heated clashes but far fewer of the angry interruptions and crosstalk that made the opening debate nearly unwatchable. A mute button mandated by the debate commission helped enforce decorum.

CHINA'S HOPES: Chinese leaders hope Washington will tone down conflicts over trade, technology and security if Biden wins the presidential election. But any shift is likely to be limited as frustration with Beijing grows across the American political spectrum. Both political parties agree on criticism of Beijing’s trade record and stance toward Hong Kong, Taiwan and religious and ethnic minorities in Tibet and Xinjiang, where the ruling Communist Party has detained Muslims in political re-education camps.

BALLOT SURVEILLANCE: The Trump campaign has been videotaping people as they deposit ballots in drop boxes in Philadelphia in what it says is an attempt to catch violations. It's surveillance that the battleground state’s Democratic attorney general suggested could amount to illegal intimidation. The Trump campaign acknowledged the taping in a letter from a lawyer that complained it had caught voters on video illegally depositing multiple ballots. City elections officials responded they could not confirm the activity was inappropriate under Pennsylvania law.

QUOTABLE: “Anyone who’s responsible for that many deaths should not remain as president of the United States. I will end this. I will make sure we have a plan.” — Biden on his strategy for combating the coronavirus pandemic.

Make a pizza Margherita like an Italian. Here's ho ...

The Margherita is the undisputed h ...