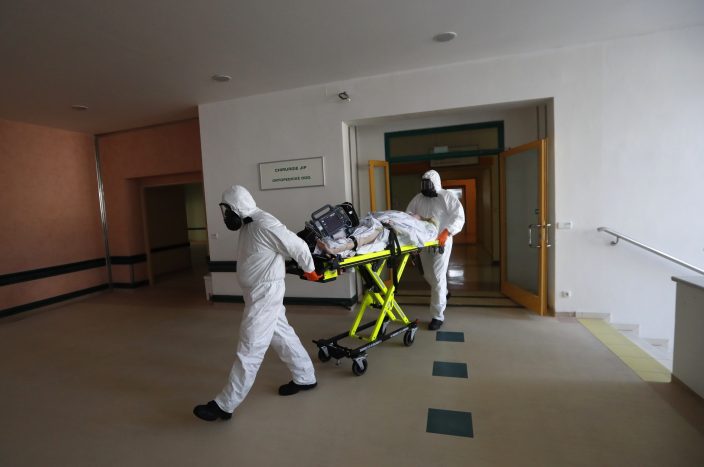 Health care workers transport a COVID-19 patient from an intensive care unit (ICU) at a hospital in Kyjov to a hospital in Brno, Czech Republic, Thursday, Oct. 22, 2020. Coronavirus infections in the Czech Republic are on a steep rise, setting a new record high for the second straight day. About 4,500 COVID-19 patients have filled up the country's hospital with the government expected the health system will be overwhelmed by Nov 11 if the surge doesn't slow. (AP PhotoPetr David Josek)

ELECTION 2020-DEBATE — President Donald Trump and Democratic challenger Joe Biden scrap over how to tame the raging coronavirus in their final 2020 debate. Trump sought to portray himself as the same outsider he first pitched to voters four years ago, while Biden argued that Trump was an incompetent leader of a country facing multiple crises. By Jonathan Lemire, Darlene Superville, Will Weissert and Michelle L. Price. SENT: 1,270 words, photos, video. Also see MORE ON DEBATE/POLITICS below.

ELECTION 2020-DEBATE-ANALYSIS — The second and final presidential debate, it turns out, was actually a debate — a brief interlude of normalcy in an otherwise highly abnormal year. There were heated clashes between Trump and Biden, but far fewer of the angry interruptions and crosstalk that made the opening debate nearly unwatchable. An AP News Analysis by Washington Bureau Chief Julie Pace. SENT: 870 words, photos. 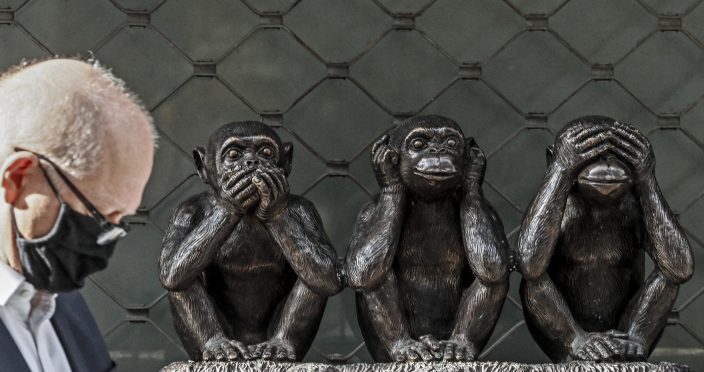 UN-LIBYA-CEASEFIRE —The United Nations say the two sides in Libyan military talks reached a “historic achievement” with a permanent cease-fire agreement across the war-torn North African country. After mediation this week led by U.N. envoy for Libya Stephanie Turco Williams, the 5+5 Joint Military Commission reached what the U.N. called an “important turning point towards peace and stability in Libya.” SENT: 540 words, photos.

IRAQ-TROUBLED ECONOMY — Iraq’s government is struggling to pay the salaries of its public sector employees, its coffers drained because of this year’s plunge in oil prices. By Samya Kullab. SENT: 1,070 words, photos.

RACIAL-INJUSTICE-MAYFLOWER-LEGACY — Four centuries after white Europeans stepped off the Mayflower and onto America’s shores, some descendants of the colonists are wrestling with the complicated legacy of their ancestors amid a global racial reckoning. For some, the devastating impact that the Pilgrims’ landing in New England had on Native Americans weighs heavily in this moment of unrest over systemic racism. By David Goldman and Alanna Durkin Richer. SENT: 940 words, photos.

ELECTION-2020-DEBATE-FACT CHECK — The facts took a hit as Trump and Biden exchanged a torrent of claims in their last presidential debate. SENT: 1,670 words, photos, videos.

ELECTION-2020-DEBATE-SCENE — After a raucous first debate led organizers to introduce a mute button, the second and final meeting between Trump and Biden was a downright civil affair. SENT: 850 words, photos.

ELECTION 2020-DEBATE-OIL INDUSTRY — Biden’s remarks that he will transition away from the oil industry in favor of renewable energy sources have drawn quick attention from Trump. SENT: 770 words, photos.

CALIFORNIA-RIDE-HAILING-LAWSUIT — A California appeals court has upheld an order requiring Uber and Lyft to treat their California drivers as employees instead of independent contractors, less than two weeks before voters will be asked to exempt the ride-hailing giants from the state’s gig economy law. SENT: 410 words, photo.

MISSING PAINTING FOUND — A painting by American artist Jacob Lawrence that has not been seen in public for 60 years has been found and is taking its designated place in a 30-piece exhibit of Lawrence’s work. SENT: 470 words.

VIRUS OUTBREAK-ONE-GOOD-THING-LONELY JAPAN — Suicides are on the rise among Japanese teens and that worries 21-year-old Koki Ozora, whose nonprofit offers a 24-hour text-messaging service for those seeking a sympathetic ear. SENT: 620 words, photos.

VIRUS OUTBREAK-THAILAND — Health officials in Thailand say a French woman on the resort island of Samui has tested positive for the coronavirus and probably acquired it after arriving in Thailand in what could be one of few cases of local transmission. SENT: 340 words.

VIRUS-OUTBREAK-BELGIUM — Belgian Prime Minister Alexander De Croo has stopped short of imposing another full lockdown, as the country did in March, but has introduced a series of new restrictive measures as the number of COVID-19-related hospital admissions and deaths continues to soar. SENT: 490 words, photos.

VIRUS OUTBREAK-DRUG — U.S. regulators have approved the first drug to treat COVID-19: remdesivir, an antiviral medicine given to hospitalized patients through an IV. SENT: 450 words, photos.

VIRUS OUTBREAK-IDAHO — Members of an Idaho health department board have voted to repeal a local mask mandate despite hearing a hospital was overwhelmed by COVID-19 patients. SENT: 740 words, photos.

VIRUS-OUTBREAK-UN-G20-TACKLING-COVID-19 — The U.N. chief says it’s “very frustrating” that leaders of the 20 major industrialized nations didn’t come together in March and establish a coordinated response to suppress the coronavirus in all countries as he proposed. SENT: 580 words, photos.

NIGERIA-POLICE-PROTESTS — Nigerian President Muhammadu Buhari has spoken to the nation about the unrest that has gripped the country in recent days but without mentioning the shootings of peaceful protesters at Lekki toll plaza on Tuesday night that prompted international outrage. SENT: 1,340 words, photos.

CHINA-US-NORTH KOREA — Chinese leader Xi Jinping has condemned what he called unilateralism, protectionism and extreme egoism in a jab at the United States made during a rally to mark the 70th anniversary of China’s entry into the 1950-53 Korean War. SENT: 670 words, photos.

EU-BREXIT-AP-EXPLAINS — More than four years after Britain voted to leave the European Union, the two sides are still arguing over their post-Brexit relations. SENT: 1,010 words, photos.

CHINA-BRITAIN-HONG KONG — China’s foreign ministry says it may not recognize British-issued passports for Hong Kong residents in retaliation for London’s moves to open a path to citizenship for those holding the documents. SENT: 340 words, photo.

AUSTRALIA-VATICAN SCANDAL — Australian state police say they’re not investigating a transfer of money from the Vatican to Australia, throwing doubt on Italian media speculation that it might be linked to the overturned convictions of Cardinal George Pell for child sex abuse. SENT: 520 words, photos.

GREECE-GOLDEN DAWN — Greek authorities are hunting for one of the leading members and former lawmakers of the extreme right-wing Golden Dawn party after he refused to turn himself in following a court decision ordering his imprisonment. SENT: 370 words, photos.

GERMANY-NAZI-AUCTION — Handwritten speech notes by Nazi dictator Adolf Hitler have been sold at auction in Munich despite concerns from Jewish groups they could encourage neo-Nazis. SENT: 100 words.

2020-CENSUS — From tribal lands in the Southwest to storm-battered Louisiana, the U.S. Census Bureau did not achieve its goal of reaching 99% of households during the 2020 census. SENT: 1,040 words, photos.

IMMIGRATION-SEPARATED FAMILIES — A federal judge is urging the Trump administration to do more to help court-appointed researchers find hundreds of parents who are still separated from their children three years after they crossed the U.S.-Mexico border. SENT: 600 words, photos.

WESTERN-WILDFIRES-COLORADO — In parts of Colorado, the sky has been gray, the sun hazy and the odor of a burning campfire has persisted for much of September and October. SENT: 950 words, photos.

TROPICAL-WEATHER — A weakened Hurricane Epsilon is moving northward over the Atlantic Ocean, a day after after skirting well east of Bermuda. SENT: 250 words, photo.

BOOGALOO MARTYR — Duncan Socrates Lemp became a martyr for an anti-government movement after a police officer shot and killed the 21-year-old man during a pre-dawn raid on his family’s Maryland home in March. SENT: 1,040 words, photos.

TULSA-MASSACRE-MASS-GRAVES — The search for remains of the 1921 Tulsa Race Massacre victims has revealed another body in an unmarked mass grave at a Tulsa cemetery. SENT: 470 words, photos.

JAPAN-BRITAIN — Japan and Britain have signed a free trade deal in the first such major post-Brexit deal. SENT: 370 words, photos.

CHINA-HUAWEI — Chinese tech giant Huawei says its revenue rose 9.9% in the first nine months of this year, but growth slowed due to U.S. sanctions and the coronavirus pandemic. SENT: 390 words, photos.

WALMART-OPIOID LAWSUIT — Walmart is suing the U.S. government in a pre-emptive strike in the battle over its responsibility in the opioid abuse crisis. SENT: 520 words, photos.

FINANCIAL-MARKETS — World shares and U.S. futures have advanced after Trump and Biden faced off in their second and final debate before the Nov. 3 election. SENT: 730 words, photos.

FRANCE-BITCOIN FRAUD — A court in Paris is wrapping up a trial against Alexander Vinnik, who is accused of using software attacks in a 135 million-euro ($160 million) fraud using the cryptocurrency bitcoin. SENT: 270 words, photos.

ELECTION-2020-DEBATE-MEDIA — Moderator Kristen Welker, with the help of an offstage mute button, helped give Americans a substantive head-to-head debate over leadership that had been missing during the presidential campaign. SENT: 630 words, photos.

MICHAEL JACKSON-ACCUSER LAWSUIT — A Los Angeles judge has dismissed the lawsuit of one of two men who alleged that Michael Jackson abused them as boys in the documentary “Leaving Neverland.” SENT: 270 words.

TEXAS-SCHOOL SONG-ANALYSIS — A controversy over “The Eyes of Texas”, a song that has links to the racist minstrel shows of yesteryear, has lingered for weeks now at the University of Texas. By Sports Writer Jim Vertuno. SENT: 1,000 words, photos.

A doctor for imprisoned Russian op ...

President Joe Biden has taken his ...