Pro Football Hall of Famer Lawrence Taylor has teamed with DonateAToy.org for his own charity, Fore Life, Inc., a Florida-based not-for-profit organization that uses the game of golf and its character-building skills to empower vulnerable youth to help them survive and succeed.

“When the pandemic forced us to cancel our 12th Annual LT Throwback Celebrity Golf Weekend event, we needed to find another way to raise funds to support the at-risk youth we serve,” Taylor says. “I encourage everyone to visit the DonateAToy.org website or ForeLifeInc.org website to learn more or to donate a gift to a child who needs it most during this holiday season.”

DonateAToy.org, part of Fun Services, has been a leader in New Jersey school fundraising programs and events since 1968. It has teamed with Toys for Tots, a 73-year national charitable program led by the U.S. Marine Corps Reserve, to launch a Virtual Holiday Toy Drive to accommodate the latest COVID-19 health and safety guidelines of donating during this year’s holiday season. 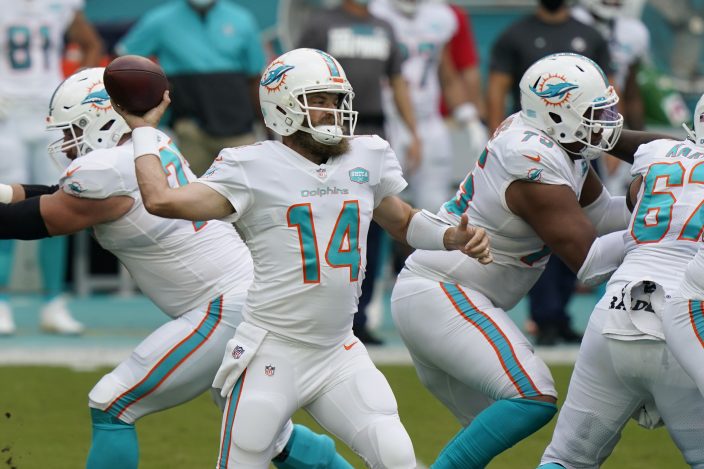 Miami Dolphins quarterback Ryan Fitzpatrick (14) looks to pass the ball during the first half of an NFL football game against the New York Jets, Sunday, Oct. 18, 2020, in Miami Gardens, Fla. (AP PhotoLynne Sladky)

The new DonateAToy.org website provides a contact-free online platform to quickly and easily donate toys to thousands of disadvantaged children nationwide in place of traditional, in-person toy drives. DonateAToy.org has committed $100,000 worth of toys to Toys for Tots. The company will match every purchase and cash donation made through the platform with a toy of equal value through the end of the year.

“As the coronavirus pandemic has increased need to unprecedented levels, we are honored to support the crucial Toys for Tots mission,” said Anthony Lombardi, president of Fun Services and founder of DonateAToy. “With people reluctant to visit physical drop-off sites, this unique program empowers both corporate gift-giving and consumer donations to brighten the holidays for less fortunate children across the country, right from their computer or mobile device.” 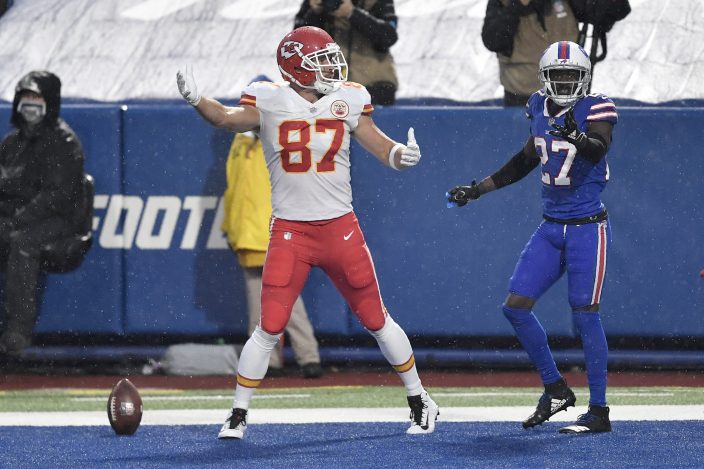 Travis Kelce is putting his experience on the TV screen to good use in a way unlike any before.

The Kansas City Chiefs tight end, who starred on his own reality dating show a few years ago, will have a guest role in a new Showtime comedy series called MOONBASE 8. The six-episode series about three subpar astronauts living in a remote NASA moon base simulator stars Fred Armisen, John C. Reilly and Tim Heidecker.

Kelce certainly has some energy in front of cameras. Whether it’s his touchdown dances on the field or his ability to light up a crowd during the Chiefs’ Super Bowl celebration in February, he always seems to find the spotlight.

He also has a goofball streak. His quarterback, Patrick Mahomes, was asked recently about who he would want to babysit his baby girl, which is due this spring. “I can’t let Trav or anybody like that do it,” Mahomes replied. “I mean, we never know what could happen!”

Washington coach Ron Rivera and his wife donated $500,000 to his alma mater California for a new softball facility that will be named the “Rivera Family Cal Softball Field.”

Rivera was a star linebacker at Cal from 1980-83 and Stefanie played women’s basketball at the school from 1983-85. The two met at a frozen yogurt shop near campus when both were students and visit it whenever they return to Berkeley.

The Riveras had previously established a scholarship for the football program in 2002 and try to attend as many games as they can in any sport.

The gift is part of Cal’s gender equity campaign to raise funds for new facilities for softball and beach volleyball.

Cal softball coach Chelsea Spencer has a long relationship with the Riveras. They asked her years ago to help run a softball camp that their daughter, Courtney, attended. Courtney went on to play at UCLA.

“They brought us to their house and inside their family,” Spencer said. “It meant a lot. We kept that connection throughout the years. The passion that the Rivera family has for Cal Athletics is unmatched. For Cal softball, it’s a dream come true for this process to continue with the Rivera family. We’re very fortunate to have them behind us.”

An anonymous donor also offered to match up to $500,000 for the project.

Ryan Fitzpatrick’s dismay about losing his job as the Miami Dolphins’ starting quarterback was compounded by how quickly the news spread.

“My two boys in middle school, they don’t get to find out from Dad,” Fitzpatrick said. “They get to find out through a friend that got a text message. So that part of it is just the world we live in now.”

Coach Brian Flores, who told Fitzpatrick he was promoting Tua Tagovailoa to the starting job, was also annoyed the news leaked Tuesday before he could tell the entire team.

Fitzpatrick said his boys didn’t take the news too hard.

“They probably dropped me from their fantasy teams,” he said, “but other than that they still love me.”