The reason: States in many traditionally conservative areas are in play next month and both sides know it.

Less than two weeks from an Election Day that will determine Senate control, each party is throwing late money at an up-for-grabs Democratic seat in Michigan. The Senate Majority PAC, a political committee aligned with the chamber's Democratic leaders, has canceled its remaining $1.2 million in spending against GOP Sen. Cory Gardner in Colorado, sensing victory. National Democrats have reported no significant expenditures yet to protect Sen. Doug Jones, who seems likely to lose his seat in crimson Alabama.

FILE - In this Monday, June 22, 2020, file photo, Republican U.S. Senate candidate John James speaks at Weir Farms in Hanover Township, Mich. First-term Democratic Sen. Gary Peters of Michigan is trying to hang onto his seat. The low-key, understated, maybe even “boring” senator is betting voters care more about his effectiveness as he desperately fights to keep a seat his party is counting on to take the Senate majority. Peters is finding it tougher to shake Republican John James. Michigan has something it has not seen in 20 years: a competitive Senate contest. (AP PhotoDavid Eggert, File)

The most striking feature of the campaign's waning days is how both parties are focusing resources on seats in territory that's usually solidly Republican. The spending underscores the broad map the GOP must defend, often in unlikely places, as it struggles to retain its current 53-47 chamber majority.

“I mean, Kansas?" said GOP consultant David Flaherty, citing a state that last elected a Democratic senator in 1932. “We're in what looks like could be a wave election."

The late maneuvering comes despite a political climate that seems to have only hardened in recent months. President Donald Trump's deep unpopularity with moderate and educated voters, particularly in suburbs, is hurting down-ballot GOP candidates as well. 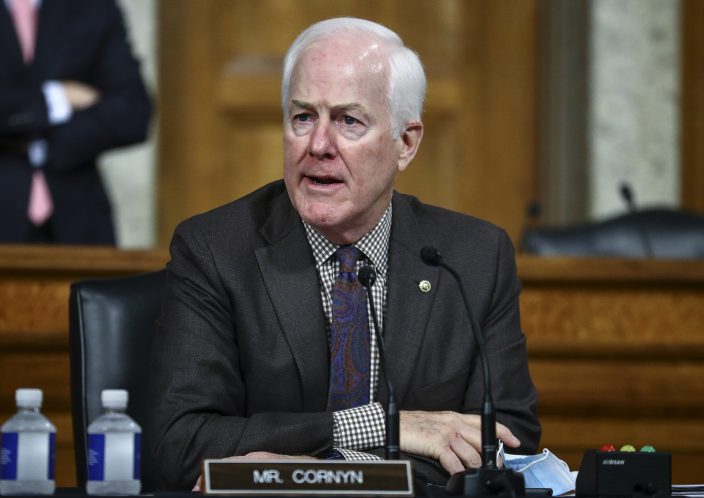 Sen. John Cornyn, R-Texas, attends a Senate Judiciary Committee meeting on the nomination of Judge Amy Coney Barrett to be an associate justice of the U.S. Supreme Court, Thursday, Oct. 22, 2020 on Capitol Hill in Washington. (Hannah McKayPool via AP)

In addition, Democrat candidates have significantly outraised their Republican rivals in all but three of the 15 most competitive Senate races, most of which pit GOP incumbents against Democratic challengers. That's freed national Democrats to aim last-minute money at longer-shot races than usual, in turn forcing Republicans to spend resources defending those seats.

“Close races and a chance to win,” J.B. Poersch, president of Senate Majority PAC, said of how his group decides to allocate money over the campaign’s dwindling days.

Easing the disparity a bit, Poersch's group has been outraised 2-1 by its GOP counterpart, the Senate Leadership Fund. The Republican committee, with ties to Senate GOP leaders, reported mammoth donations last month of $60 million from Sheldon and Miriam Adelson and $20 million from Kenneth Griffin, billionaire donors. 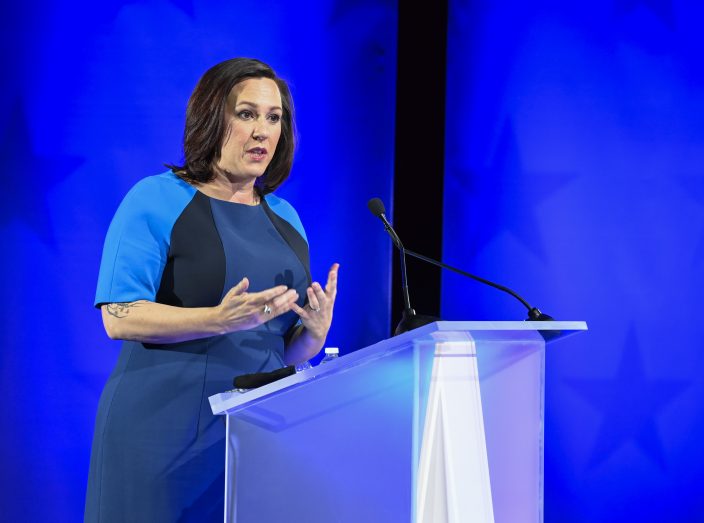 The figures are from the ad-tracking firm Kantar/CMAG.

“It's indicative of where we are. He's getting outspent 3-1,” said GOP Sen. Pat Roberts, whose retirement is making the seat available.

“Liberal Barbara Bollier stands with them, not Kansas," says the announcer in one National Republican Senatorial Committee TV spot that accuses her of backing “far-left Democrats" who want to pack the Supreme Court with additional justices.

Bollier has said the proposal “is not on my plate." The committee is the Senate GOP's political arm.

Over the same period, Democratic groups have launched ads against GOP senators including about $14 million aimed at Texas' Cornyn; $3.5 million against Maine Sen. Susan Collins; over $2 million against Montana's Daines and over $1 million against Ernst of Iowa, according to Kantar/CMAG.

This week alone, Future Forward has spent $4 million against Cornyn, according to reports the group has filed with the Federal Election Commission. The well-funded political action committee, which gets much of its war chest from high technology entrepreneurs, is using most of its money to oppose Trump.

“It’s just a very difficult environment,” said Cornyn. The Texan won his last reelection by 27 percentage points in 2014 and Trump carried the state in 2016 by 9 points.

Besides Alabama, Michigan is the GOP's best chance at gaining a seat and thwarting Democrats' drive to a Senate majority. Over the past few days, Democrats' Senate Majority PAC has steered $3.7 million to help incumbent Sen. Gary Peters, while the GOP senatorial committee has spent $1.1 million.

The late spending reflects a bipartisan consensus that even in a campaign notable for a low proportion of undecided voters, it makes sense to make last-ditch adjustments in where resources are going.

“It's a little different this year," said GOP pollster Jon McHenry, citing a torrent of early voting prompted by the coronavirus pandemic and efforts by the two parties, chiefly Democrats, to avoid potential Election Day problems. Over 46 million people have already voted, according to data gathered by The Associated Press.

McHenry said that even so, “It's still important to appeal to independents who haven't decided yet and to Republicans trying to push their side to turn out."

“It matters," agreed Poersch of Democrats' Senate Majority PAC, citing a shift in voters' sentiment over the final weeks of the 2016 campaign that helped Trump edge to victory. “It’s a folly to assume these races won’t be competitive right through Election Day.”

December wholesale prices up 0.3% with sharp jump in en ...