The world premiere of a documentary on Pope Francis was supposed to have been a bright spot for a papacy locked down by pandemic and besieged by a corruption scandal, recalling Francis’ glory days travelling the world to bless the oppressed.

But the red carpet rollout of “Francesco” has been anything but bright, with evidence that the Vatican censored the pope last year by deleting his endorsement of same-sex civil unions from an interview, only to have the footage resurface in the documentary.

Aside from the firestorm the remarks created, the fiasco once again has put the spotlight on the Vatican’s often self-inflicted communications wounds and Francis’ willingness to push his own agenda, even at the expense of pushback from conservatives. 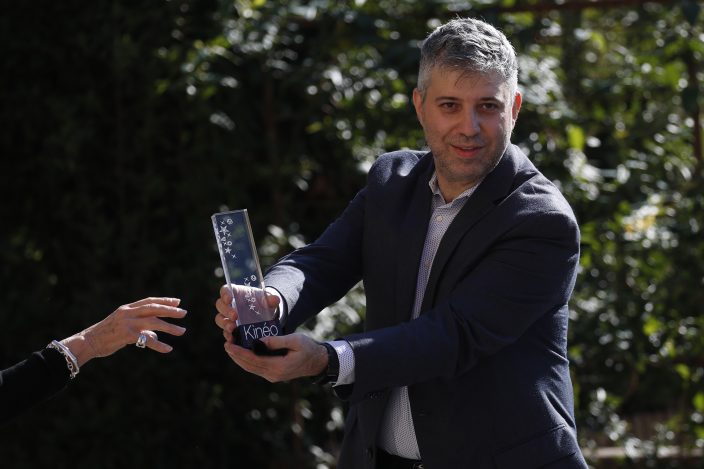 That pushback was swift and came from predictable corners: Cardinal Raymond Burke, Francis’ frequent nemesis on matters of doctrine, said the pope’s comments were devoid of any “magisterial weight.” But in a statement, Burke expressed concern that such personal opinions coming from the pope “generate great bewilderment and cause confusion and error among Catholic faithful.”

The kerfuffle began Wednesday with the world premiere of “Francesco,” a feature-length film on Francis and the issues he cares most about: climate change, refugees and social inequality. Midway through, Francis delivers the bombshell quote that gays deserve to be part of the family and that he supported civil unions, or a “ley de convivencia civil” as he said in Spanish — to give them legal protections.

Christopher Lamb of Britain’s The Tablet magazine, noted Friday that in some countries, the rights of gays are a life and death matter, and that Francis was merely positioning the church to defend LGBT Catholics from perhaps deadly discrimination. 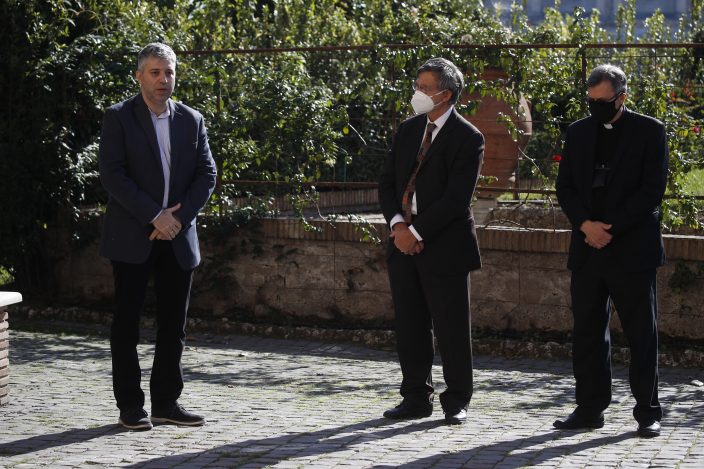 From left, director Evgeny Afineevsky, Paolo Ruffini, prefect of the dicastery of Communication, and Monsignor Ruiz, secretary of the dicastery, pose for a photo respecting the social distancing during the Kineo Movie for Humanity award ceremony at the Vatican, Thursday, Oct. 22, 2020. Director Evgeny Afineevsky was awarded with Kineo prize Thursday for the movie "Francesco". (AP PhotoAlessandra Tarantino)

“The pope is willing to ‘break a few plates’ to ensure he communicates this Gospel-based message of compassion,” he tweeted.

But the contents of the pope’s words were almost lost in the controversy that ensued over their origin.

At first, film director Evgeny Afineevsky claimed Francis made them directly to him. Then one of Francis’ media advisers said they came from a 2019 interview with Mexican broadcaster Televisa, and were old news as a result. 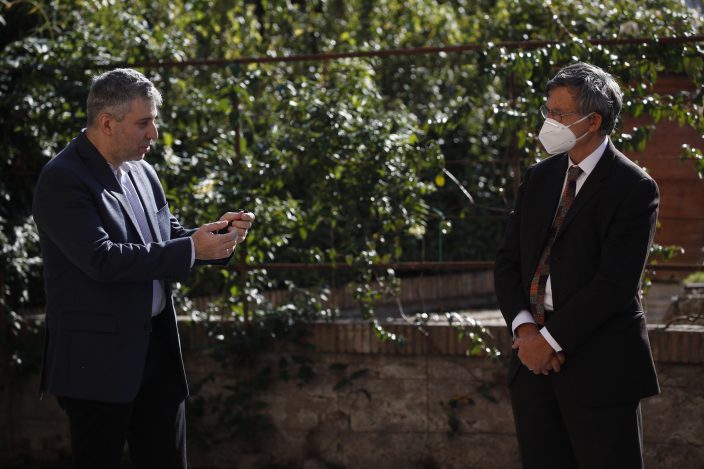 Televisa confirmed the origin of the quotes, but said they never aired. A source in Mexico said the Vatican, which used its own cameras to shoot the interview and provided raw footage to Televisa afterward, had deleted the civil union quote in question. The source spoke on condition of anonymity because he was not authorized to speak to the press.

The Vatican has refused to comment and imposed something of a media blackout on the matter. None of the Vatican’s in-house media has reported on the cut quote, and on Friday the Il Fatto Quotidiano daily quoted an email from a staffer in the Vatican’s communications ministry to other staff saying there wouldn’t be any comment, but that “talks are underway to deal with the current media crisis.”

It wasn’t the first time that the Vatican’s communications office has gone into crisis over apparently manipulated images. In 2018, Francis fired the first head of the office, Monsignor Dario Vigano, after he mischaracterized a private letter from retired Pope Benedict XVI, then had a photo of it digitally manipulated and sent out to the media. 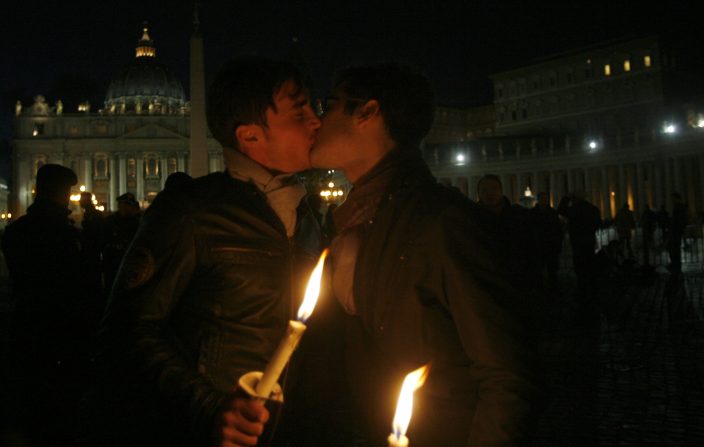 FILE - In this Saturday Dec. 6, 2008 file photo two men kiss each other outside St. Peter's Square at the Vatican during a candle-lit demonstration for gay rights. Pope Francis endorsed same-sex civil unions for the first time as pope while being interviewed for the feature-length documentary "Francesco," which premiered Wednesday, Oct. 21 2020 at the Rome Film Festival. (AP PhotoAlessandra Tarantino, File)

In both cases, journalists, who must play by Vatican rules in accepting handout footage of events covered exclusively by Vatican cameras, were misled into assuming the Holy See would abide by traditional journalistic ethics and provide them with unaltered images.

Coincidentally, it was Vigano who first entertained a pitch for a documentary on Francis by Afineevsky, who was nominated for an Oscar for his 2015 documentary “Winter on Fire: Ukraine’s Fight for Freedom,” which opened the Venice Film Festival that year.

In an Oct. 14 interview with The Associated Press, Afineevsky said he had asked the head of the Venice festival, Alberto Barbera, to help him make inroads with the Vatican, and that Barbera had provided an email of introduction to Vigano in late 2017. 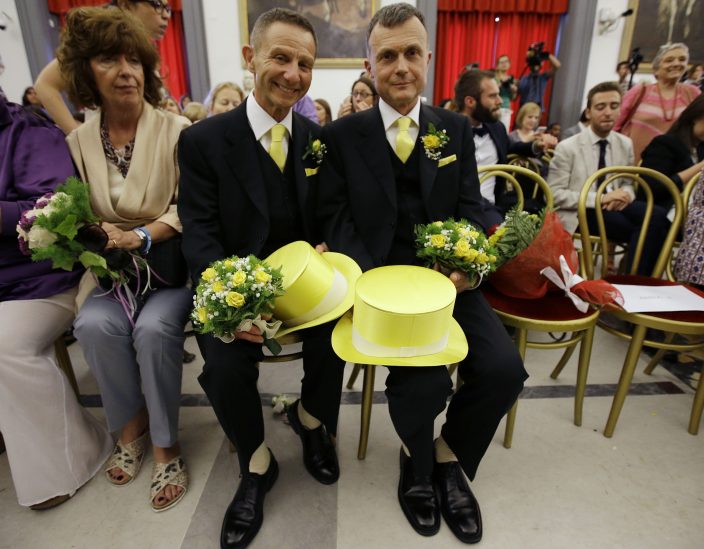 FILE - In this May 21, 2015 file photo, Angelo Albanesi, left, and Pier Giorgio De Simone wait for their civil union to be registered by a municipality officer during a ceremony in Rome's Campidoglio Capitol Hill. Pope Francis endorsed same-sex civil unions for the first time as pope while being interviewed for the feature-length documentary “Francesco,” which premiered Wednesday, Oct. 21, 2020 at the Rome Film Festival. (AP PhotoGregorio Borgia, file)

Afineevsky said Vigano, a known movie buff, was already familiar with his work and was open to the idea.

“But he said, ‘Go. Start. Do it. I’m not promising you anything. We will see,’” Afineevsky said.

After Vigano was ousted, his replacement, Paolo Ruffini, kept the line of communications open, as well as the doors to the Vatican television archives.

Afineevsky had free range, and used them to tell the heart-lifting story of Francis’ seven-year papacy, largely through the eyes of the people he impacted. Coming out in the midst of a Vatican corruption scandal dominating Italian headlines for months, the film provided a nostalgic profile of a once globe-trotting papacy that in some ways ended with COVID-19.

About midway through the film, Afineevsky recounts the story of Andrea Rubera, a married gay Catholic who wrote Francis asking for his advice about bringing into the church his three young children with his husband.

It was an anguished question, given the Catholic Church teaches that gay people must be treated with dignity and respect but that homosexual acts are “intrinsically disordered.” The church also holds that marriage is an indissoluble union between man and woman, and that as a result, gay marriage is unacceptable.

In the end, Rubera recounts how Francis urged him to approach his parish transparently and bring the children up in the faith, which he did. After the anecdote ends, the film cuts to Francis’ civil union comments in the Televisa interview.

While it wasn’t clear in the documentary, Francis was merely recounting his position when he was archbishop of Buenos Aires: Then, the former Cardinal Jorge Mario Bergoglio endorsed extending legal civil union protections to gay couples as an alternative to moves to approve same-sex marriage, which he firmly opposed.

As Francis’ biographer Austen Ivereigh recounts in “The Great Reformer,” Bergoglio had ministered to many gay Catholics in Argentina. “He knew their stories of rejection by their families,” Ivereigh wrote, and told gay activists that “he favored gay rights as well as legal recognition for civil unions, which gay couples could also access.”

The hitch for the pope is a 2003 document from the Vatican’s doctrine office, which states the church’s respect for gay people “cannot lead in any way to approval of homosexual behavior or to legal recognition of homosexual unions.”

That document was issued after Rome criticized Bergoglio for refusing to speak up strongly when Buenos Aires extended civil union protections to gay couples within the capital region in 2002, Ivereigh wrote.

As pope, Francis had never come out publicly in favor of legal protections for civil unions, and no pontiff before him had, either.

In fact the closest Francis had come before — a 2014 interview with Corriere della Sera in which he spoke in general terms about the need to evaluate such legislation — was followed by a clarification the next day by a Vatican media liaison.

The Rev. James Martin, one of the leading priestly advocates for LGBT Catholics, said the controversy over the pope’s comments would in the end be helpful.

“The intrigue over the video’s origin, and the explosive reaction to the pope’s ongoing support for LGBT people, make the pope’s words look more dangerous, and therefore more powerful,” he said.