The Senate is gearing up for rare weekend session as Republicans race to put Amy Coney Barrett on the Supreme Court and cement a conservative majority before Election Day despite Democratic efforts to stall President Donald Trump's nominee.

Democrats used time-consuming procedural hurdles to delay the start of Friday's Senate session until midday, but the party has no realistic chance of stopping Barrett's advance in the Republican-controlled chamber. Barrett, a federal appeals court judge, is expected to be confirmed on Monday and quickly join the court.

"It’s hard to think of any nominee we’ve had in the past who is any better than this one," Senate Majority Leader Mitch McConnell, R-Ky., told Fox News late Thursday. 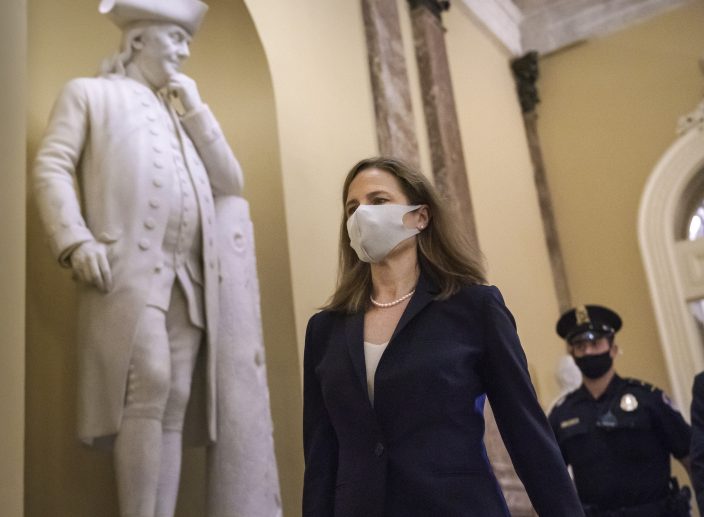 Barrett, 48, presented herself in public testimony before the Senate Judiciary Committee as a neutral arbiter of cases on abortion, the Affordable Care Act and presidential power — issues soon confronting the court. At one point she suggested, “It's not the law of Amy.”

But Barrett's past writings against abortion and a ruling on the Obama-era health care law show a deeply conservative thinker.

Trump said this week he is hopeful the Supreme Court will undo the health law when the justices take up a challenge Nov. 10, the week after the election. 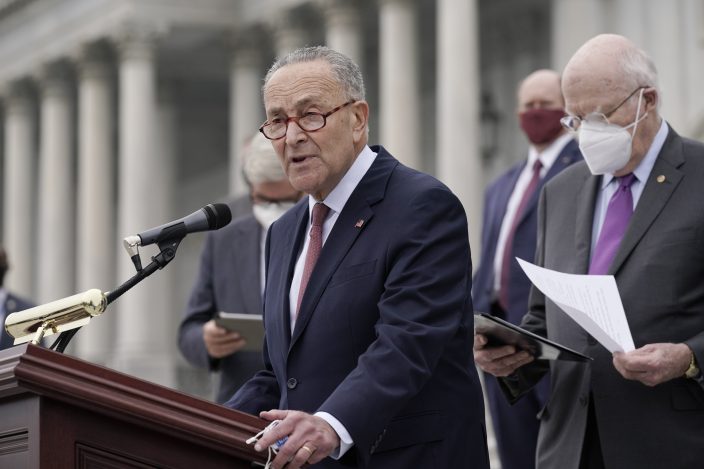 Senate Minority Leader Chuck Schumer, D-N.Y., and Democratic members of the Senate Judiciary Committee hold a news conference after boycotting the vote by the Republican-led panel to advance the nomination of Judge Amy Coney Barrett to sit on the Supreme Court, Thursday, Oct. 22, 2020, at the Capitol in Washington. (AP PhotoJ. Scott Applewhite)

The fast-track confirmation process is like none other in U.S. history so close to a presidential election.

Senate Democratic leader Chuck Schumer of New York said Friday that the Republican push to seat Barrett was "the most partisan, hypocritical, least legitimate process in the history of the nation.”

“We’re not going to have business as usual,” Schumer said as he forced one procedural vote after another.

At the start of Trump's presidency, McConnell engineered a Senate rules change to allow confirmation by a majority of the 100 senators, rather than the 60-vote threshold traditionally needed to advance high court nominees over objections. With a 53-47 GOP majority, Barrett’s confirmation is almost certain.

Republicans on the Judiciary Committee powered Barrett's nomination forward on Thursday despite a boycott of the vote by Democrats.

Sen. Lindsey Graham, the committee chairman, acknowledged the partisan nature of the proceedings, but said he could not live with himself if the Senate failed to confirm someone he said was such an exceptional nominee. Graham, R-S.C., called Barrett a “role model” for conservative women and for people strongly held religious beliefs.

Democrats decried the “sham” process and said Barrett would undo much of what was accomplished by Justice Ruth Bader Ginsburg, the liberal icon who died last month.

By pushing for Barrett's ascension so close to the Nov. 3 election, Trump and his Republican allies are counting on a campaign boost, in much the way they believe McConnell's refusal to allow the Senate to consider President Barack Obama's nominee in February 2016 created excitement for Trump among conservatives and evangelical Christians eager for the Republican president to make that nomination after Justice Antonin Scalia's death.

Graham, for example, with his high-profile role leading the hearings, has been raking about $1 million a day this month for his reelection campaign. That rate outpaces Graham’s third-quarter total of $28 million, which his campaign said represented the largest amount ever raised by any Republican Senate candidate in a single quarter, in any state.

In trying to derail or at least slow Barrett's confirmation, Democrats argue the winner of the presidential election should decide who replaces Ginsburg.

Barrett was a professor at Notre Dame Law School when she was tapped by Trump in 2017 for an appeals court opening. Two Democrats joined at that time to confirm her, but none is expected to vote for her in the days ahead.

During the three days of testimony, and subsequent filings to the Senate committee, Barrett declined to answer basic questions for senators, such as whether the president can change the date of federal elections, which is set in law. Instead, she pledged to take the cases as they come.