New Orleans Saints receiver Emmanuel Sanders has tested positive for COVID-19 and Michael Thomas remained unable to practice on Friday because of a recent hamstring injury. Neither will be able to play Sunday against Carolina.

Thomas, the 2019 AP Offensive Player of the Year after setting an NFL record with 149 catches in a season, was listed as out on the Saints' final injury report of the week. He has not played since the season opener, when he caught three passes for 17 yards before spraining his ankle when running back Latavius Murray was tackled into the back of the star receiver's lower legs.

He was on schedule to return from the ankle injury in Week 5, only to be benched because of an outburst at practice in which he punched defensive back C.J. Gardner-Johnson. His punishment was lifted during the Saints' Week 6 bye, but now he has a new lower-body injury, the severity of which Payton did not want to discuss. 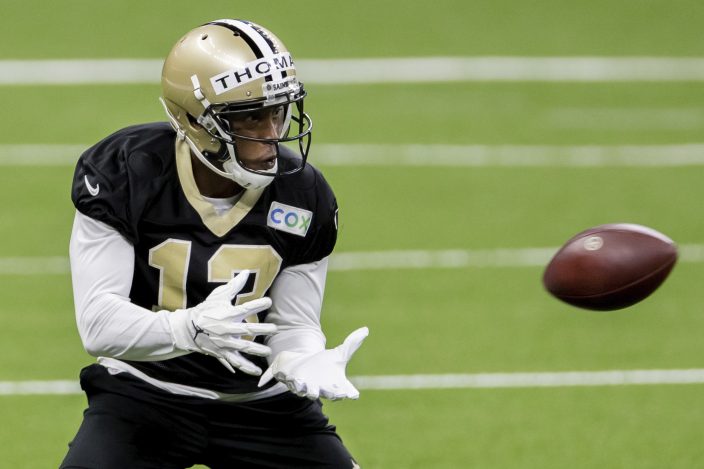 FILE - In this Saturday, Aug. 29, 2020, file photo, New Orleans Saints wide receiver Michael Thomas catches the ball during NFL football training camp in New Orleans. A person familiar with the situation says Sunday, Oct. 11, 2020, that Saints receiver Thomas has been suspended one game for conduct detrimental to the team after punching a teammate during practice. (David GrunfeldThe Advocate via AP, Pool, File)

“I'm not going to get into details but it's something he's working through and we'll leave it at that,” Payton said.

Sanders had a career-high 12 catches for 122 yards in New Orleans' last game, a 30-27 triumph over the Los Angeles Chargers in Week 5. He has caught 26 passes for 304 yards and two touchdowns this season for the Saints (3-2).

Sanders practiced on Thursday but was not feeling well afterward and was immediately tested for COVID-19.

When Sanders' test came back positive, Payton said a combination of players and coaches totaling about 20 people who might have been close to Sanders were tested and all were negative.

“Protocols have been outstanding,” Payton said, adding that Sanders "got this at home. He knows exactly how he got it and I'll leave it at that."

Despite being without arguably two of the best receivers on the club, Payton said he feels “good” about the Saints' receiver depth.

"A lot of different guys working at different positions, and we had good work today,” Payton said.