Senate Majority Leader Mitch McConnell says there’s nothing the public needs to know about his health after photos taken earlier this week captured what appeared to be bruising on his hands and around his mouth.

The Kentucky Republican, who is up for reelection this year, said “of course not” when asked by reporters Thursday if he has a health issue. In a brief exchange in a Senate hallway, McConnell at first declined to answer when asked about his health by a Politico reporter, joking instead that he was worried about the reporter’s health.

When pressed if there was anything the public should know, McConnell replied, “Of course not.” 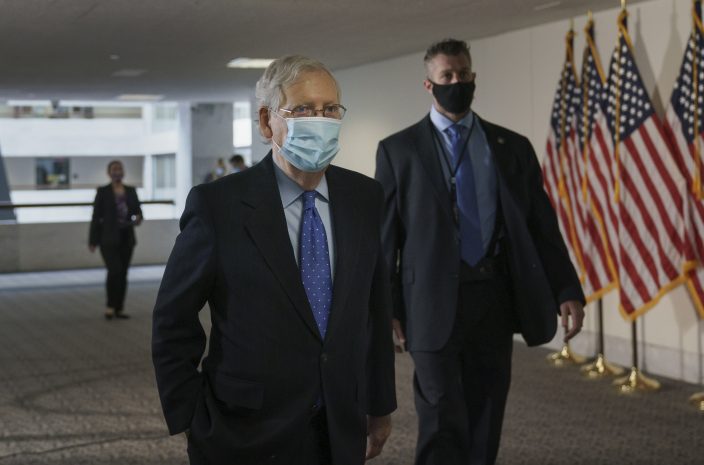 Senate Majority Leader Mitch McConnell, R-Ky., arrives for a closed-door meeting with Senate Republicans, on Capitol Hill in Washington, Friday, Oct. 23, 2020. McConnell says there’s nothing the public needs to know about his health after photos showed what appears to be bruising on his hands and around his mouth. (AP PhotoJ. Scott Applewhite)

Photos taken at a news conference Tuesday showed what appeared to be bandages and large bruises on McConnell’s hands and smaller bruises around his mouth. The photos sparked rampant speculation about his health online, particularly on social media. His office declined to comment.

The marks around his mouth were no longer visible as McConnell spoke Friday on the Senate floor about Supreme Court nominee Amy Coney Barrett.

McConnell is leading the Senate’s push to quickly confirm Barrett, scheduling proceedings over the weekend to set up a Monday evening confirmation vote. Senators will then return to their home states to campaign ahead of the election Nov. 3. 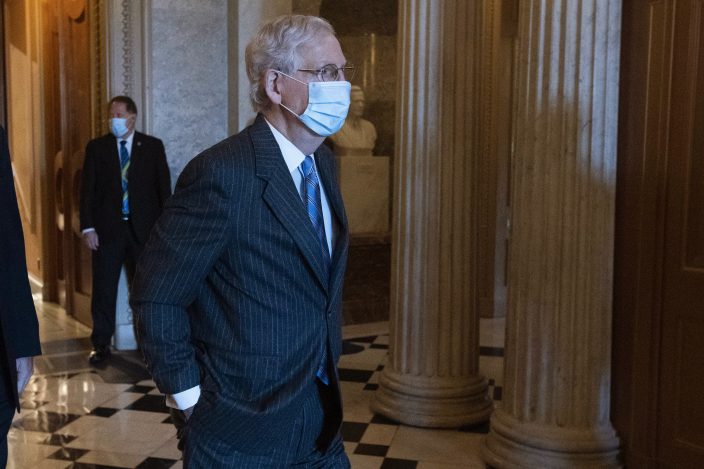 In this Oct. 22, 2020, photo, Senate Majority Leader Mitch McConnell, R-Ky., right, steps out of the Senate chamber on Capitol Hill, in Washington. McConnell says there’s nothing the public needs to know about his health after photos showed what appears to be bruising on his hands and around his mouth. (AP PhotoJose Luis Magana)

McConnell himself is on the ballot this year, facing a challenge from Democrat Amy McGrath in his quest for a seventh term. He is already the longest-serving senator in Kentucky history,

The 78-year-old McConnell survived polio as a toddler, and still has some trouble climbing stairs. Last year, he underwent successful surgery to repair a fracture in his shoulder — an injury he suffered after a fall at his Kentucky home.

Unlike his frequent ally, President Donald Trump, McConnell has frequently encouraged the public to wear masks and distance themselves from others during the coronavirus pandemic.

“The one thing we all need to do is wear a mask, practice social distancing, try to prevent the spread,” McConnell told reporters this week.

“The only thing each of us can do, until we get a vaccine, is act as responsibly as possible.”