Gus Bradley has tried to be more aggressive in his strategy as Los Angeles Chargers defensive coordinator, but it has come at a cost.

Injuries and coverage breakdowns have led to the Chargers becoming the first team in 17 years to blow 17-point leads in consecutive games. The second-half collapses and four-game losing streak have Los Angeles with a bigger chip on its shoulder going into Sunday's game against Jacksonville. 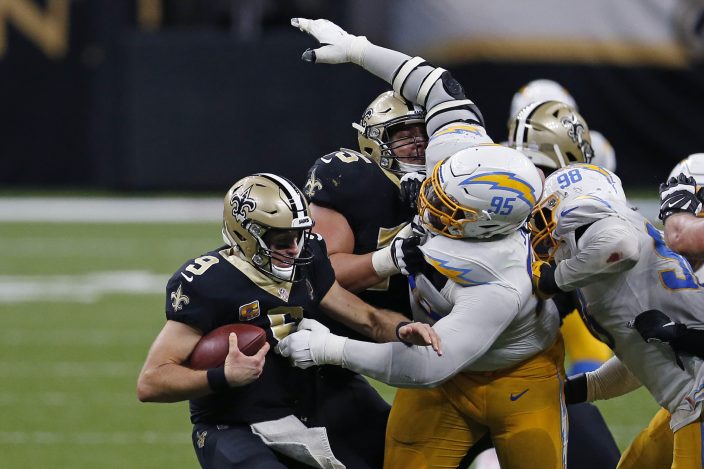 The Chargers have lost their last four by a combined 18 points, including three when they have squandered double-digit leads. The streak started with a 23-20 overtime loss to Kansas City on Sept. 20 when they had an 11-point lead in the third quarter. After a 21-16 Carolina victory the following week came the collapses at Tampa Bay (38-31) and New Orleans (30-27 in OT), where Los Angeles couldn't sustain 17-point advantages in the second quarter.

Bradley generally evaluates his unit on key areas he calls the “Sweet Six” — stopping the run, third-down stops, limiting big plays, affecting the quarterback, red-zone performance and takeaways. In those areas, the numbers lately have been sour.

Los Angeles has faced the second-least rushing attempts in the league but is giving up 4.37 yards per carry, which is 18th. The Chargers have done a good job of stopping teams on third downs in the first half, but opponents have converted 13 of 29 in the second half and 9 of 17 in the fourth quarter or overtime.

The numbers don't improve in other areas. Los Angeles' four takeovers are tied for fourth least and its eight sacks are tied for 25th. The Chargers allowed only two red-zone touchdowns in nine opportunities the first three games, but teams have scored six TDs in their last eight trips.

Those aren't good trends for a scheme that traditionally will bend but not break. But Bradley admits they are doing more with man coverages compared to the past three seasons.

“Some parts of that have been good, and then there are the other parts. Because we're doing more things you lose a little bit of precision,” Bradley said. “If we’re going to do more, like we are, then we just gotta be on the details more. On pressures, if we're going to do it we’ve got to be a little bit more precise and on it with coverage-wise principles.”

The coverage breakdowns over the past two games led to 12 plays being allowed of 10-plus rushing yards or 20-plus passing yards.

Some of the Chargers’ struggles can also be attributed to injuries to five starters. Safety Derwin James suffered a season-ending knee injury during training camp. Linebacker Drue Tanquill (leg), defensive end Melvin Ingram (knee), defensive tackle Justin Jones (shoulder) and cornerback Chris Harris Jr. (foot) are also on IR. Ingram and Jones have practiced this week and could be activated for Sunday’s game. Coach Anthony Lynn said both are likely to be game-time decisions.

While the Jaguars do come in with five straight losses, their offense still poses a difficult challenge. Gardner Minshew is equally adept running the ball as he is throwing and Jacksonville has three receivers with 25 or more receptions. Running back James Robinson is eighth in the AFC in rushing with 362 yards.

Bradley was Jacksonville's head coach for nearly four seasons (2013-16) before being fired and joining Lynn's staff in LA.

Defensive tackle Linval Joseph is optimistic that the Chargers still have time to turn things around. He relayed to the team during the bye week his experiences with the 2011 New York Giants, who also lost four straight at one point before making the playoffs and later winning Super Bowl 47.

“We’re still in a good place. Right now we’re starting to get some guys back,” he said. “I think we so far we've had a great week of preparation. We just got to get a win and just start making it a thing.”

NOTES: Offensive guard Trai Turner has been declared out for the fourth straight game due to a groin injury, but right tackle Bryan Bulaga could return after missing the past two games due to back and knee issues. Bulaga is questionable after limited participation in practice. ... Quarterback Tyrod Taylor, the starter at the beginning of the season, has been a full participant in practices all week but remains listed as questionable. Taylor suffered a rib injury in the Sept. 13 opener at Cincinnati, then punctured lung while receiving an injection before the next game against Kansas City.