In his only other start this postseason, Julio Urías had an 11-0 lead before taking the mound when the Los Angeles Dodgers blew out the Atlanta Braves in Game 3 of the NL Championship Series.

The left-hander finished that series with three perfect innings, the last two protecting a 4-3 lead in Game 7 and sending LA to the World Series against Tampa Bay.

Now comes the next start for Urías in Game 4 of the Series on Saturday night. The 24-year-old with four wins in four postseason outings this year will face another lefty who was primarily a starter in the pandemic-shortened regular season but has more postseason appearances out of the bullpen in the Rays' Ryan Yarbrough. 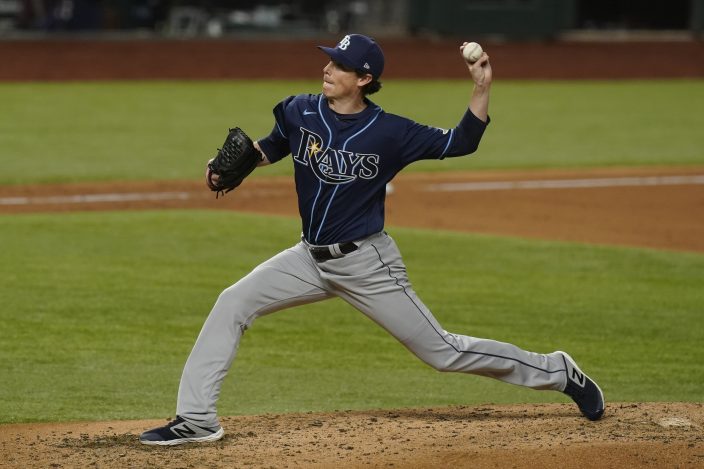 Urías has allowed just seven hits and two runs — one earned — in 16 postseason innings with three walks and 16 strikeouts. His 0.56 ERA leads the club.

“I’ve always known the potential Julio has,” catcher Austin Barnes said. “His demeanor he has, and the temperament. He’s not scared, that’s for sure. He’s making big pitches, thrown some big innings.”

The strong Game 7 showing came with closer Kenley Jansen watching from the bullpen, a move manager Dave Roberts never had to make. Urías needed 39 pitches — and no strikeouts — to finish off Atlanta. 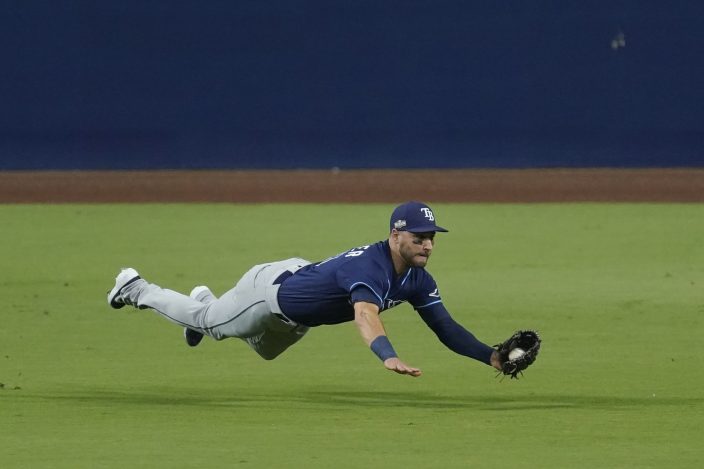 Urías also pitched three scoreless innings in his first postseason outing, a 4-2 win over Milwaukee. The next two were five innings apiece, including the 15-3 win over Atlanta when the lefty gave up his only earned run of the postseason.

“It’s the notion of going out there and thinking more like a starter,” Urías, who had 10 starts in 11 regular-season outings, said through an interpreter. “But I have experience now in both situations. I like starting. I like being in the bullpen. I’m just happy to have the opportunity and I’m ready for tomorrow.”

Nine of Yarbrough's 11 regular-season outings were starts, and he won his only postseason start in Game 3 of the ALCS against Houston on Oct. 13. Yarbrough threw 19 pitches out of the bullpen in Game 1 of the World Series. 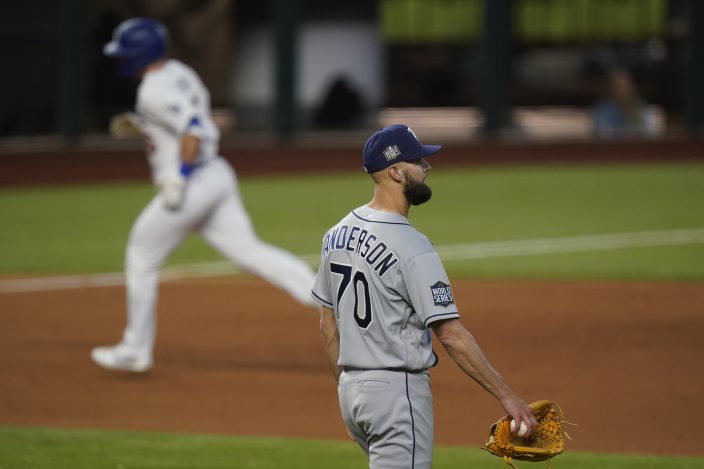 “I’m going to throw until they take the ball out of my hands,” Yarbrough said. “I haven’t done it recently, the last week or so. But I don’t think that’s going to be a factor.”

NO GOLD GLOVE FOR KK

Kevin Kiermaier knew the questions were coming, and had plenty of time to think about toning down his answers.

The Tampa Bay center fielder still didn't hold back much when asked about not being among the three finalists for the American League Gold Glove at his position. He's a three-time winner, most recently last season.

“I was disappointed,” he said. “I was upset. I feel like what I did defensively was underappreciated this year. I wasn’t flawless by any means, but I thought I was darn good out there. I’m not going to lose any sleep over it, but I’d be lying if I said I wasn’t upset about it.”

“Not even being a nominee for top three, that’s where I had to scratch my head a few times and think it over,” Kiermaier said.

Kiermaier said he found out about not being among the finalists on Twitter during the off day, and said several times he had more immediate issues at hand at the World Series.

“But next year you’ll definitely be hearing words from me that once again I have to prove to everyone out there who the best defensive center fielder in the major leagues is,” Kiermaier said. “I’m going to work my butt off this offseason and display that next season to remind everyone of just that.”

His manager won't be among those waiting for a reminder.

“As far as I’m concerned, he's the best defensive player on whatever field he’s on,” Kevin Cash said. “Those guys are really good. I saw the list of everybody. I just think KK, you know, there should be a bigger award, a higher award. He'd probably get that one.”

Cash had four outfielders a few times in the first few games, including when Will Smith hit it over all of them for a solo homer to left field off reliever Nick Anderson in Game 2.

“It's a combination of what the hitter does and what our pitchers are capable of doing,” Cash said. “And there's enough information that we trust that more times than not, this guy's going to hit the ball in the air off a specific pitcher.”

Cash also described the approach as another version of no-doubles defense, trying to cover the gaps.

“They're just playing the numbers,” Smith said. “My approach doesn't really change when that happens. I'm still trying to get a pitch I can drive. In certain situations, might try to hit more of a groundball.”

With the Rays taking over as home team in Game 3 of the neutral-site series at the home of the Texas Rangers, Tampa Bay director of game presentation and production Michael Weinman sent content to the Rangers for the video boards.

Games 3-4-5 were to have a Rays home game feel, and Weinman was to be on a headset during the game with the Rangers production team to help schedule Tampa Bay’s normal home game features.