The Michigan Public Service Commission has some authority over Enbridge's plans to build an oil pipeline tunnel beneath the channel that connects two of the Great Lakes, a state administrative law judge ruled Friday.

The agency can evaluate the need for the project and whether it would be designed, constructed and operated safely, Judge Dennis W. Mack said. But the commission should not delve into broader issues such as how the pipeline contributes to climate change, he added.

The split decision suggests the commission, which regulates public utilities such as electric power, telecommunications and natural gas services, might play a pivotal role in determining whether the project goes forward. 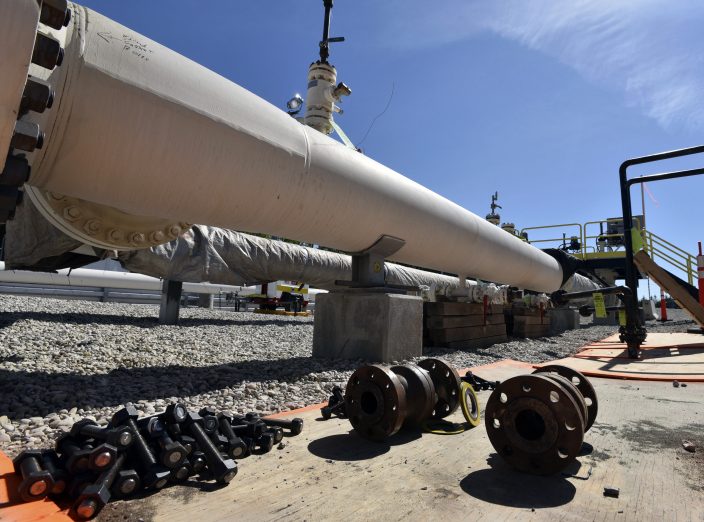 FILE - In this June 8, 2017, file photo, fresh nuts, bolts and fittings are ready to be added to the east leg of the pipeline near St. Ignace, Mich., as Enbridge prepares to test the east and west sides of the Line 5 pipeline under the Straits of Mackinac in Mackinaw City, Mich. The Michigan Public Service Commission has some authority over Enbridge's plans to build an oil pipeline tunnel beneath the channel that connects two of the Great Lakes, a state administrative law judge ruled Friday, Oct. 23, 2020. (Dale G YoungDetroit News via AP, File)

Enbridge also needs permits from the Michigan Department of Environment, Great Lakes and Energy and the U.S. Army Corps of Engineers.

“We look forward to working with the Michigan Public Service Commission as the PSC gives ample opportunity for all Michiganders to be heard — while preventing the process from being misused to promote issues unrelated to the project," company spokesman Ryan Duffy said.

Environmental groups fighting the tunnel plan praised the judge's finding that the commission could weigh the project's safety but also expressed disappointment that he limited the inquiry.

“We believe Enbridge should be held directly accountable ... for climate impacts and compliance with Michigan’s environmental laws,” said David Holtz, spokesman for Oil & Water Don't Mix. “However, Enbridge’s attempt to avoid a thorough review of its controversial proposed oil tunnel has been dealt a major setback by this ruling.”

A more than 4-mile (6.4-kilometer) section divides into two pipes that run along the bottom of the Straits of Mackinac, which links Lake Michigan and Lake Huron.

Democratic Gov. Gretchen Whitmer has joined environmentalists and native tribes in calling for shutdown of the 67-year-old line, saying the underwater segment is vulnerable to a catastrophic rupture.

Enbridge noted that it's in good condition but has proposed running a new section of pipe through a $500 million tunnel that would be drilled beneath the straits.

The public service commission has a say over the company's plan because it would need to approve relocating Line 5.

Enbridge argued that the commission's scope was limited to the pipeline itself, not the proposed tunnel, which would be overseen by the Mackinac Straits Corridor Authority, established in 2018.

But in his ruling, Mack concluded that the pipeline and tunnel were “inextricably connected."

While the commission would not decide whether to approve the tunnel, it would question whether the pipeline relocation would serve a public need, is designed and routed reasonably, and would "satisfy applicable safety and engineering standards,” he noted.

Mack agreed with Enbridge that the commission shouldn't consider whether the entire 645-mile (1,038-kilometer) pipeline needs to continue operating, as environmental groups and tribes wanted.

It's appropriate for the commission to consider whether the pipeline relocation would comply with the Michigan Environmental Policy Act, relying on state and federal agency experts, Mack said.

But he said there was no legal basis for making global warming caused by fossil fuels transported through the pipeline a factor in the commission's decision. Environmentalists said they would appeal that part of his ruling.

“There is no getting around the fact that building a new oil tunnel to operate for up to 99 years would exacerbate climate change," said Kate Madigan of the Michigan Climate Action Network.