All staff and students from two schools in northeast Melbourne have been told to immediately get tested for COVID-19 after the emergence of seven new cases on Saturday. There were no deaths.

Both schools will be closed for the next two weeks. Already about 800 residents in Melbourne’s northern suburbs have been isolating because of the school outbreak. Warnings have been circulated to workers, including taxi drivers, who might have visited the area.

The state’s death toll remained at 817 on Saturday and the national figure at 905, with only one death in the past week. 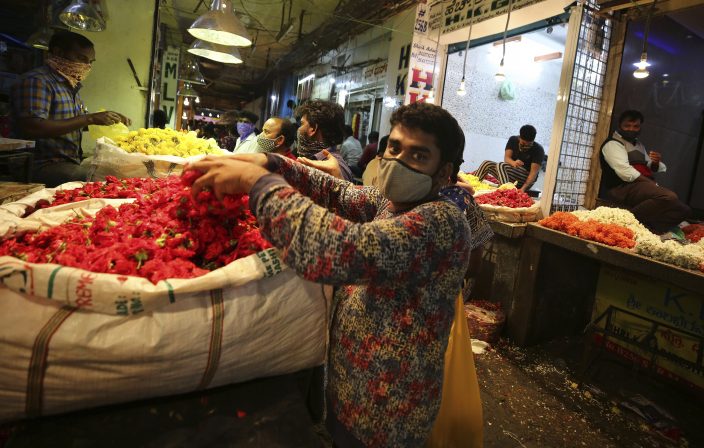 Vendors arrange flowers at a wholesale flower market ahead of the Hindu festival of Dussehra, in Bengaluru, India, Friday, Oct. 23, 2020. Health officials have warned about the potential for the coronavirus to spread during the upcoming religious festival season, which is marked by huge gatherings in temples and shopping districts. (AP PhotoAijaz Rahi)

The updated figures Saturday followed the city’s most significant anti-lockdown protest on Friday. A “Freedom Day” rally began mid-afternoon and continued for several hours, erupting at times in violent scuffles between police and demonstrators. Protesters, many of whom did not wear masks, called for an end to lockdown restrictions.

Police arrested 16 people and handed out dozens of fines for breaches of health directives, including those that make mask-wearing compulsory and limit trips to 25 kilometers (15 miles) from home.

Three police officers were injured during the protests and one was taken to a hospital. 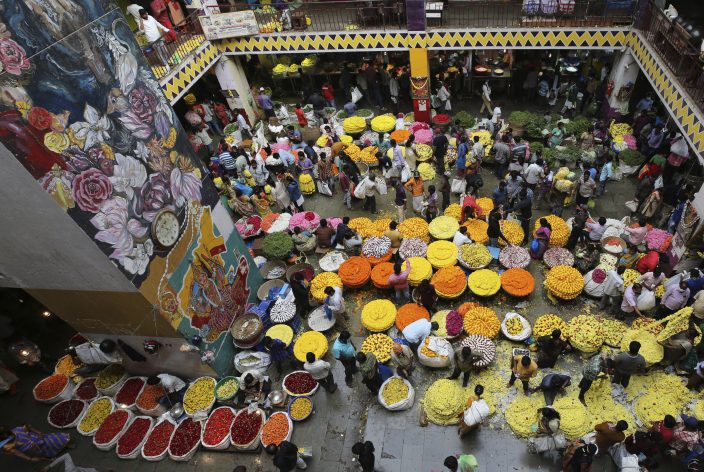 Indians shop for flowers ahead of the Hindu festival of Dussehra, in Bengaluru, India, Friday, Oct. 23, 2020. Health officials have warned about the potential for the coronavirus to spread during the upcoming religious festival season, which is marked by huge gatherings in temples and shopping districts. (AP PhotoAijaz Rahi)

“Police are investigating an incident where several police horses were hit in the face with a flagpole by a man. Thankfully the horses were not injured during the assaults,” a police statement said.

— South Korea has reported 77 new cases of the coronavirus, mostly from the greater capital area where officials are scrambling to stem transmissions at hospitals and nursing homes. Figures released by the Korea Disease Control and Prevention Agency on Saturday brought the country’s caseload to 25,775, including 457 deaths. Among the 1,484 active cases, 60 are in serious condition. Fifty-nine of the new cases were reported from densely populated Seoul metropolitan area, which has emerged as the epicenter of the outbreak since summer. Hundreds of cases have been linked to a handful of hospitals and nursing homes. Officials are testing thousands of medical workers to stem infections. Eleven of the new cases were tied to international arrivals, including passengers from the United States, the Philippines and India.