The bushy beard, the pine tar stain on the back of his No. 10 Los Angeles Dodgers jersey and all of those postseason hits.

Justin Turner is one of the constants for the Dodgers during their third World Series in four years, and his Duke Snider-matching homer in the first inning of Game 3 put them ahead to stay on way to a 6-2 win Friday night for a 2-1 series lead over Tampa Bay — and halfway to their first championship since 1988. 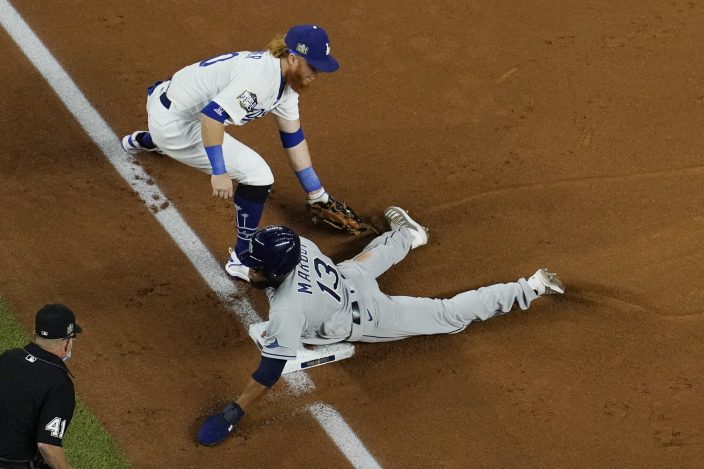 A month shy of turning 36, Turner also scored after a double and showed off a nifty glove at third base.

That stain created by aggressive practice swings may cover half of his name on his back, but he is a very familiar figure in the October — this was his 17th World Series game.

Turner, who earlier this month passed Steve Garvey for the most postseason hits in franchise history, hit a solo shot in the first off Charlie Morton to match the 11 homers hit by Snider — the Hall of Fame center fielder who played for Dodgers World Series championship teams in Brooklyn and Los Angeles. Turner's 40 RBIs are Dodgers postseason record.

All of the postseason homers for Turner have come in the past four years. Only Nelson Cruz (17) and Jim Edmonds (13) have hit more homers in the postseason after turning 30, after none before that.

His record 18th postseason double came in the third before scoring on Max Muncy’s two-run single for a 3-0 lead. Turner had a couple of fine plays in the bottom half, stepping back to field a hard grounder and making a strong throw to retire Willy Adames, then reaching up to grab a hot chopper that started an inning-end double play.

And those came when the versatile infielder wasn’t roaming around during the various defensive shifts incorporated by the Dodgers. He is often on the move after two strikes, venturing from closer to third base to the other side of second.

While he was hitting only .216 since the end of the regular season going into Game 3, Turner went 2 for 4 to extend his postseason on-base streak to 11 in a row.

Turner has 75 hits in 69 postseason games, all with the Dodgers since 2014 after joining the team as a free agent. He passed Garvey's record 63 hits in Game 3 of the NL Division Series against San Diego at Globe Life Field, the new Texas Rangers' ballpark where the World Series is also being played.

That came after he hit .307 in the regular season, which he ended by reaching base safely in 31 consecutive games with a plate appearances— his career long, and the second-longest in the majors this year behind the 33 in a row by Atlanta's Freddie Freeman.

Turner is at the end of a $64 million, four-year contract he got in free agency to re-sign for the Dodgers before the current run of World Series. He has been part of seven of their eight consecutive NL West titles.

The coronavirus outbreak that dela ...

Nissan pulls out of Trump emissions fight with Californ ...

Nissan said Friday that it will no ...