Up 2-1 in the World Series, the Los Angeles Dodgers have math on their side against the Tampa Bay Rays.

Here’s one number, courtesy of closer Kenley Jansen, that could mean as much as any: 95.2.

After slumping for weeks with slipping velocity and toothless bite on his signature cutter, the big man at the back of LA’s bullpen delivered his hardest fastball in over a month while closing out a 6-2 Game 3 victory on Friday night. 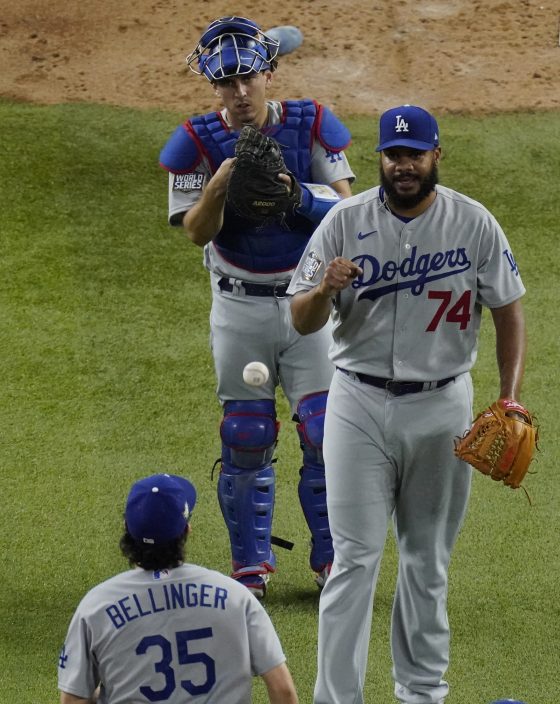 The 95.2 mph fastball that struck out All-Star Austin Meadows in the ninth was Jansen's hardest since Sept. 2. Despite allowing a homer to Randy Arozarena, the right-hander looked as if he has overcome the struggles that briefly cost him the closer's job he's held for years.

Thirty-eight of 59 previous teams that won Game 3 for a 2-1 Series lead wound up lifting the championship trophy. Holding that advantage will be much easier if the Dodgers' longtime closer has his best stuff.

Jansen has been a bullpen fixture for LA during its run of eight straight NL West titles, but the 33-year-old's stuff began to back up in 2018, the same season he was sidelined by an irregular heartbeat that prompted corrective heart surgery that November. The right-hander has been good — if not quite great — the past two years.

He became wholly unreliable early in this postseason. His velocity sagged in late September, and he topped out at just 91.3 mph in his first playoff outing, a wild card-round game against Milwaukee on Sept. 30 in which he escaped with a save despite poor stuff and command.

A week later, he allowed two runs and nearly blew a three-run lead against San Diego in Game 2 of the NL Division Series. He was removed from the game — and from the closer's job entirely.

Jansen didn’t pitch at all in LA’s next three games, taking a week off in which he and the coaching staff studied his mechanics and tried to get him on track.

He re-emerged with a scoreless, 10-pitch outing during a blowout win against Atlanta in the NL Championship Series — albeit, without cracking 92 mph. Two nights later in Game 5, he struck out the side in the ninth inning of a non-save situation against the Braves, reaching 94.5 mph. He earned the save in Game 6, going 1-2-3 in the ninth with similar velocity.

Given five days off, Jansen returned Friday with even more in the tank.

He started with a three-pitch strikeout of Meadows capped by his best heater. Then he threw two quick strikes to another All-Star, Brandon Lowe, before Lowe popped out to right.

Jansen worked a 3-2 count to Arozarena, a fastball-hunting breakout star this fall, before the rookie turned on a center-cut sinker and drove it out for a solo homer. Ji-Man Choi flied out three pitches later to end it.

The homer aside, it was as promising an appearance as Jansen could have had. Eleven of his 15 pitches were strikes, and since his hiatus from the closer's role, he's thrown 34 of 43 pitches in the zone.

The entire back of the bullpen for Los Angeles looked sharp after going unused in Games 1 and 2. Blake Treinen was up to 98.8 mph with his bowling-ball sinker and struck out two during a perfect seventh. Brusdar Graterol followed with an effortless fastball that reached 102 mph and got through the eighth on just seven pitches.

Pelicans coach Stan Van Gundy out after 1 season at hel ...

This time, the Netherlands never l ...

Just a few miles from the home whe ...