It’s a major life milestone, the first time many U.S. teens have ever been on their own. Even in normal times, freshman year in college can be a jumbled mix of anticipation, uncertainty and emotional highs and lows.

In these hardly normal times, when the quintessential college experience exists only in catalogs, freshmen are being challenged like never before.

Amid pandemic restrictions aimed at keeping students safe and healthy, colleges are scrambling to help them adjust. But many are struggling. 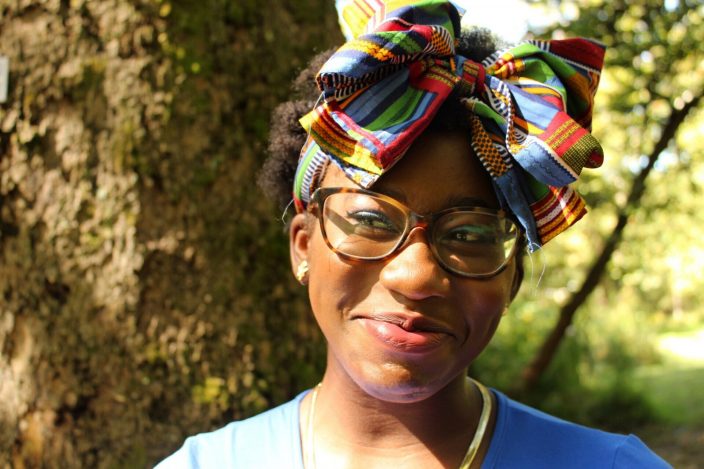 In this Sept. 30, 2020, photo provided by Victoria Ujunwa, Miracle Okoro poses on the University of North Carolina Asheville campus in Asheville, N.C. Some classes are being held in person at the university, but on many days the campus looks like a ghost town, said Okoro. “It’s not easy to be able to thrive in this environment where it’s your first year in college, your first experience in the real world and having to do it in such an isolating way,‘’ she said. (Victoria Ujunwa via AP)

This is freshman year 2020 for many college students nationwide.

“There is a lot of stress and distress among students now,” said Mary Ann Takemoto, interim vice president of student affairs at Cal State Long Beach near Los Angeles, where most classes are online. 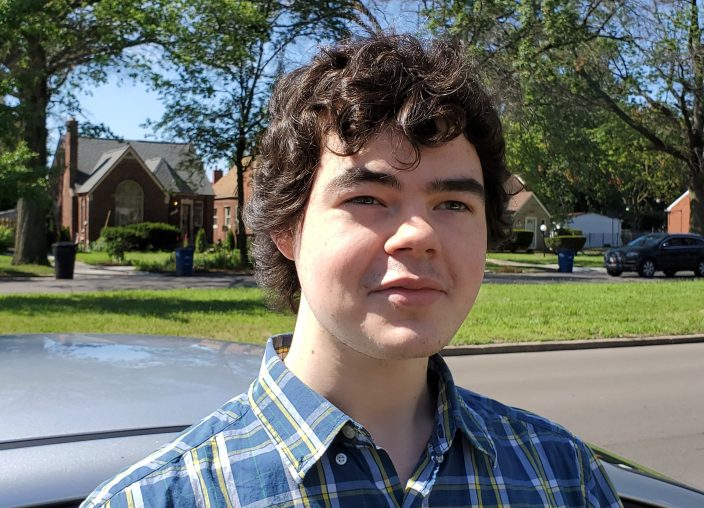 This Aug. 6, 2020, photo, provided by Magda Pecsenye shows her son, Robert French in Detroit. French is a student at Warren Wilson College’s rural campus outside Asheville, N.C. After battling a mild case of COVID-19 in the spring and being sequestered with his family during Michigan’s emergency restrictions, French was looking forward to getting away and making a fresh start. He found that daily campus life begins with temperature checks before breakfast and color-coded stickers to wear indicating no fever. (Magda Pecsenye via AP)

Freshmen in particular “feel a little more fragile” than usual. “They feel overwhelmed by a lot of things going on as we approach this election. There’s this increasing national anxiety,’’ she said.

The Long Beach university offers an array of online resources on reducing stress, improving study habits, and where to go for counseling and other help. Takemoto said less than three months into the fall semester, almost 200 students — about 25% of them freshmen — have been referred to a campus counseling and crisis center. Five in one week went to psychiatric hospitals, a number more typical of an entire semester. While Takemoto didn’t have specifics on those students, she said some were likely freshmen.

“Sixty percent of our students are students of color. Many do not have technology hot spots, many do not have a good place at home for studying,” Takemoto said. The university has made efforts to loan laptops to needy students, but “we still know that it doesn’t always work.’’ 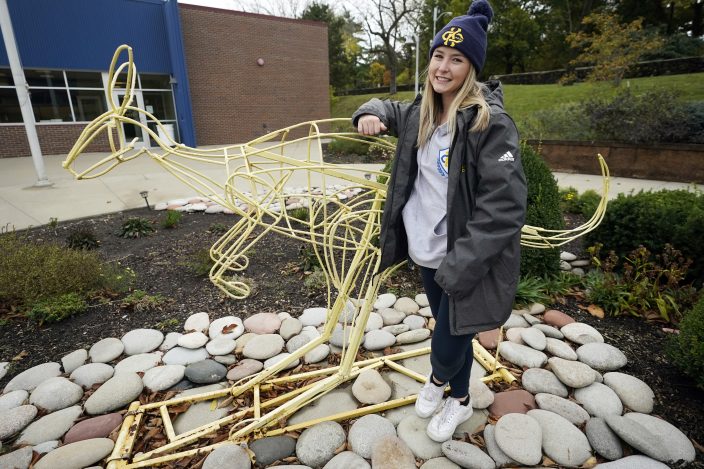 Madison Zurmuehlen stands next to a sculpture of the University of Missouri-Kansas City's mascot outside the soccer facility in Kansas City, Mo., Friday, Oct. 23, 2020. Amid pandemic restrictions aimed at keeping students safe and healthy, colleges are scrambling to help them adjust. Zurmuehlen said daily practices, with masks, are “the one thing I look forward to,” so it was tough when campus sports were canceled for two weeks after an outbreak among student athletes and staff. (AP PhotoOrlin Wagner)

Freshman Santiago Mayer, who moved with his family from Mexico to California two years ago, said he’s a naturally optimistic person trying to make the best of a “nightmarish’’ time.

He lives at home and said it’s often too distracting to focus on online classes so he spends his time on other pursuits. That includes a political campaign he helped create that encourages high school graduates to don their unworn prom clothes while voting in upcoming elections.

“At this point I’ve completely forgotten about having a normal freshman year,” Mayer said.

At the University of North Carolina, Asheville, some classes are being held in person but on many days the campus looks like a ghost town, said Miracle Okoro, 20.

“It’s not easy to be able to thrive in this environment where it’s your first year in college, your first experience in the real world and having to do it in such an isolating way,’’ she said.

Originally from Nigeria, Okoro works as a student health ambassador, a campus program in which students encourage their peers to engage in safe and healthy behavior and steers them to campus resources and activities. These include daily mental health and fitness breaks, a pen pal program to help students make friends online, and arranging serenades by performing arts students outside housing for those who’ve been exposed to the virus or become ill.

Health ambassadors and other campus groups also hold online support sessions after stressful events, including the COVID-19 death of a student at nearby Appalachian State in late September, and less than two weeks later, an email threat to administrators demanding removal of a campus Black Lives Matter mural that Okoro had worked on. In response, the university imposed a day-long shelter-in-place order Oct. 9.

“It caused students anxiety and a lot of fear across the whole campus,” particularly students of color, Okoro said.

Unnerved, she spent the following week at her family’s Charlotte home, then returned to find an increased police presence on campus, creating mixed feelings for some students.

“It hasn’t been easy,’’ Okoro said of freshman year so far, but added, “I don’t wallow in it.”

“I think that is something a lot of Black people have grown up with,” she said. “The ability to take in your circumstances and try to move past them. What are you going to do — not survive? There’s no choice but to get through it.”

After battling a mild case of COVID-19 in the spring and being sequestered with his family in Detroit during Michigan’s emergency restrictions, French was looking forward to getting away and making a fresh start.

He found that daily campus life begins with temperature checks before breakfast and color-coded stickers to wear indicating no fever.

Some classes are online only, which he finds alienating. And one in-person class switched to online when the instructor was exposed to the virus. French said that has made it tough to interact with professors.

College-organized activities include cookouts, yoga classes and hikes, but French said the masks and social distancing requirements make it hard to form friendships.

Some students formed “germ families,’’ cliques whose members hang out and party together unmasked but don’t let other students join.

French said he eventually found his own group of friends, but said some freshmen are having a tougher time.

Em Enoch is one of them. A reserved 18-year-old from Indianapolis, she has already decided to go home and finish the rest of freshman year with online classes.

Like at least 13% of U.S. teens, Enoch has a history of depression and said with all the virus-related campus restrictions, “being here has made everything feel like the world is ending even more than it is.”

Though there have been no confirmed COVID-19 cases on the Warren Wilson campus, she avoids the dining hall and other places that seem too risky.

“I don’t leave my room often, so I feel like I’m confined to this little space of existence,” Enoch said.

Still, Art Shuster, the college’s counseling director, said there’s been a smaller than expected uptick in students struggling with isolation and anxiety.

These are not new issues for a generation that sometimes relies on social media for connection, he said, noting that “the surge in mental health need has been ongoing for a number of years.”

Still, he said the college was anticipating an even greater need for counseling and similar services among this year’s freshman. They’ve missed out on some “pretty significant milestones.”

Madison Zurmuehlen got over a ditched prom and delayed graduation ceremony, but arrived at the University of Missouri-Kansas City to find other disappointments.

She’s on an athletic scholarship, but soccer season was moved from fall to spring.

She said daily practices, with masks, are “the one thing I look forward to,” so it was tough when campus sports were canceled for two weeks after an outbreak among student athletes and staff.

To stay safe, athletes are discouraged from hanging out with other students, and aren’t allowed to go home except for Thanksgiving break, she said.

She misses her family in the St. Louis area, and spends lots of time in her dorm room, either attending virtual classes or just hanging out with her roommate.

Her coach recently sensed that the team was stressed and arranged a virtual session with a therapist.

“He let us say how we were feeling in the COVID times and gave us ways to feel better about it,” Zurmuehlen said

“What felt helpful,” she said, “was knowing my other teammates were going through the same thing.”