Whether his strategy alters the outcome of what’s now the most expensive U.S. Senate race in history will depend on whether swing voters are set on removing Tillis — and potentially ending GOP control of the chamber — even if it means a replacement facing a sex scandal.

“Clearly Cunningham made a self-inflicted wound, but the question is what are voters really going to be focused on down the stretch?” asked Thomas Mills, a longtime Democratic consultant not involved in the race. 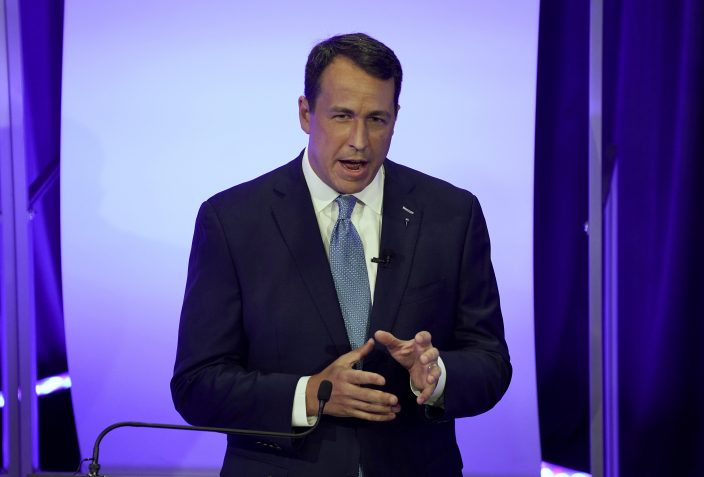 FILE - In this Oct. 1, 2020, file photo, Democratic challenger Cal Cunningham talks during during a televised debate with Sen. Thom Tillis, R-N.C., in Raleigh, N.C. Cunningham inched back into the public sphere on Wednesday, Oct. 7, a day after The Associated Press reported the he had an intimate encounter this summer with a public relations consultant. Within hours of the military disclosing that it is investigating Cunningham, a lieutenant colonel in the Army Reserve, he rejected the idea that the race with Tillis had turned into a referendum on his character, even while expressing remorse for extramarital activity. (AP PhotoGerry Broome, Pool)

Cunningham acknowledged three weeks ago that he exchanged sexually suggestive texts with a woman who is not his wife. A few days later, The Associated Press reported additional texts and interviews confirming they had an intimate encounter as recent as July — while Cunningham was deep in the hard-fought campaign.

Since then, Cunningham has largely stuck to tightly controlled virtual calls with interest groups that back him and small, unannounced in-person appearances so reporters can't ask questions. During the one online news conference he held, the Raleigh attorney and U.S. Army Reserve officer refused to directly answer whether he had had other affairs.

“I’ve taken responsibility for the hurt that I’ve caused in my personal life. I’ve apologized for it,” Cunningham told reporters on Oct. 9. “I’ve said what I’m going to say about it.” 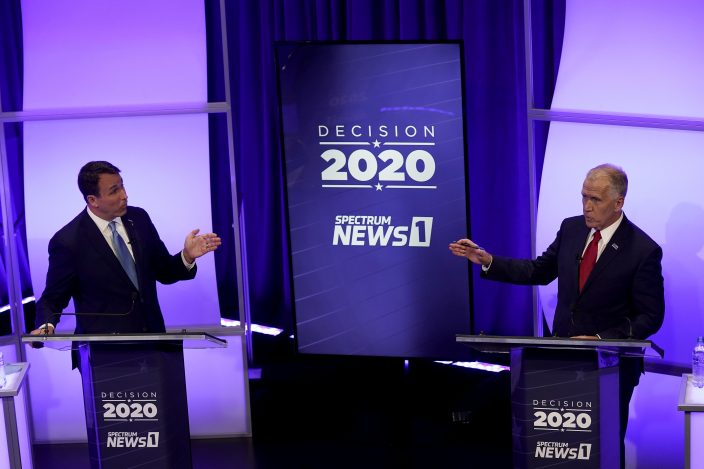 Tillis and Republican allies are jumping on Cunningham’s reticence, running ads that question his trustworthiness in contrast with his TV-commercial persona as an Army officer who rooted out corrupt military contractors in Iraq. Some feature veterans. Tillis' campaign also says he's given more than two dozen interviews since Cunningham's lone news conference.

Cunningham “has not been truthful and he has not been honorable,” Tillis said in an interview with The Associated Press. “And then that raises a question about whether or not you can believe anything he said up to this point in terms of what he will and will not do if he gets elected to the Senate.”

Cunningham has tried to frame the race on issues and ousting Tillis, who is seeking his second term. He's blamed Tillis for failing to expand COVID-19 relief and voting often to do away with President Barack Obama's health care law. Groups from the Human Rights Campaign to the North Carolina League of Conservation Voters to unions are coming to Cunningham's side.

“You’ve got to send Cal Cunningham to the United States Senate if health care is your issue in the state of North Carolina,” Brad Woodhouse, president of Protect Our Care, an organization that advocates preserving the 2010 health care law, said at a virtual event this week featuring Cunningham. No questions were taken from the news media.

Changes to campaigns nationwide amid the pandemic have made Cunningham’s low-key campaign profile seem less jarring. Tillis was diagnosed with COVID-19 in early October. He campaigned in person last weekend after recovering.

Cunningham’s campaign didn’t make him available for an AP interview. Instead, spokesperson Rachel Petri released a statement saying, “Sen. Tillis and his allies are relying on desperate, personal attacks to make their final appeal to North Carolinians because they cannot defend Sen. Tillis’ record." Cunningham himself makes a similar pitch in a TV ad that began running Friday.

National Democrats are committed to protecting their investment in the seat — one of several they’re spending heavily on to wrest from Republicans this year. They need to flip at least four to take back the Senate. North Carolina's is already the most expensive Senate race ever, according to the Center for Responsive Politics, with $246 million spent so far by the two candidates and outside groups.

Cunningham's campaign raised $28.3 million in the third quarter, quadrupling what Tillis' raised, and allowing the Democrat to hammer away with TV ads. Cunningham outraised Tillis again in the first two weeks of October, according to campaign reports.

But polls show the race narrowing, and the editorial boards of the Charlotte and Raleigh newspapers withheld an endorsement of Cunningham that they said they had been prepared to give him before the affair. “His lack of judgment ... should deeply trouble North Carolinians,” their editorial read. The papers did not endorse either candidate.

Republicans have emphasized how the U.S. Army Reserve is now investigating Cunningham. The military hasn't said for what, but adultery can be punishable under the military code.

Campaign operatives have said for months the outcome would depend on independent voters, who now make up one-third of the state’s electorate. With so many people voting early — nearly 3 million as of early Saturday — the universe of unaffiliated voters is shrinking quickly.

It includes Carol Hall, 56, an interior designer from Charlotte who switched her Republican registration last year because she didn't feel the party cared about moderates any more.

Cunningham “screwed up, there’s no doubt about it,” Hall said. But she said she’s still prepared to vote for him unless more sexual revelations surface. “He’s not the first politician to have an affair,” she added, pointing to the multiple allegations against Trump.

“It's troubling for sure, but I don’t think that those actions will change what he can do for North Carolina,” Hall said.

But Cunningham's activities are a game-changer for unaffiliated voter Brian Harbach, 39, of Greensboro, who was a Bernie Sanders supporter. The forecast analyst in the apparel industry said he's now voting for Tillis instead of Cunningham.

“We just can’t be sending low-character people to the Senate," Harbach said.

Cunningham concedes to US Sen. Tillis in North Carolina