The Latest on Game 4 of the World Series (all times local):

The Los Angeles Dodgers announced a tweak to their starting lineup just before they completed batting practice ahead of the start of Game 4. 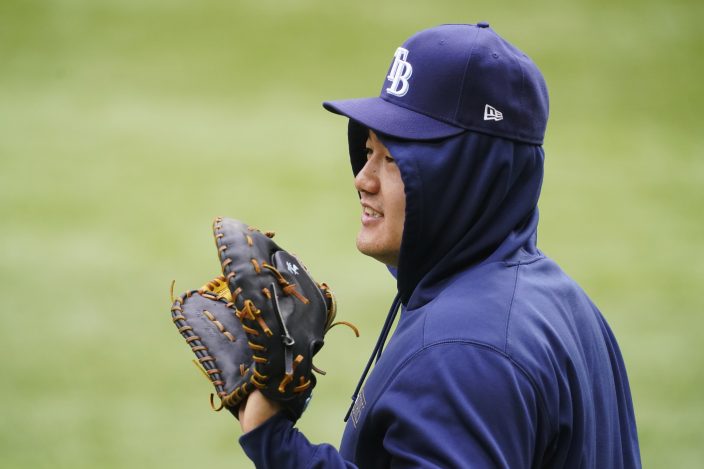 Just more than an hour before playing the Tampa Bay Rays, the Dodgers said Cody Bellinger would be the designated hitter and AJ Pollock would be in center field.

There was no immediate word from the Dodgers on why the switch was made.

Bellinger had started the first three games of the series in center field, and was there in the original lineup. He homered and had a leaping catch that robbed the Rays of a possible homer in Game 1 on Tuesday night, two days after he popped his right shoulder out of whack during an emphatic celebration of his go-ahead homer in Game 7 of the National League Championship Series.

The Tampa Bay Rays started four right-handed hitters at the top of their batting order and seven in all against Los Angeles Dodgers left-hander Julio Urías in World Series Game 4 on Saturday night.

Tampa Bay made one change from the players it started against lefty Clayton Kershaw in the opener, starting Mike Brosseau at third in place of Joey Wendle. The Rays started four right-handed hitters at the top of their batting order.

Los Angeles reverted to its lineup against left-handers for the matchup with Ryan Yarbrough, using the same batting order the Dodgers started in Game 2, except for dropping second baseman Kiké Hernández one slot to ninth and moving up left fielder Chris Taylor to eighth.

The roof was open at new $1.2 billion Globe Life Park after staying closed for the first time in the postseason for Game 3, when the game time temperature was 53 degrees.

Los Angeles led 2-1 in the best-of-seven Series, seeking its first title since 1988.

Tampa Bay is in the Series for the second time following a five-game loss to Philadelphia in 2008.

Urías pitched three perfect innings for the win in Game 7 of the NL Championship Series last Sunday and is is 4-0 with a 0.56 ERA in one postseason start and three relief appearances. He allowed earned run and seven hits in 16 innings with 16 strikeouts and three walks.

Yarbrough threw 19 pitches in the World Series opener, his only action since pitching five innings against Houston in the AL Championship Series on Oct. 13.