Clayton Kershaw could take the mound Sunday night with a chance to close out the Los Angeles Dodgers’ first World Series title since 1988.

“We’ve got to get the job done tonight,” he said before Game 4 on Saturday night. “I haven’t let myself think that far yet. But I know either way, I’m pitching tomorrow and hopefully it’s 3-1, for sure.”

The 32-year-old left-hander from nearby Dallas has spent all 13 of his big league seasons with Los Angeles. He is an eight-time All-Star, three-time NL Cy Young Award winner and the 2014 NL MVP. 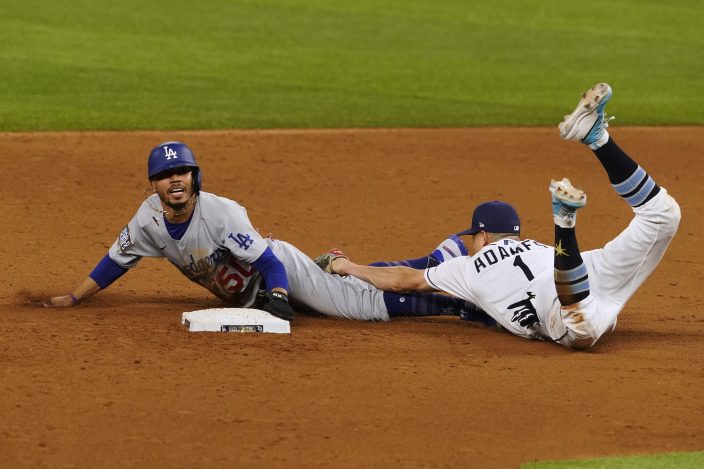 “When you’ve been working so long and so hard for one goal and it’s getting closer and closer with each win, it’s harder not to think about the end game and what that might be like,” he said. “But you just have to. ... So for me at least, it’s just a constant focus on the next day, the next game, the next pitch. And you just have to remind yourself, you just have to, really discipline yourself to do it.”

Kershaw beat Houston in the 2017 Series opener, allowing one run and three hits in seven innings against Houston, but failed to hold a 4-0 lead in the fourth of Game 5, a game the Astros won 13-12 in 10 innings. Kershaw came back on two days’ rest to enter Game 7 in the third with Houston leading 5-0 and pitched four shutout innings in a 5-1 loss. The Astros' sign-stealing scam was later revealed.

Kershaw lost the opener and Game 5 finale in 2018 against Boston, allowing nine runs in 11 innings. 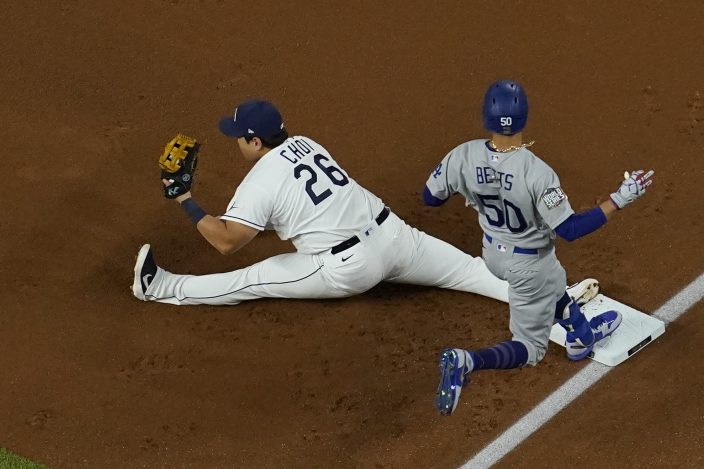 In Game 1 this week, Kershaw allowing one run and two hits in six innings. The Rays scored on Kevin Kiermaier’s fifth-inning homer.

“You definitely have to take into consideration what you’ve done against these guys in the past, in Game 1,” he said. “Any time that hitters see you, they get a little bit more of an advantage. ... You might have to change a few things up but for the most part, just continue to pitch the way that you pitch.”

Ji-Man Choi focused on getting more flexible after dealing with some injuries in the minor leagues. Now the 6-foot-1, 260-pound Rays first baseman is doing full splits in the World Series.

Tampa Bay fans have seen the Ji-Man stretches, but there is a much bigger audience for the World Series, where the South Korean did a full split to take the throw from shortstop Willy Adames for the first out in Game 3 on a grounder by Dodgers leadoff hitter Mookie Betts.

“I try my best to just grab the ball at the earliest point possible. More practice with that helped me with my flexibility,” Choi said through a translator Saturday.

Plus the fact that he said he has been doing Pilates for about two years.

“Ji-Man was talking about his Pilates ... yeah, he looks like a gymnast. He’s built like one,” manager Kevin Cash said, with a smile.

Choi is the first Korean-born position player to appear in a World Series game, which he called an honor while crediting the “special group of guy” — his teammates and them getting there together.

Mookie Betts made an impact on the Los Angeles Dodgers before even playing a game after he was acquired from Boston Red Sox. He addressed his new teammates the day of the team’s first full-squad workout in spring training.

“I was surprised,” manager Dave Roberts said Saturday. “He texted me the night before and he asked me for Clayton (Kershaw)’s number to text him and kind of ask his thoughts on it. And I was like, whatever you have to say, I’m going to support. Clayton felt the same way.”

Betts is a four-time All-Star and four-time Gold Glove winner who helped the Red Sox beat the Dodgers in the 2018 World Series. Roberts said Betts set the tone, from pitchers fielding practice to relay throw drills.

“It was just very genuine, very authentic. And there had been other times in hitters meetings where he’s kind of challenged guys in the best possible way to how to go about a team approach as an offense,” Roberts said. “Just understanding that if we do things the right way in spring training, we’ll do those things all the way through the World Series. So that kind of message resonated with everyone.”

Los Angeles infielder Max Muncy played high school baseball about 25 miles from the new Texas Rangers ballpark, and still lives in that area where he grew up. But he hasn't been able to go there, even though the Dodgers have been in North Texas for three weeks.

The postseason teams have been in a bubble environment since starting postseason play at neutral sites. For the Dodgers, that has been the same resort hotel about 15 miles from the stadium where they also played their NL Division Series and the NL Championship Series.

“You're so close and you're so far away,” Muncy said Saturday. “It's home to me and my wife, it's where we have our house. Not being able to go see that, see our friends, see our family, not even allowed to have our pets, you know it's just been extremely difficult. We're really close to the end, and hopefully it's something that's going to all be worth it."

Muncy said the first thing he and his wife will do after the World Series is pick up their pets, “and just go home and enjoy.”

Kershaw still lives in Dallas, and rookie right-hander Dustin May is from nearby Justin, Texas.

Frustrated by the flow of coronavi ...